From Lionel to Amtrak

My early fascination with railroad trains began when I received a Lionel train set one Christmas. Dad gave me a corner of the basement where we placed a piece of plywood on a couple of sawhorses.  We set up the oval track; added a few

buildings, a station, a tunnel, trees, crossing gates and a coal dispenser. There were little pills to put down the smokestack that puffed out white smoke as the engine chugged along. I’d have a great time sending that train round-and-round the oval track as I imagined all the exotic locales it visited

Growing up in the Boston suburbs, it was a great treat to take the real train into the big city. My mother took my brother and me into Filene’s department store to buy us our first suits. It was a big deal for a nine and ten year old — we were more interested in the train trip than the ordeal of being fitted for suits! As youngsters, we’d put pennies on the railroad tracks, then retrieve the flattened remnants after the train passed by. I don’t think my parents knew we were doing this — I hate to think our kids (or grandkids!) engaged in that kind activity! A few years later, the train service was discontinued and the MTA (the Boston subway system, made famous by the Kingston Trio) took over the track beds leading out to the south shore. A college friend and I once took a train from Boston to NYC. That was the extent of my early encounters with railroads — both the hobby type and the real ones.

For the next 50+ years, my train travel was spotty. While stationed with the USAF in Spain, a friend and I flew (standby on an Air Force transport) to Germany to visit his brother. On our return to Spain, we were both only able to fly as far as a base outside of Paris – just one seat left on the plane back to Madrid! We flipped a coin; he won the seat! Pooling the cash we had after partying in Germany, there was just enough to buy a Paris-Madrid train ticket. As a near penniless, early twenty-something with not a care in the world, I look back on that train adventure as one of the best times I’ve ever had! Years later, to celebrate our 40th wedding anniversary, Joanna and I relied mostly on rail to explore Denmark, Sweden and Norway. Our Scandinavian adventure was enough to get Joanna as enthusiastic about train travel as I was. We never got the chance to do more before she was taken from us in 2010.

On a recent trip to Texas to visit our son and his family, I decided to add a rail leg to the itinerary. I started my research by visiting the Amtrak website. Viewing the southern routes, it quickly became apparent there was no direct train link between the two cities. I chose to fly to Dallas for the visit and save the train leg for my return to Tampa. Even though it would result in a circuitous route back home, the Texas Eagle, with service between Dallas and Chicago, appeared to be my best return option. I could then fly back to Tampa from Chicago. I wasn’t looking for expediency here or the most cost-effective method of travel — this was to be my Amtrak adventure! 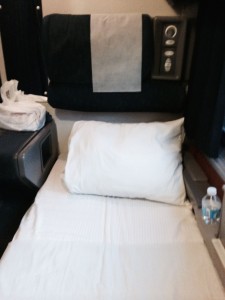 e 22+ hour trip from Dallas to Chicago.  It had two reclining seats on either side of a big picture window. At night, the seats convert to a bed. 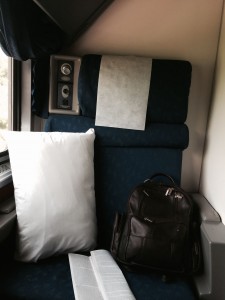 If there’s a second passenger, an upper berth folds down from above. In my case, I’d just need the lower. In addition to the privacy the
roomette provided, meals in the dining car were included in the price. These were not spacious accommodations; just 3’6″ X 6’6″. It was enough for me, but it would probably feel really cramped with two adults. There was a public sink and toilet just across the hall from my Roomette and a shower in the lower level of the car. If my next train adventure involves more than one night, I’ll probably upgrade to a Superliner Bedroom which has more space and private sink, toilet and shower. However, I had no real issues on this initial Amtrak experience. I can’t say I had a very restful sleep, but I honestly wasn’t expecting to!

My train had an on time arrival at Dallas’ Union Station. [I’ve got to do some research as to why so many cities’ train stations are named “Union” – even the small one here in Tampa has that name.] Greeted on the platform by the attendant, I elected to carry my own bag as he showed me to my cabin. Shortly after leaving the station, the dining car person stopped by to take my reservation for dinner.

As we rolled along through small Texas towns in the late afternoon/early evening, I was reminded of the TV series Friday Night Lights. For those uninitiated, Friday Night Lights was a program about football that was really about much more than football. Based on a book/movie of the same name, it took place in the fictional small town of Dillon, Texas and followed the lives of the head football coach and his family, the players and other town characters. As we passed cluttered back yards; school playgrounds; coffee shops; football fields and small town life, I just couldn’t get the image out of my head of these folks playing roles in one of my favorite TV series! 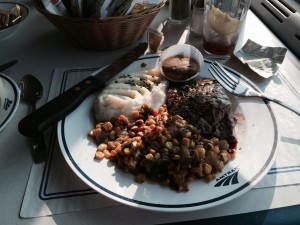 Since I was a single traveler, it was possible I’d be seated with up to three strangers in the dining car. This night, my dinner companion was a high school teacher heading back to Milwaukee after spending time visiting friends in New Mexico. The conversation moved along – train travel; baseball (Rays vs. Brewers, National vs. American League); Wisconsin vs. Florida and the food was good, too! I had the steak – it wasn’t a filet, but it was tasty. I was seated with the same person for breakfast the next morning. For lunch, my tablemate was a woman who had boarded in St. Louis that morning on her way to Chicago to meet up with her husband, who had made the trip earlier in the week for a business meeting. 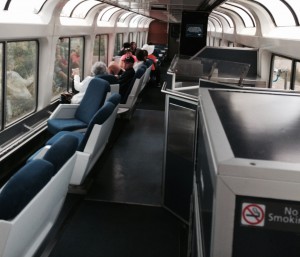 My Roomette was quite comfortable and I spent most of the trip there either reading or watching the world go by through the large picture windows. It was also nice to spend time in the observation car, where there were single seats, seats for groups up to five and tables for card games and laptops. Below the window-filled observation car was the café car. It sold snacks like hummus, pizza, chips, soda and beer and had its own booth seating area.

Early in the afternoon of the second day, we pulled into the station in Springfield, Illinois. Right outside my window at the back of a building, a man was practicing what appeared to be the ancient Chinese exercise Tai Chi. We were probably at the stop for 10-15 minutes and he continued with his exercise for the whole time – oblivious to the train right in front of him!

We had some delays along the way as we waited for cargo trains to use the rails. Several times we’d vacate the single track and move to a siding. We’d wait, with great anticipation, for the other train to roar past us at a very high rate of speed. Whooshhhhh! We also had a longer than expected stop in St. Louis. This put us into Chicago 3-4 hours later than scheduled. When planning this trip, I built in an overnight in Chicago, so spending a few more hours on the train was just fine with me! I was fascinated with of all the cargo, commuter and other passenger trains as we crept through the massive train yard in Chicago.

Chicago Union Station [there’s that name again!] is the third-busiest rail terminal in the US, after Grand Central and Penn Station, both in NYC. It was busier that day than many airports I’ve passed through. As I made my way to street level, I paused in The Great Hall – it was surprisingly quiet and tranquil compared to the hustle and bustle of the platforms, tracks and concourses below street level!

My Amtrak adventure was everything I’d hoped it would be. I’m looking forward to including rail travel as part of a future trip!

← A Walk Back In Time
My Friend Alan Shaw →
Home Page