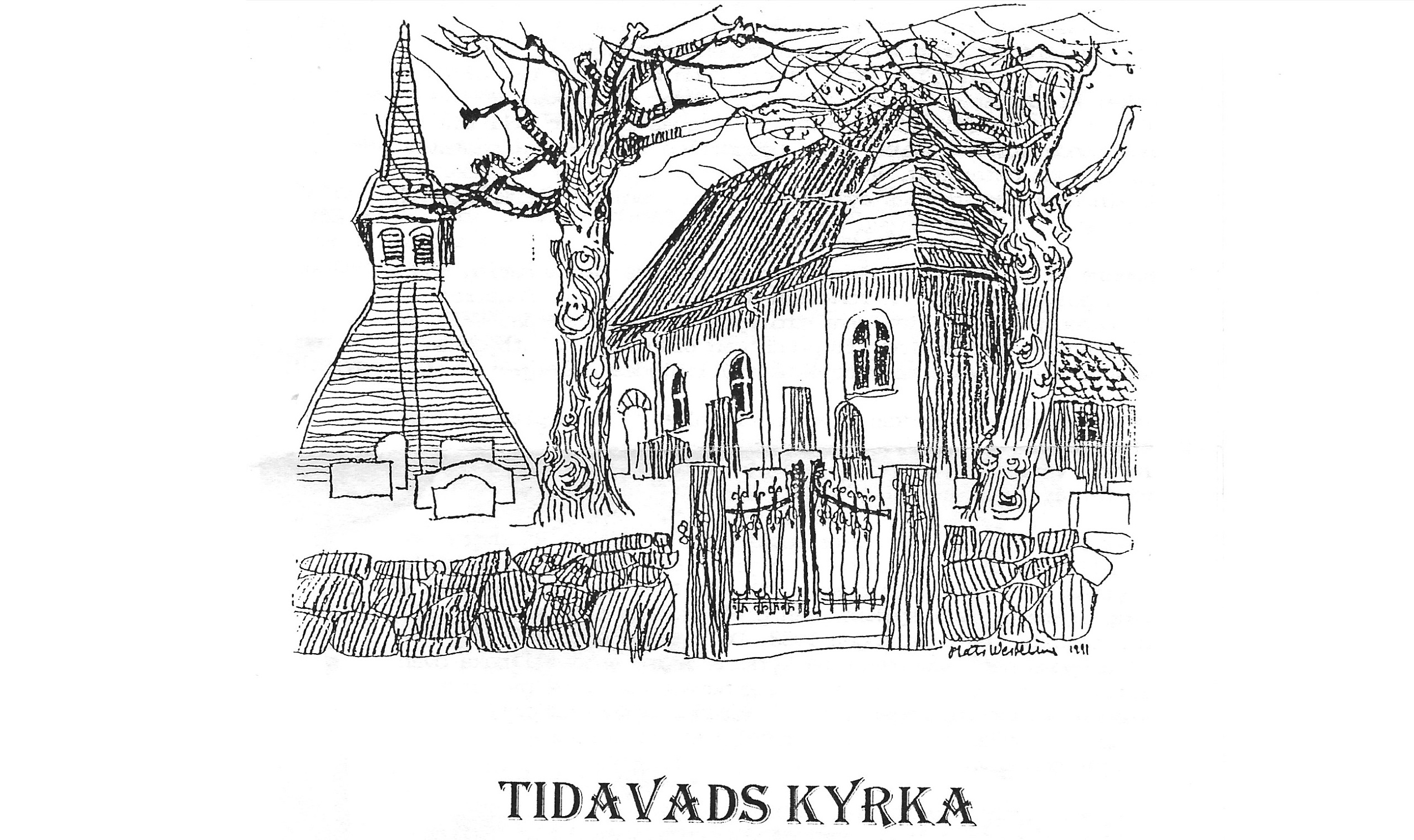 A Walk Back In Time

It was during a visit with my cousin Maureen in 1999 that planted the seed, resulting in this trip in 2005.  Maureen had shared with us a life story, as told by my uncle Alfred.  In it he described his parents emigration from Sweden and their early life in this country.  As we began preparing for our 40th anniversary celebratory trip, it was Joanna who suggested we travel to Scandinavia to visit the country of my grandparents’ birth.  Little did I know in the early stages that I’d actually walk the streets of Mariestad, Tidavad, Skövde and Göteborg!

In addition to Sweden, we also wanted to visit Denmark and Norway.  Although we prefer independent travel, we thought it might be wise this time to use a guided tour service.  We learned from Alfred’s story that Nana had been born in Mariestad but we could find no tours including that part of Sweden – and we would soon discover why.  So, a plan-it-yourself trip it was!

I contacted cousin Lois, the family genealogist, hoping she could provide us with some research material — and did she ever!  It contained massive amounts of demographic information as well as remembrances recorded from my dad’s siblings.  It wasn’t long before cousin Pat, unsolicited, sent me a Family Tree Maker data file containing the results of her research.  This new information, combined with Alfred’s Story, allowed us to firm up our itinerary.  We decided to limit our travels to Nana’s region of Sweden, for a couple of reasons:  (1) I had strong memories of Nana but never knew my grandfather and (2) there was a relatively great distance between their birthplaces. I’ll not bore you with details of our entire Scandinavian excursion, but I do want to record for my extended family, the details of our remarkable walk back into the history of the Johnson clan. As I understand Nana’s life in Sweden:

With the exception of Forshem, we visited each area in a whirlwind thirteen-hour circuit.  Our journey took us by train from Göteborg (which served as our base) to Skövde; by bus to Mariestad; by bus to Tidavad; by bus back to Skövde and by train back to Göteborg.

Mariestad, a picturesque town sitting on the banks of Lake Vänern, contains a mix of centuries-old structures, cobblestone streets along with some modern buildings, including the ubiquitous McDonald’s – not on our itinerary!  The town square is bordered by the large old hotel Stadshotellet on one side facing a greenway down to the river Tidan.  The other two sides of the square contain shops and restaurants.  Two streets leading up to the plaza consist of shops, a

bank and few restaurants.  The bell tower of the Mariestads Domkyrka, a church sitting on a rise at one end of the town center, can be seen from a great distance.  We spent our time at Mariestad in the older area near the town center, strolling the streets, snapping photos and getting a sense of the town.  After a traditional Swedish lunch, we rested on a bench across from the bus station and people-watched while waiting for the Tidavad bus.  There were old folks from the nearby nursing home negotiating the sidewalks while teenagers zipped down the street, car radios blasting.  Life goes on in Mariestad.

We shared the thirty-minute ride to Tidavad with students being dropped off at stops along the rural winding road.  I assured Joanna we’d arrive at the Tidavad bus station and not be deposited roadside.  Boy, was I mistaken!  The bus stop is in front of the general store – the only commercial establishment we saw in our two-hour visit.  I think hamlet best describes Tidavad.  Joanna confided to me after our visit that, as we stepped off the bus, her first thought was “how are we ever going to find enough to keep us occupied for two hours in this place!”

As we’d approached the bus stop, we noticed a church a few hundred feet away and figured this was the most logical, and quite possibly the only, place to begin our visit. The small white church, Tidavads Kyrka, is situated directly off the road on a slight rise.  A cemetery surrounds a wooden bell tower to the left of the Church.  To the right of the parking lot at the street is a small red building, the Kyrkstugan (church cottage) – the fellowship hall, as we know it.  There were a few young girls on the steps of the kyrkstugan who waved to us as we approached

.  As we took the few steps up to the churchyard through iron gates, we noticed a man and a woman who appeared to be tending to the graves.  We nodded to them as we strolled through the small cemetery searching for familiar names – particularly Schon.

The cemetery contains only a small number of gravesites, so we were able to check the headstone

s in a matter of minutes.  Coming up empty-handed, we approached the woman we’d greeted upon our arrival.  I asked if she spoke English, and she said “Yes, a little.”  [An aside:  We had been told that most people in Sweden speak some English, with the younger generation speaking it more fluently than the older.  Our experience up to that point proved this to be true.]  We judged this woman to be in her mid-sixties – the “older” generation, as are we!  We introduced ourselves and learned that Margareta Eklund had lived in Tidavad all her life.

We shared with Margareta our mission to find any trace of the Schon family.  She pondered that for a moment, and then said she remembered stories her father told of having attended school with a Gerda Schon whose family had all died of a disease.  Not having our family tree committed to memory, I consulted some of Lois’ material.  Sure enough, Gerda Schon (daughter of Algot Schon – Nana’s brother) was the surviving member of her family following a TB epidemic.  Lois’ note states that Gerda may have been later adopted.

We had stumbled onto a trace of Nana’s past!  Margareta enthusiastically said she could show us where Gerda had lived!  She’d traveled to the church by bicycle; we’d co

me to town by bus.  She indicated walking the “Swedish mile” to the homestead was not an option.  Agneta Ström, the church organist who was holding choir practice in the kyrkstugan, quickly agreed to loan Margareta her Volvo.  So, off we went!

As we rode along the roads of Tidavad, Margareta described that many of the small farms are slowly being bought up by large foreign-owned (Norwegian) companies.  This is changing the landscape of her beloved Tidavad.  She and her husband recently passed their farm on to one of their three sons.  They now live in a small house a short distance from the farm.  Soon, we approached the house in which Gerda once lived.

According to Lois’ material, upon Johannes Schon’s death, his home, garden and cow were given to his son, Algot.  The remainder of the family, including Nana, then moved to a soldier’s cottage belonging to Lastads Nolgard.  It is unclear whether the house in front of us was the Schon homestead from which Nana moved, or if it was the house in which Gerda, her cousin, lived after she was adopted.  In either case, it was an awesome experience just standing there!

Margareta then drove us to the Odensåker Church.  She explained that this is the district church over several smaller churches in the area, including the one at Tidavad.  It was from this church

that some of Pat and Lois’ research material was obtained.  At the road below the church is a well-preserved farmstead from the 18th century.

Upon our return to Tidavad, Margareta invited us to view the interior of the church.  It’s a beautiful small old structure with masonry walls, a stone floor and a magn

ificent fresco-painted wooden ceiling.  Had Nana been baptized at this centuries-old stone font?

We thanked Margareta and Agneta for the kindness and generosity they showed to a couple of complete strangers from America.  We left to wait for the return bus ride to Skövde, while Margareta returned to her gardening and Agneta her choir practice.

We spent a relatively short time in Skövde – a few minutes in the morning as we waited in the train station for the bus to Mariestad and a couple of hours in the evening on our return leg.  It’s a fairly large city with some heavy industry, including a Volvo plant.  During the evening stay, we did have a chance to walk the streets a bit and have a light supper before boarding the train back Göteborg.  Near the center of town sits a church.  Could the priest of this church have signed Nana’s emigration papers?  I regret not having been able to search for the Petersborg address Lois’ documents had for Nana at the time of her emigration. 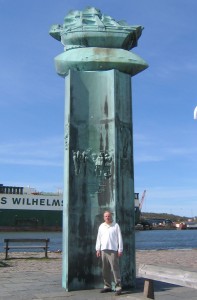 Göteborg, Sweden’s second largest city, is a bustling metropolis.  It was from this port city where tens of thousands of Swedes, including Christina Schon, left their homeland during the late 19th century to start a better life in the new world.  We visited the stone pier at the harbor upon which stands a copy of Carl Milles’ statue commemorating the emigration.  The original was presented to the city of Wilmington, Delaware.  It was a very proud moment to stand at that monument.

At dinner on our last night in Göteborg, I saw Mariestads beer on the menu and had to order a bottle.  I thought it rather ironic that here I was in the city from which my Grandmother departed her native land to an uncertain life – and I was about to drink a beer brewed in the area of her birth!  I lifted my glass to Christina Schon, August Olaf Johnson, their siblings and all generations that followed. My sincere hope is that you some day have the opportunity to experience an adventure similar to the extraordinary one Joanna and I had!