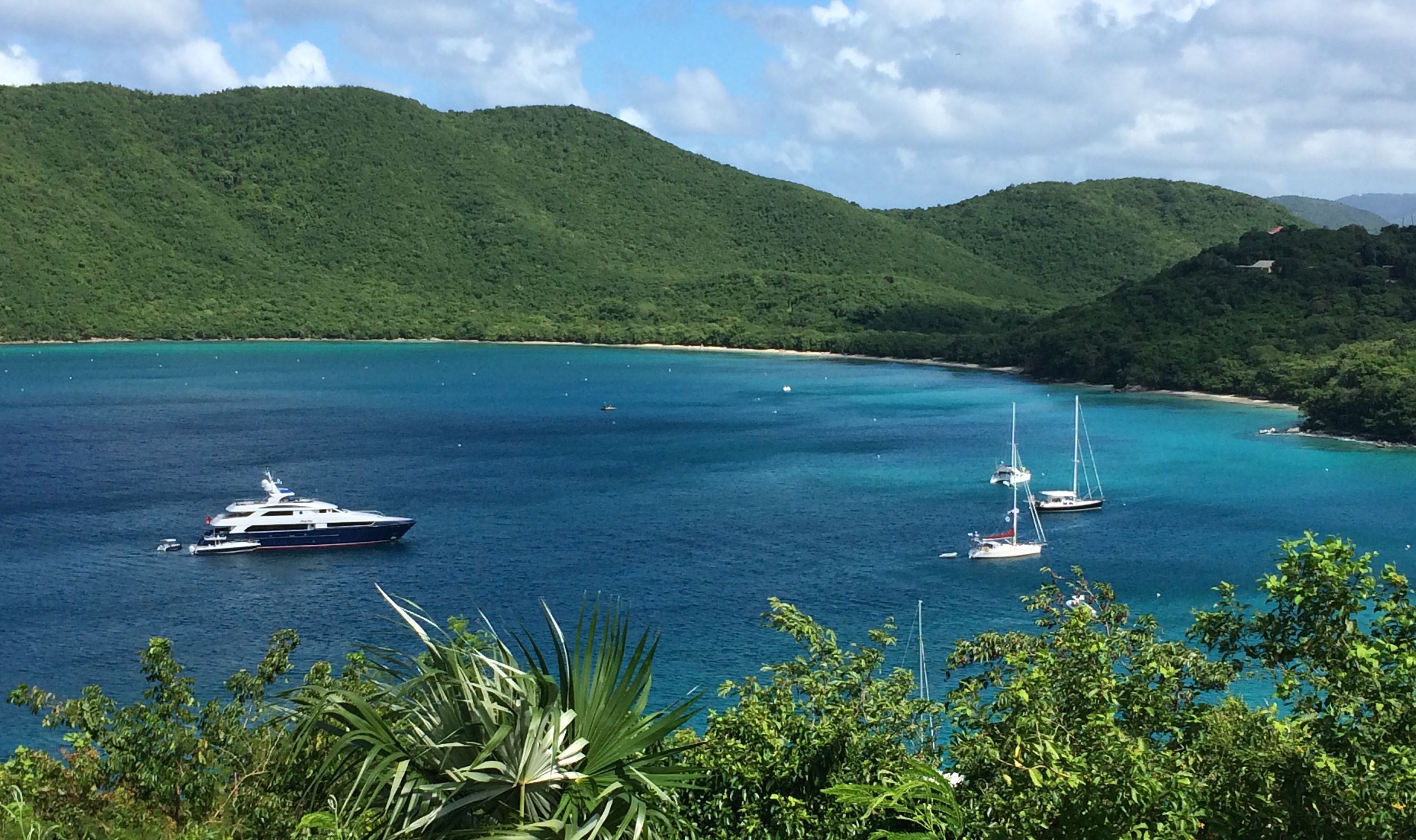 A Week on St. John, USVI

Joanna and I visited the US Virgin Islands in January of 1998 — spending a few days on St. Thomas, taking a day trip over to the island St. John. We finished up with several days at The Buccaneer on St. Croix. That day trip to St. John left us wanting to spend more time there. Although Joanna was no longer with me, the chance to make that happen came during the week of Thanksgiving 2014.

After a bit of research, I booked a condo in the Cruz Bay area. It was centrally located, within walking distance of the ferry and close to an array of eating and drinking establishments. A long day’s travel — a couple of plane rides and a ferry from St. Thomas brought me to the dock at Cruz Bay. Chara, an agent from the management company, was there to meet me. After a short walk to the condo and a few pointers from Chara, I was all set for my seven days of exploring the island!

St. John is the smallest of the three main US Virgin Islands. Rugged and mountainous, it’s about 9 miles long and 5 miles across at its widest point. Virgin Islands National Park comprises over 50% of the island. One can find many pristine, remote beaches; remnants of the former sugar cane plantations; and breathtaking vistas. My intent was to venture out and enjoy as much as I could of what the island had to offer!

My first morning, I walked to Jake’s restaurant, where I had a great breakfast and, more importantly, encountered a very friendly waitress. She showed me on my map some of the highpoints she felt I should visit. As snorkeling and hiking was high on my agenda, she recommended Waterlemon Cay, reached via the Leinster Bay Trail. This was already on my to-do list — her recommendation sealed it!

My first stop was the National Park Visitor Center. Prior to the trip, I had purchased and studied some area maps. I found Pam Gaffin’s book St. John: Feet, Fins & Four-Wheel Drive really helpful. The Visitor Center had an interesting display depicting the history of the area from its early Indian settlers; to the era of Danish and Dutch sugar plantations worked by African slaves; to the purchase of the island by the US in 1917. The staff was helpful in providing additional information and maps.

Salomon Beach, within walking/hiking distance of my home base, was the first of my adventures — and became my favorite spot!

There are only two ways to get to this gem – by boat or a mile hike on the Lind Point Trail beginning behind the Park Visitor Center. No boat; so, the hike it was! Considering I had my beach chair, snorkeling gear, towel and water supply strapped to my back, it really wasn’t a difficult trek. There were a few up/down inclines; some nice flat areas and some rocky areas that forced me to be mindful of my steps. After about 30 minutes, I could hear the surf and knew I had arrived.  A beautiful, secluded stretch of sand and water! No crowds — probably because of the perceived difficulty of the access. Good snorkeling near the rocks at the far end. Over the week, this became my go-to spot!

To explore beyond the Cruz Bay area, I rented a four-wheel drive vehicle. I was a bit wary at first because on St. John they drive on the left, but with left hand (like in US) driven cars. Also, there are many steep hills and hairpin turns. The max speed on the island is 35 mph, but I was rarely out of second gear and mostly at or below 20 mph the whole time. I had to constantly remind myself to stay left, stay left, stay left! I strayed into the right lane a few times, but overall it worked out alright!

Many of the more popular beaches are along the north side of the island: Caneel Bay, Hawksnest, Jumbie, Trunk Bay and Cinnamon Bay to name a few. The North Shore Road was my first excursion outside of Cruz Bay. On our previous visit here, Joanna and I spent a few hours at Trunk Bay. It has an interesting underwater snorkel trail. However, it’s generally pretty crowded there, so I skipped it on this visit

At the end of the North Shore Road lies the 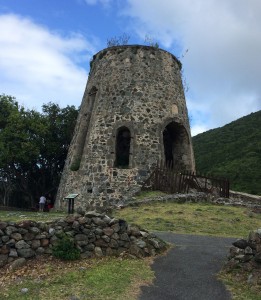 Annaberg Sugar Mill Ruins. It is reported to be the most intact sugar plantation ruins in the Virgin Islands and is maintained to keep the memory of those times alive when slaves were forced to work gruelling hours on the plantations. In 1733 the slaves organized a revolt which ultimately led to the abolishment of slavery.

Remnants of the windmill and a few other structures tell of the sugar production process at Annaberg that was still operating into the late 1880’s. From here are spectacular views of the nearby British Virgin Islands.

At the bottom of the hill leading up to the ruins, is the start of the Leinster Bay Trail leading to Waterlemon Beach. 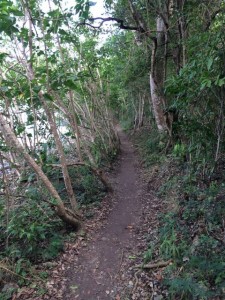 Prior to a hurricane in 1995 this trail was navigable by 4-wheel vehicles. It was not restored after the hurricane so as to lessen the 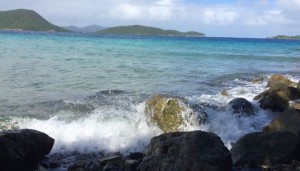 impact on the reef. Today it’s an easy .8 mile hike along the shoreline over relatively flat terrain. At the end of trail, lies Waterlemon beach. There’s a little island in the bay, called Waterlemon Cay, that reportedly has the best snorkeling. I had read warnings that “you had to be a decent swimmer in reasonable to condition to get to the cay. Don’t chance it if you’re doubtful of your abilities!” I didn’t doubt my abilities, but since this was a solo adventure, I decided to limit my underwater exploring to the confines of the beach area!

The Peace Hill Trail is a short, steep, 10 minute trail that goes up the hill to the site of some windmill ruins and a spectacular view of the Hawksnest Bay. This piece of land was donated to the National Park in 1953. 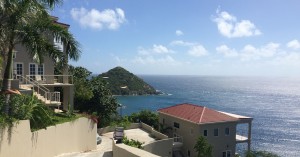 The southwest side of the island is outside of the National Park area, therefore more populated. At Chocolate Hole (above) and Klein Bay (below), beautiful and very expensive homes cling to the cliffs overlooking the sea. Million dollar views! 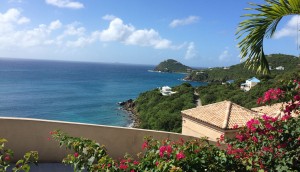 Had lunch one day at the Chateau Bordeaux restaurant. One doesn’t go to this place for the food; it’s average. The breathtaking view of Coral Bay and points east from this ramshackle bar/restaurant hanging off a cliff is what draws the crowds. Absolutely stunning!

On my last full day on the island, I booked a snorkeling charter to one of the offshore cays. Although the Calypso, could handle parties of 25 or so, this day there was just eight of us – a family of four, along with three

friends of the college-age siblings and me. Coincidentally, they lived one town over from the one where I grew up in Massachusetts. Small world! Snorkeling around Henley Cay was fantastic! I even saw a Nurse Shark fast asleep in the reef — at least it looked like it was sleeping!

Although the condo had a full kitchen and I did stock up on some essentials, I never had more than a breakfast or two there. I’d have a cup of coffee on the patio each morning as I watched daybreak over Cruz Bay. One morning a brief rain shower resulted in a rainbow over the bay.

I enjoyed sampling food at several of the restaurants. One evening, I had some of the best ever spicy jerk marinated chicken at the outside bar of the Cruz Bay Landing restaurant, washed down with a few bottles of beer! It was so good! On Thanksgiving, I went to the Fish Trap restaurant expecting to have (what else!) a nice seafood meal. To my surprise they were featuring a full-blown turkey dinner right down to pumpkin pie — how could I resist! My absolute favorite place for dinner and drinks was the Waterfront Bistro. One night it was scallops; another night, steak. Stopped in one evening for key lime pie and a nightcap — just couldn’t get enough of that place!

Before I went on this adventure, an acquaintance was incredulous that I would make such a trip by myself. This person didn’t understand that for 45 years, Joanna was my partner — we did everything together. To return to the place she and I visited briefly nearly seventeen years earlier felt so good. Joanna was with me every step of the way!