Joy In The Ordinary

Upon my mother’s death in 1989, William Sullivan, the obituary editor of the Patriot Ledger, called the house to tell us they occasionally write “feature obituaries” that recount the lives of everyday residents. He wanted to write one about my mother. I explained she was a very modest woman who never really wanted the spotlight on herself – she was proud when her children were given attention, but didn’t want it for herself. However, we felt this was a great opportunity for us share with the community what a wonderful mother she had been. I told Mr. Sullivan she would never want her age printed in the newspaper – it was not for reasons of vanity, just an old fashioned view that a woman never discloses her age! He agreed to that one concession.

On Saturday, February 25, 1989 the obituary, Althea Johnson, Took Pride in Being a Homemaker, appeared in the paper! Excerpts from it….

[One son] especially remembers the Swedish meatballs she made from a recipe handed down by her husband’s mother. “She liked cooking and was very good at it,” her son said.

Mrs. Johnson was fond of flowers and used the motif in her many handicrafts. …[she] made many rugs which she gave to her sons and daughter and used in her own home. Her braided rugs were colonial-style with alternating colors while her beautiful hooked rugs had floral patterns.

She managed to keep a section of the yard planted with flowers while her husband put his talents to growing vegetables. [She] had difficulty getting around for the past several years so her husband planted planted flowers in the yard near the windows so she could look at them. …She also did several tray paintings, having studied the art in an adult class in the Quincy schools. These were mainly for gifts and, again, flowers were the primary motif.

She also enjoyed [professional] basketball games. “She wouldn’t miss a Celtics game on television. It seemed strange that a small woman like her took to basketball, but she loved it,” her son said. …He sometimes called his mother from Atlanta when the Celtics were playing the Hawks to tease her about her team “now being in trouble.” Her response would be, “Not my Celtics!”

Another son recalled his mother’s role at peacemaker. “When a disagreement came up, she would be the one to slow it down and suggest taking another look at things.” He described her as a very positive person who always find a good side. “She was always concerned for other people.”

Our family agreed that she would be pleased with Mr. Sullivan’s article, but she’d wonder what all the fuss was about!

Imagine our surprise about a month later when we found an article about our mother in the Boston Herald – There’s Joy Too in the Ordinary by Beverly Beckham! Ms. Beckham, currently with the Boston Globe, has graciously given me permission to quote from it…

The clipping has been hanging on the wall above my desk, cut from the paper a month ago, an obituary of a woman I didn’t know.

I haven’t always read obituaries. Before my mother died I only skimmed them, turning the pages quickly, the way I hurry down a dark street when it’s late at night and I’m alone. …Now I not only read the obituaries, I study them. Every name is a life. Every life was important to someone. A few paragraphs at the end of that life isn’t much, so I read each with care.

“Althea Johnson took pride in being a homemaker,” caught me by surprise. The simple words “pride” and “homemaker” made me care about this woman because they brought to mind all the women I used to know who took pride in homes, women who marked their accomplishments not in dollars and cents, but in windows so clean they seemed invisible; in starched white shirts and laundered sheets; in children with scrubbed faces and shiny hair; in furniture that gleamed; in a house that sparkled; in a table set with linen; in knitted sweaters and crocheted scarves; in homes fragrant with home-baked cookies; in all the things women used to do.

…Mrs. Johnson was just an ordinary woman doing ordinary things. But that’s exactly why I’ve been mulling over her obituary for a month. You see, I am used to “founder,” “inventor,” “doctor,” “actor,” “was an innovator,” an “educator,” “formed company.” These are the typical headlines. Ordinary people don’t get written up. Braiding rugs and tending gardens are not the things for which people are lauded.

…The point of all this? It isn’t that we value accomplishments that should not be valued. …It’s just that hooking a rug, caring for a garden, knitting a sweater, cooking a meal, filling an empty space with beauty, making a house a home and making a home a comfortable place are achievements, too.

Althea Johnson took pride in being a homemaker, as all homemakers should, because there is pride to be taken in doing any job well.

My mother never did think of herself as extraordinary, but in my eyes she was because she was my mother! She was the glue that held our family together. For as far back as I can remember, my dad held down a full-time job at the local shipyard; came home for a hurried dinner and then would go off to carpentry jobs he’d lined up on the side. Mother was there to keep things moving along – doing all the things mothers did in those days. 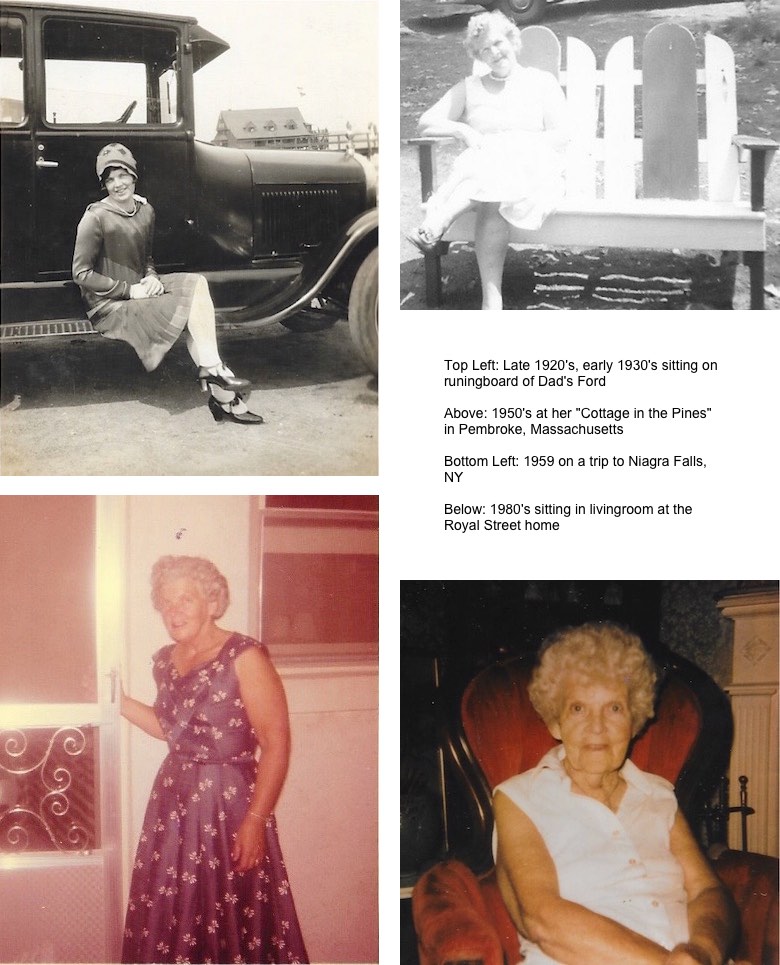 I recently discovered the poem Ordinary Day by Barbara Crooker in which she describes the day in the life of a stay-at-home mother. It begins with the line This was a day when nothing happened, but as you read through it you get the sense she took pleasure in everything that did happen – a very happy and contented person! That was my mother, who looked upon every day as a day of grace!

This was a day when nothing happened,
the children went off to school
without a murmur, remembering
their books, lunches, gloves.
All morning, the baby and I built block stacks
in the squares of light on the floor.
And lunch blended into naptime,
I cleaned out kitchen cupboards,
one of those jobs that never gets done,
then sat in a circle of sunlight
and drank ginger tea,
watched the birds at the feeder
jostle over lunch’s little scraps.
A pheasant strutted from the hedgerow,
preened and flashed his jeweled head.
Now a chicken roasts in the pan,
and the children return,
the murmur of their stories dappling the air.
I peel carrots and potatoes without paring my thumb.
We listen together for your wheels on the drive.
Grace before bread.
And at the table, actual conversation,
no bickering or pokes.
And then, the drift into homework.
The baby goes to his cars, drives them
along the sofa’s ridges and hills.
Leaning by the counter, we steal a long slow kiss,
tasting of coffee and cream.
The chicken’s diminished to skin & skeleton,
the moon to a comma, a sliver of white,
but this has been a day of grace
in the dead of winter,
the hard cold knuckle of the year,
a day that unwrapped itself
like an unexpected gift,
and the stars turn on,
order themselves
into the winter night.

To read the full Barbara Beckham article, There’s Joy Too in the Ordinary, click here.