A Succession of Moments

I left Massachusetts to “seek my fortune” before my twentieth birthday. Over the next fifty years I returned for short visits – to be married; to have the kids baptized; to attend funerals; to visit family – never staying more than a week or so. My last visit was to put Joanna to rest beside her Mom and Dad in a cemetery on a hillside in Charlton.

In the early 1970’s I first saw the boldly painted gas storage tank as I traveled from the Boston airport through Dorchester to my boyhood home on the south shore. 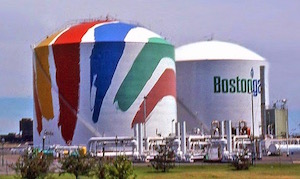 I learned later that the Boston Gas Company had commissioned Corita Kent (1918-1986), a pop artist and former nun, to create a piece of art to brighten up the otherwise drab tanks. The rainbow swash painting she created greatly brightened the commute for many Bostonians. However, it was not without controversy. The US was at war in Vietnam. Some believed the blue swash resembled the profile of the North Vietnamese Leader Ho Chi Minh and was intentionally designed as a public protest. She was a promoter of peace in the world, but denied that a profile was embedded in the rainbow. The original painted tank was demolished in 1992. The rainbow swash was replicated on its twin tank and remains a Boston landmark.

Fast forward to Sunday, April 3, 2016. If I’m at home on Sundays, I make it a point to watch and/or set the DVR for CBS’s Sunday Morning. It’s a great mix of short topical pieces – always interesting. This morning they had my undivided attention when I heard the words: It may just be the most famous gas tank in the world. That might not sound like much, but the “Rainbow Swash,” as it’s called, off Route 93 in Boston, is also one of the largest copyrighted works of art in the world. The segment, Corita Kent: An Overshadowed Pop Art Icon, went on to talk about her relative obscurity compared to some of her male pop art contemporaries and described the exhibit of Corita’s work at the San Antonio Museum of Art.

I commenced a Google search to learn more about this woman whose art I passed on each return to my boyhood home. In my search, I came across this poster based on a serigraph (a silk screened image) she did in 1979. I was struck by her words: life is a succession of moments; to live each one is a way of succeeding. 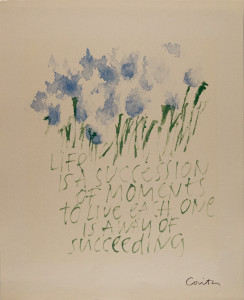 Certainly not all of the moments in my life were accompanied by travel back to Massachusetts and seeing that rainbow swatch, although some significant moments were.

Joanna truly loved the spoken and written word. Whenever she read or heard something that touched her, she’d either clip it out of the paper/magazine or jot it down before she forgot it. She clipped an article from the Tampa Tribune shortly after the death of Britain’s Queen Mum. The reader was asking for a reprint of the poem, “She Is Gone”, read at the royal funeral.

I like to think Joanna left that sentiment behind for me to use as a guidepost. She was saying: yes, go ahead and grieve; cherish the memories, but please get on with life! Smile, open your eyes, love and go on!

Taking Corita Kent’s words to heart, even though some of the moments have been incredibly sad, I believe I am succeeding!

← Death Valley: The (Not So) Barren Beauty
Yosemite! →
Home Page