John Muir, one of the earliest advocates of the national park idea and its most eloquent spokesman, said of Yosemite: “It is by far the grandest of all the special temples of nature I was ever permitted to enter.”

I found James Kaiser’s Yosemite, The Complete Guide very helpful in learning about this National Park. In the months leading up to my trip, I read and re-read this guidebook, marvelling at the photography.

Early June 2016 turned out to be the perfect time to visit. Excellent weather – cool, clear mornings (40’s/50’s) and comfortable afternoons (mid 70’s/low 80’s); no humidity! Lots of people/cars, but nowhere near what it would be a few short weeks later during peak tourist season. Best of all, there had been “normal” snowfall during the winter (unlike the drought of recent years), resulting in rapidly running rivers and full action from the park’s many waterfalls – something that would disappear in a matter of weeks!

The park was absolutely stunning! Kaiser did a great job preparing me – but I was still blown away by the beauty I found there!

I should probably stop here and mention that recently there was a change in vendors providing hospitality services for the park. The outgoing vendor claimed ownership of the historic names for some of the venues – hence the name changes. Most of the old-timers are aghast at the changes – for me, the newbie, I wasn’t bothered so much!

……After lunch, under the direction of a Park Ranger, we toured the Pioneer Yosemite History Center located across a covered bridge over the Merced River. It’s a cluster of buildings relocated from other parts of the park, representing early life in the area. After the Ranger’s history lesson, we headed off to take in the major attractions of the park.

I was not prepared for the scenery that awaited us as we exited the Wawona Tunnel! At the top of this page is one of the many photos I snapped at the Tunnel View observation area. In that photo, from left-to-right: El Capitan; Half Dome; the Three Brothers Peaks and Bridalveil Falls spilling into the valley below. What a great park overview!

Over the next several days we were guided through the park by David Lukas, a professional naturalist and writer for almost 30 years. We walked; hiked; rode our bus; and hopped on/off the park’s shuttle to see as much of this jewel as we could in the 4+ days we had.

We stayed in the Park at the Yosemite Valley Lodge, formerly Yosemite Lodge at the Falls to you purists! This proved to be perfectly located, providing easy access for us to venture out during our free/unplanned time.

Among the Park’s many waterfalls, I found Yosemite Falls to be the most spectacular. It’s a giant 2,425-foot, three-tiered monster. Couldn’t get enough of it! 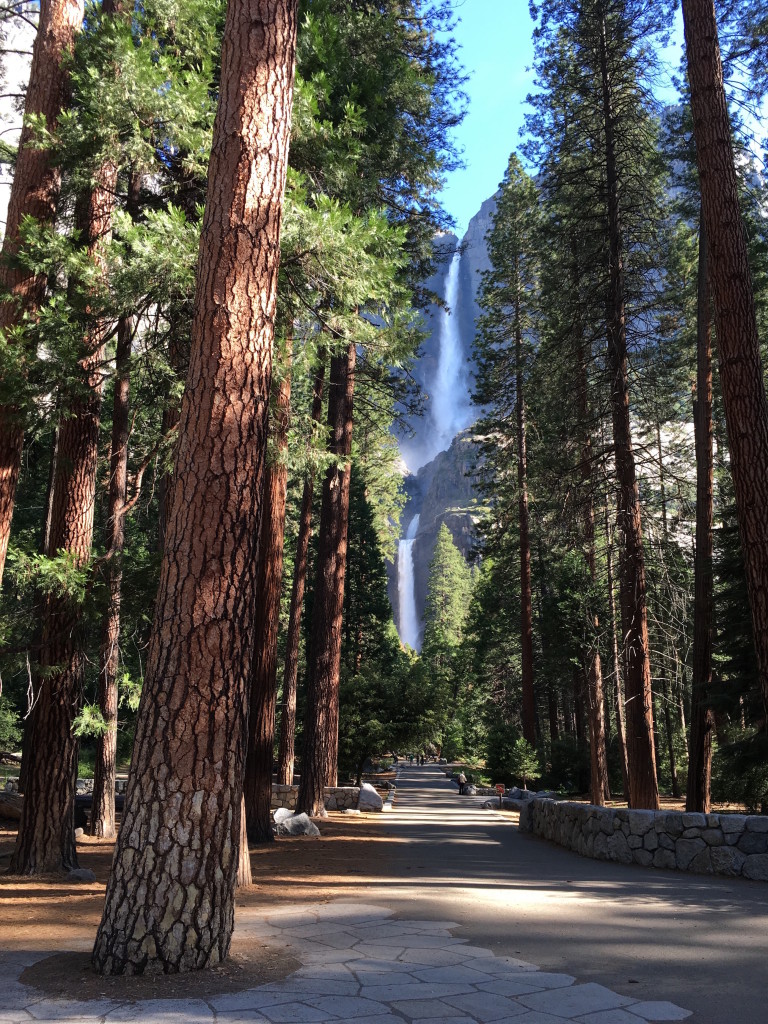 This is the view I had of Yosemite Falls from the patio of my room at the Lodge. Quite a sight to wake up to every morning! 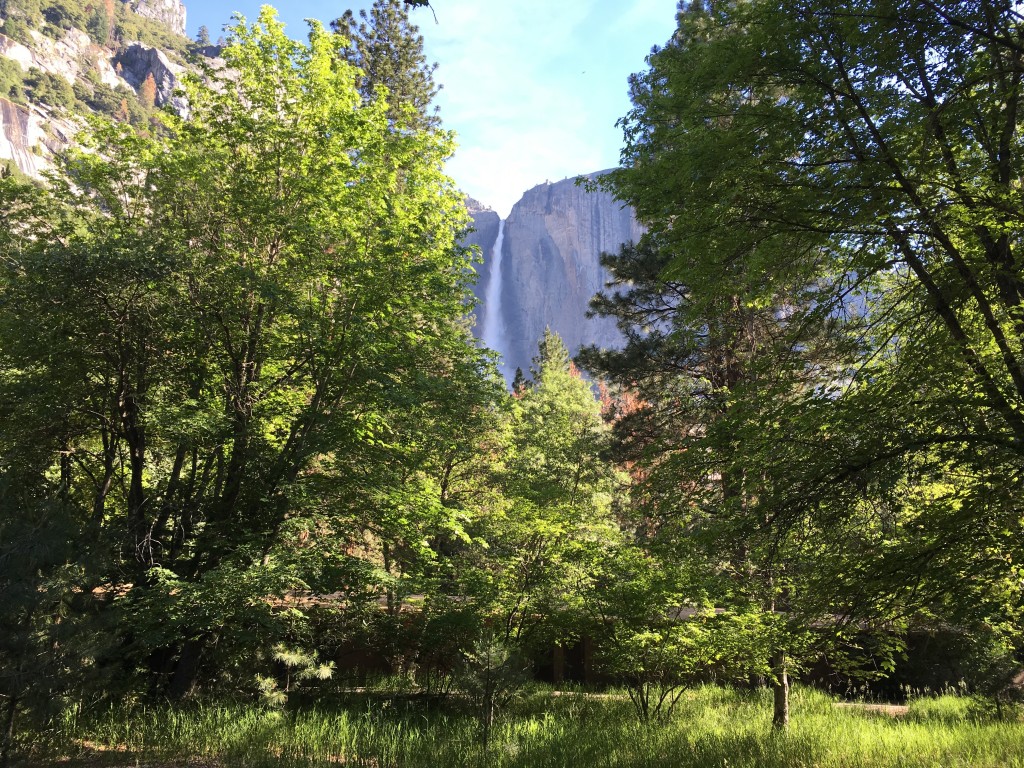 As a group, we walked a path that took us to a wooden bridge at the the base of the lower segment. The falling water sprayed and cooled us as we passed over the bridge – actually had to hold onto my hat, as the falling water kicked up a bit of a breeze! 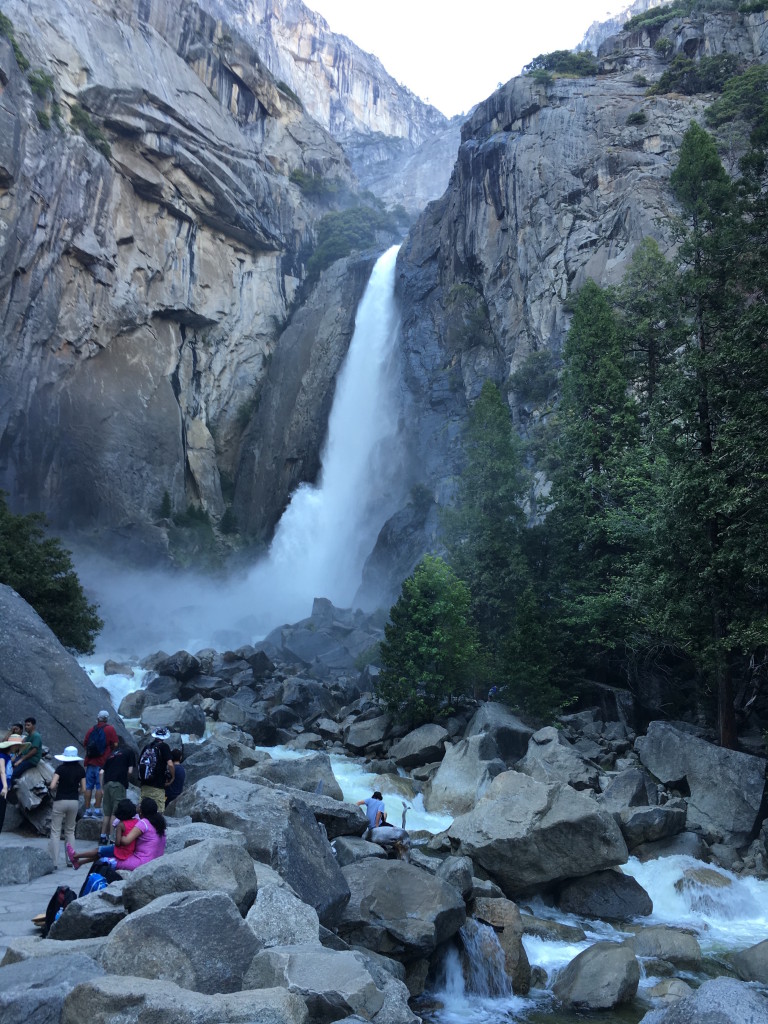 Since it was literally “in my backyard”, I visited again several times. Early one morning after breakfast, I found an artist painting the scene on a piece of wood. He thanked me for asking as he gave me permission to take a photo – I guess others just snapped away without asking! 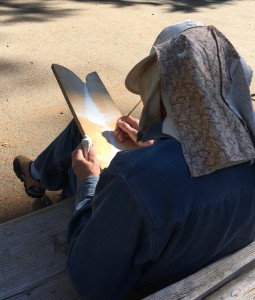 El Capitan, an imposing granite monolith, rises over 3500 feet from the valley floor. It’s one of the park’s most iconic features and, for mountaineers, one of the most celebrated climbs in the world. 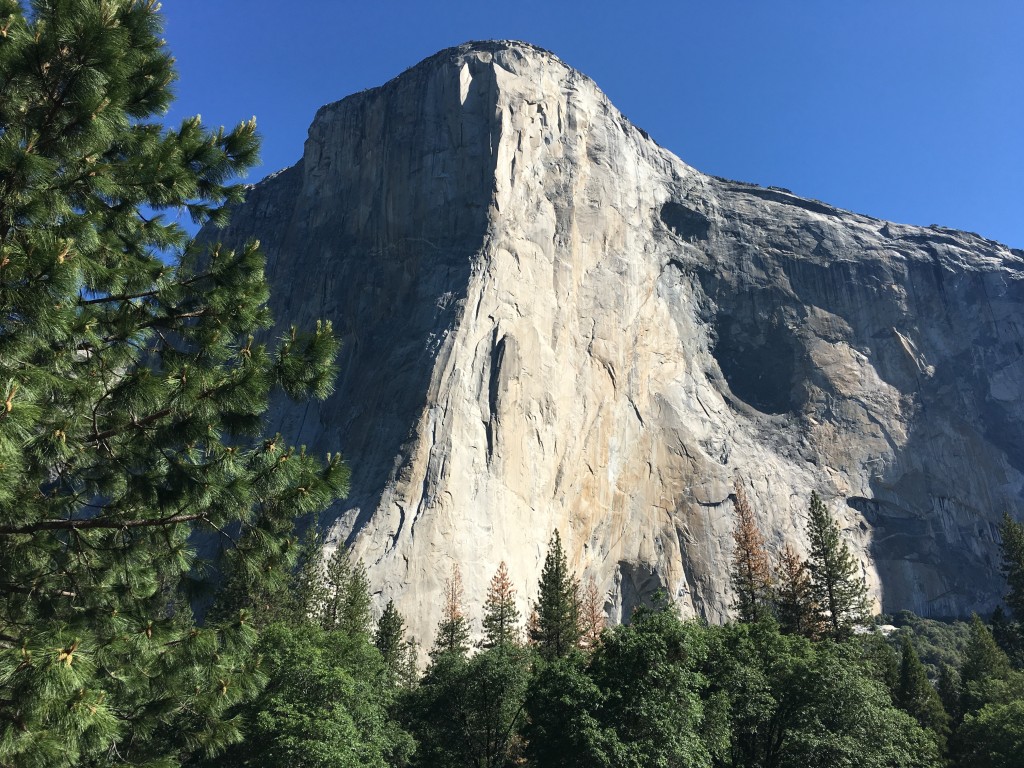 “The Nose” is the dividing line between the southwest face (in the shade on the left) and southeast (in the sun on the right). This was the route Warren Harding and two friends pioneered as the first climbers to conquer El Capitan in 1958. It took them 45 days spread over 18 months to do it. Today it’s not uncommon for “speed climbers” to reach the top in a matter of just a few hours!

David, our guide, came equipped with a powerful tripod-mounted scope. From where we stood in the El Capitan Meadow, he trained his scope on the cliff’s face so we could see the athletes making their way to the top. Once I spotted a climber in the scope, I was able to zoom in with my trusty iPhone and take the photo below. I’ve added the blue “magnifying glass” to pinpoint his/her location.

Half Dome can be seen from several points in the park, here from Olmstead Point… 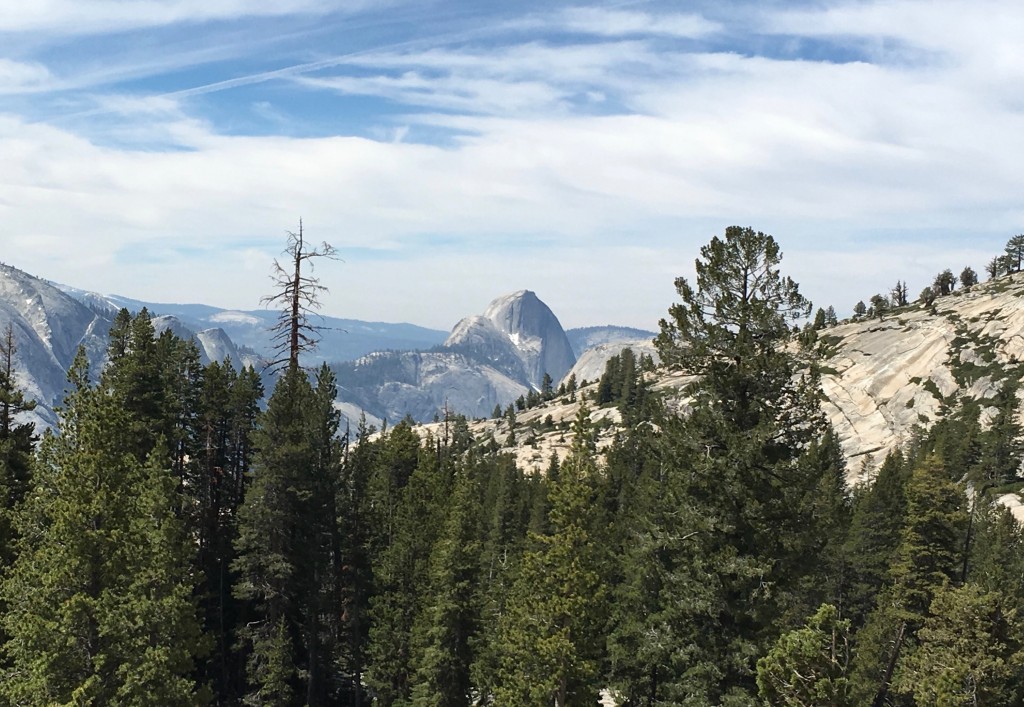 …and here at Glacier Point. 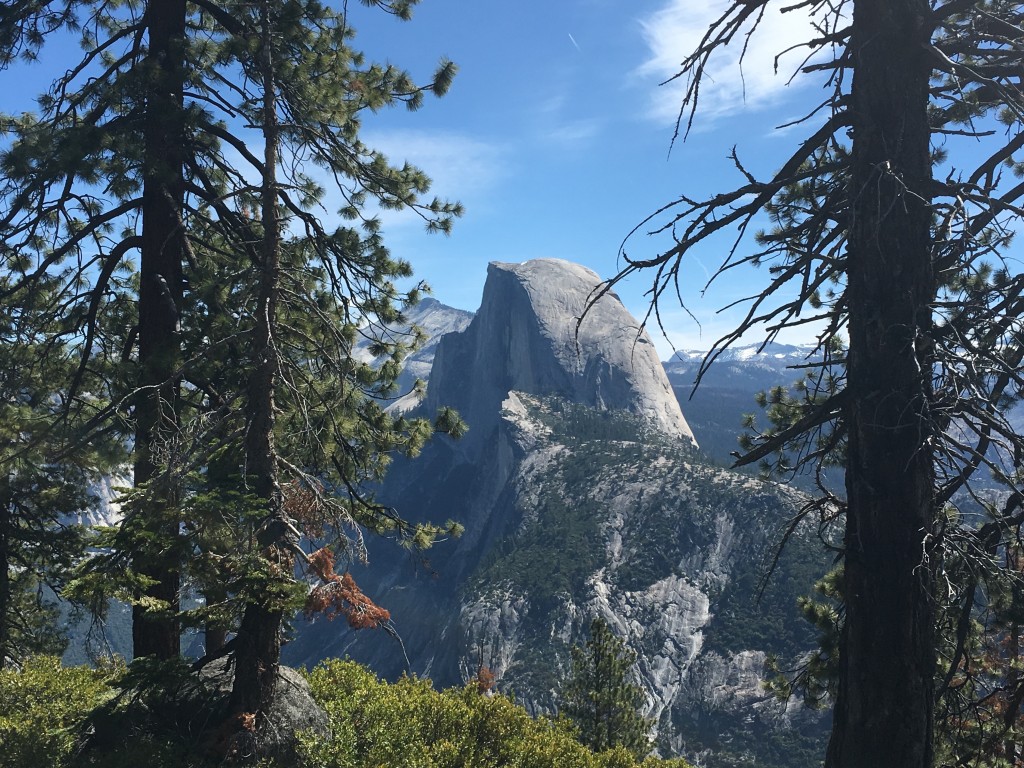 One afternoon our group made the easy .25 mile walk to Happy Isles, a pair of islands in the Merced River at the east end of Yosemite Valley – a tranquil, uncrowded and “happy place”! The rapids were pretty intense here, compared to the relative calm river in the the B&W photo above.

We saw the famous Tuolumne Meadows, one of the largest high-elevation meadows in the Sierra Nevada; we stood in El Capitan Meadow and admired the granite giant, but this small meadow tucked away at Crane Flat seemed to me to epitomize the bucolic nature of the Park. This part of the Park is known for its high bear population – so we were on the lookout!  Whenever a bear is killed in the Park (usually during a run-in with an automobile), a sign is erected along the roadside as a memorial to that lost life. Ironically, as I write this, Florida is considering having a “Bear Kill” season again this year, after 2015’s “successful” hunting season that took the lives of 298 bears! 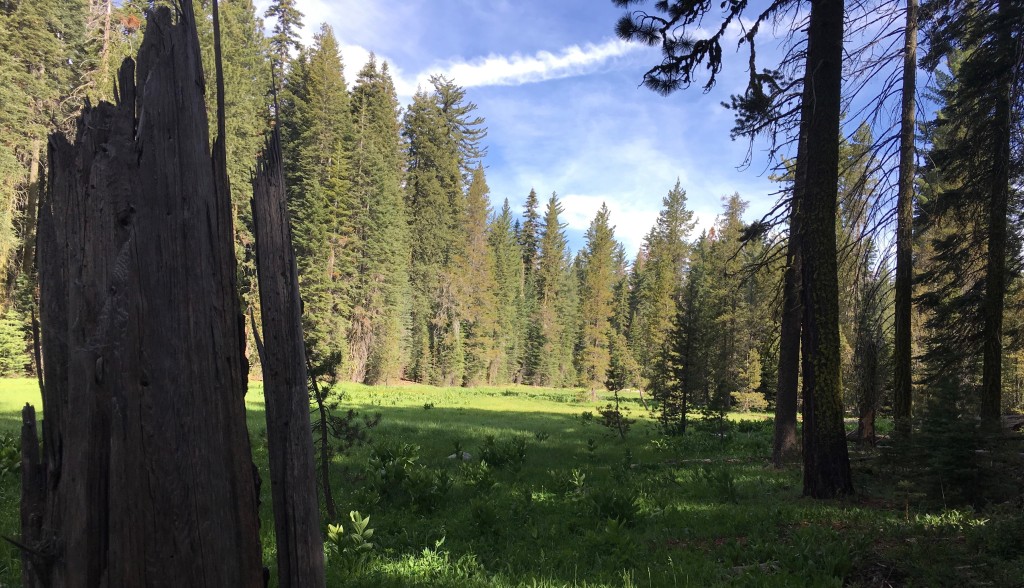 In this shot, from Glacier Point, at left center is Liberty Cap (the granite dome); then Nevada Falls to its right and Vernal Falls lower center. Snow can be seen on Mt. Florence and Mt. Clark in the background.

One afternoon I hiked the .8 mile paved trail to a foot bridge to get a closer look at Vernal Falls. Although under one mile, this was the most difficult hiking I encountered during my stay. It was uphill all the way – but worth every drop of sweat to enjoy this view of the falls! I elected not to make the additional climb up a steep .5 mile granite stairway of over 600 steps to reach the top of the falls. For one thing, I was exhausted; secondly, I have a mild(?) fear of heights and the guidebooks indicated this part of the trail can be a bit treacherous.

The walk to Mirror Lake was an easy 2 mile round-trip on a paved road, with a slight elevation. I’d seen some stunning photography of the beautiful reflections in the lake of the surrounding cliffs – hence the name of the lake. But, Tenaya Creek was moving swiftly that day so the lake wasn’t smooth enough to “mirror the cliffs”. Although, I was pleased with this shot of Mount Watkins. 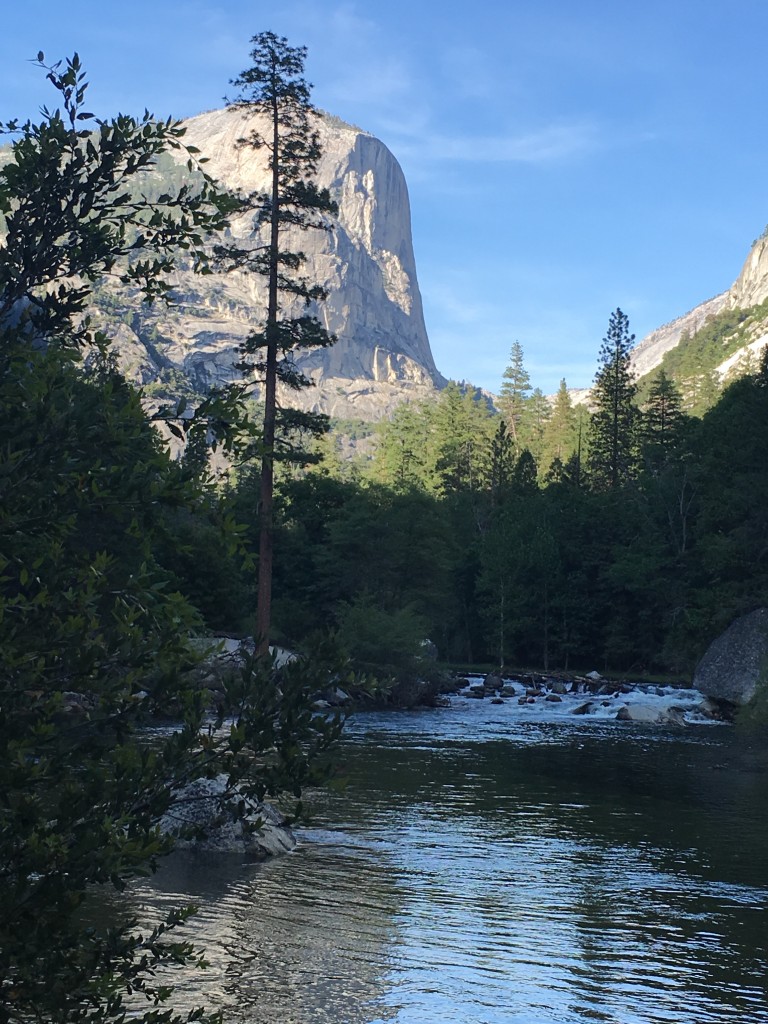 From Glacier Point, a view of Yosemite Valley. It seemed surreal to be looking down 4,000 feet at the valley floor.

A visit Yosemite National Park wouldn’t be complete without stopping at the Majestic Yosemite Hotel (that name change thing again: formerly, the Historic Ahwahnee Hotel). Construction began on the hotel in August 1925; the grand opening was held in July 1927. It was built of concrete and steel, with granite accents, to make it resistant to fire, which destroyed so many of the great hotels of that day. The exposed steel beams are camouflaged to make them look like giant wooden logs. We had a nice lunch in the dining room. Some of our group returned for an evening meal and I know of one person who returned to have an afternoon glass of champagne on the patio overlooking the meadow! 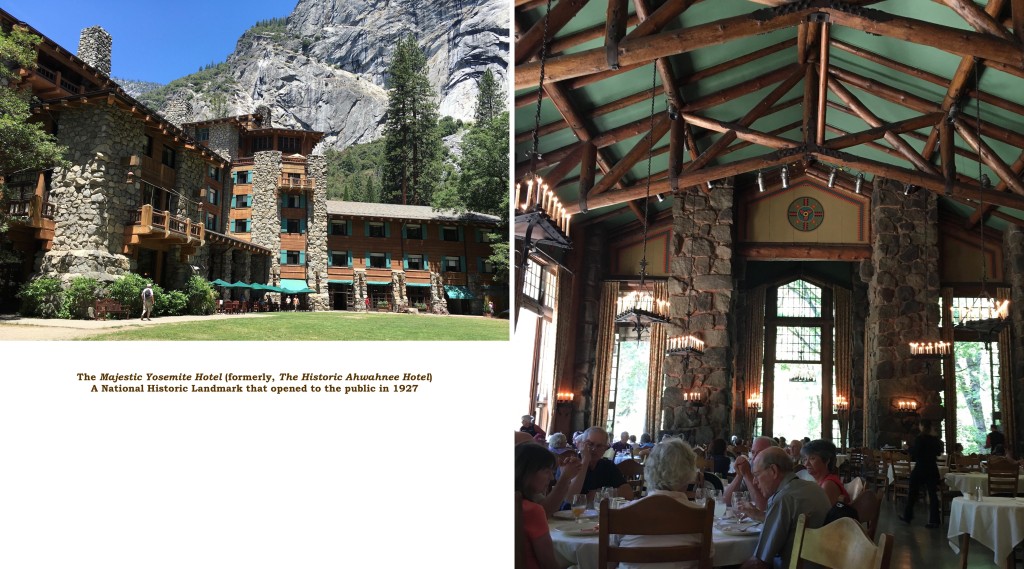 Didn’t spot any black bears, bighorn sheep, mountain lions or coyote – but did see numerous mule deer. I caught this one eating leaves/berries from a bush at Mirror Lake.

This one was grazing at a busy intersection in the valley, paying no mind to the passing traffic!

Having lived most of my life east of the Rockies, I’d never seen the Steller’s Jay, which is native to western North America. Really vibrant colors and related to the Blue Jay that I’m more familiar with. These guys were all over the place!

Sitting on a bench at the base of Yosemite Falls, eating some trail mix, I was joined by this Belding’s ground squirrel who wanted his share. 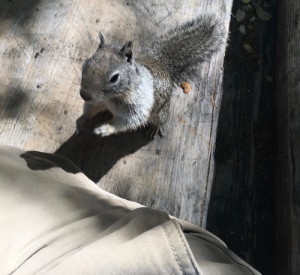 It was wonderful to share this experience with a great group of like-minded individuals – with ample time for individual exploration. As has been my experience with recent group travel, although I’ve met and mingled with a large group, I’ve come away having more of a connection with one or two. This trip was no exception. My seatmate for much of the week was a fascinating person from the northwest. Never lacking for conversation, we told stories of our kids & grandkids; I learned about orchestras, violas & birds; we shared how it is to move on after losing a spouse; or we just sat admiring the scenery as we rolled down the road. One evening after dinner and a presentation by Frank Helling, a John Muir reenactor, she and I joined 50 or so other strangers in a field to gaze into the starry night’s sky and listen to stories told by a young park employee. A great way to end the day!

Theodore Roosevelt, after camping in Yosemite National Park wrote: “It was like lying in a great solemn cathedral, far vaster and more beautiful than any built by the hand of man.”

In the quote at the top of the page, Muir describes Yosemite as a “temple of nature“; here, Roosevelt describes it as a “solemn cathedral“. No coincidence. I can truly say it gave me a strong spiritual feeling to be there in that place. 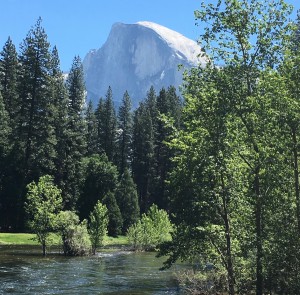 ← A Succession of Moments
A Pacific Northwest Adventure →
Home Page