Cutting the Cord on Cable TV

The cable bill seemed to growing faster than my grandchildren – and those young folks grow up fast! I moved to a new apartment this fall and as part of my monthly lease was a $30 charge for data/internet access in my unit. If I wanted TV service, I’d have to buy it from the apartment’s sole provider: Directv.

I’d been thinking about “cutting the cord” for sometime, and this relocation provided the impetus for that big step. Here I’ll explain my thought process and the steps I took to free myself of the cable company. As an offshoot, I’ve saved $158/mo in expenses! I did spend a fair amount of money on equipment, which I’ll recoup in about 6 months of those monthly savings.

Before we get too far into this, let me lay out of few terms and definitions

I also had Netflix and Hulu subscriptions. My Amazon Prime account also offers a ton of free movies.

To get Netflix and Hulu I had one Roku streaming device that I used on my main TV and an AppleTV that was with my bedroom TV. I’d have to buy another of each, so both TVs could have both boxes – the major reasons being the AppleTV doesn’t allow streaming of Amazon offerings and I can get photos and iTunes on the AppleTV, but not the Roku.

What I Required & Could Give Up

If I was going to jettison cable/satellite TV, I wanted as many of the local channels as I could get (NBC, ABC, CBS, FOX, PBS). I also needed the station that carried Rays baseball and Lightning hockey (FOX/Sun Sports). HBO & Showtime were an absolute must. I could give up the seldom-watched “premium”  Starz, Cinemax & The Movie Channel. I had to have at least one of the 24-hour news channels (preferably CNN). USA, AMC, History Channel, and an assortment of lessers would certainly be nice.

I’ve been one the holdouts, not wanting to give up my “home phone”. This was the perfect time to get rid of that and go “mobile-only”.

There are several web sites dedicated to this subject.

Putting the New System Together

This spreadsheet shows my before and after costs. Equipment could have been $100 less if I’d purchased the 2-tuner Tablo instead of the 4-tuner. I have a 5TB USB disk drive; could have saved $50 with a 2TB. On the monthly expense side, I decided spending $4/mo extra for Hulu to enjoy commercial free viewing was a no-brainer. The $30/mo the apartment management may be a bargain – I sense it might have been more if I had to purchase data/internet access on the market myself. 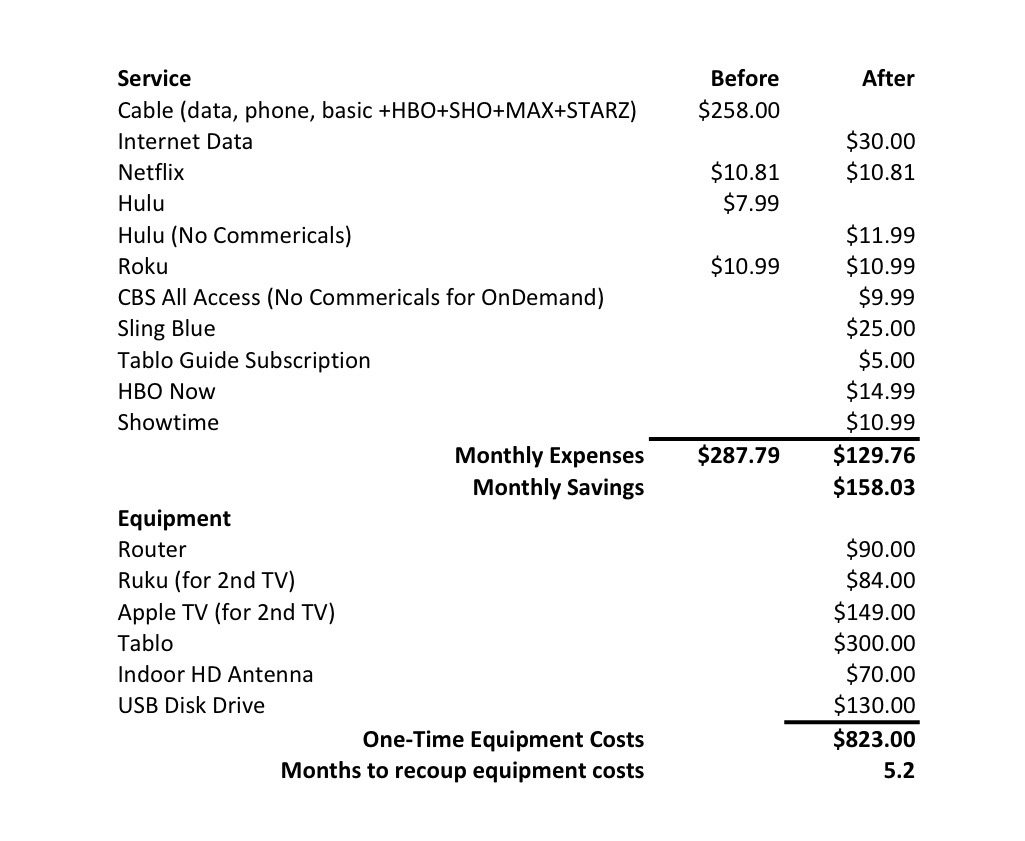 Tackling something like this is certainly not for the faint-of-heart. But anyone, with a bit of technical knowledge should be successful. Can’t lie, I really liked having the one remote to control all my TV viewing when I had cable; I still miss it. In time, I’ll get used to the multiple remotes – or maybe find one that will control everything!

That extra $158 in pocket every month makes it all worthwhile!