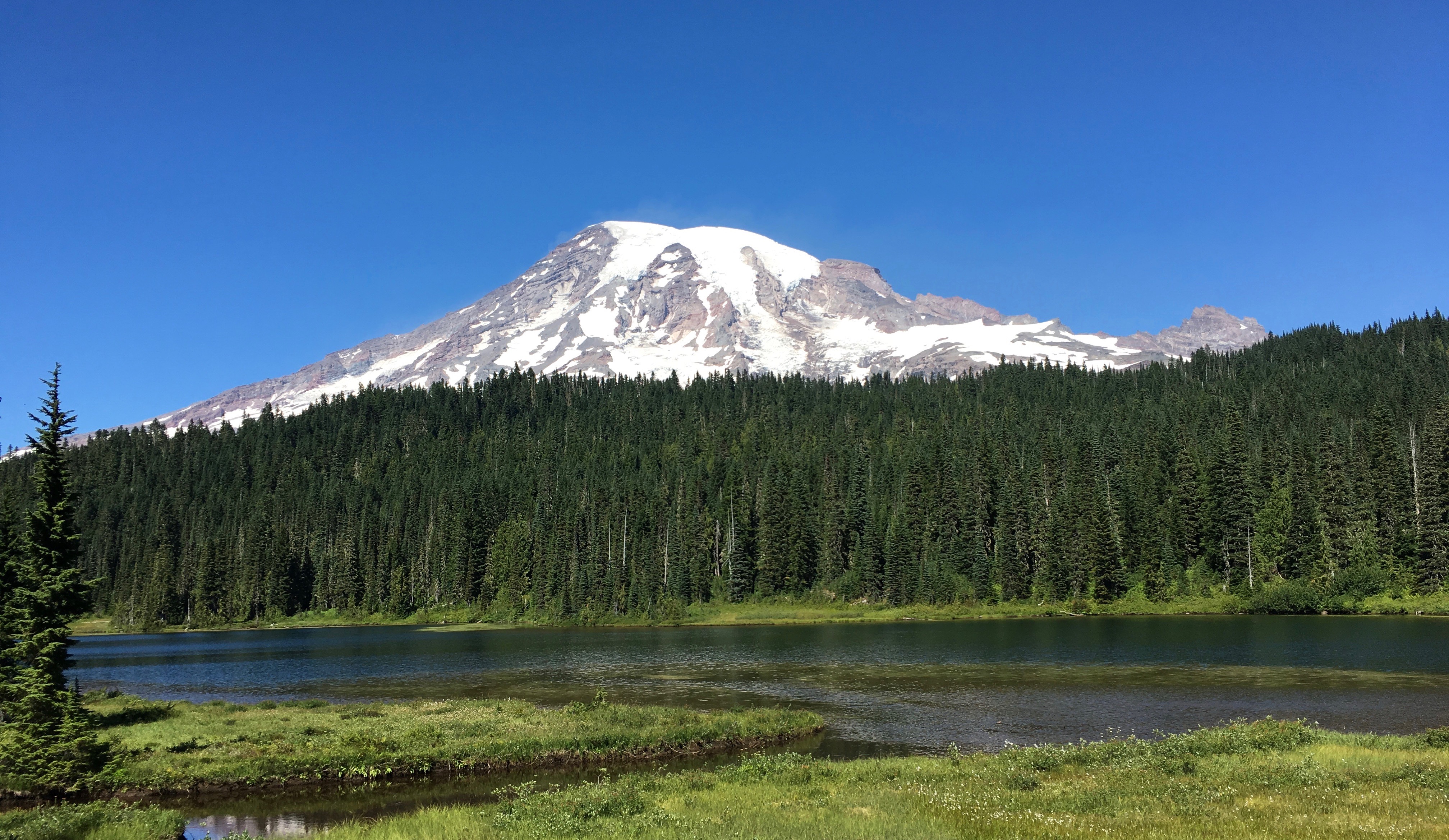 When in Washington state last year there wasn’t time to visit Mt. Rainier National Park. However, after finishing up a visit to Montana in September 2017, a quick flight from Kalispell to Seattle had me in Rainier’s backyard!

Mt. Rainier is approximately 50 miles (as the crow flies) from Seattle. Standing at 14,410 feet, this snow-capped mountain provides a spectacular backdrop for the city when there are no clouds, fog or rain obscuring the view.

In planning this little trip, I explored the option of taking a one-day commercial tour with one of the many outfits offering them from Seattle. However, I decided to make this a do-it-myself tour after finding an interesting Fodor’s article that described just what I had in mind – a weekend getaway from Seattle. It laid out a day in the park starting in the northeast, entering at White River; traversing the park and exiting near Longmire. I reserved a room at the Alpine Inn at Crystal Mtn near the White River entrance for Friday night (I’ve depicted it as the blue house on the map below); would spend Saturday roaming the park; exit late that afternoon near Longmire and had a room reserved at Alexander’s Lodge (red house on map below) for Saturday night. I’d return to Seattle on Sunday and fly back to Tampa on Monday.

Upon landing in Seattle Friday afternoon, I rented a car and headed for the Alpine Inn. 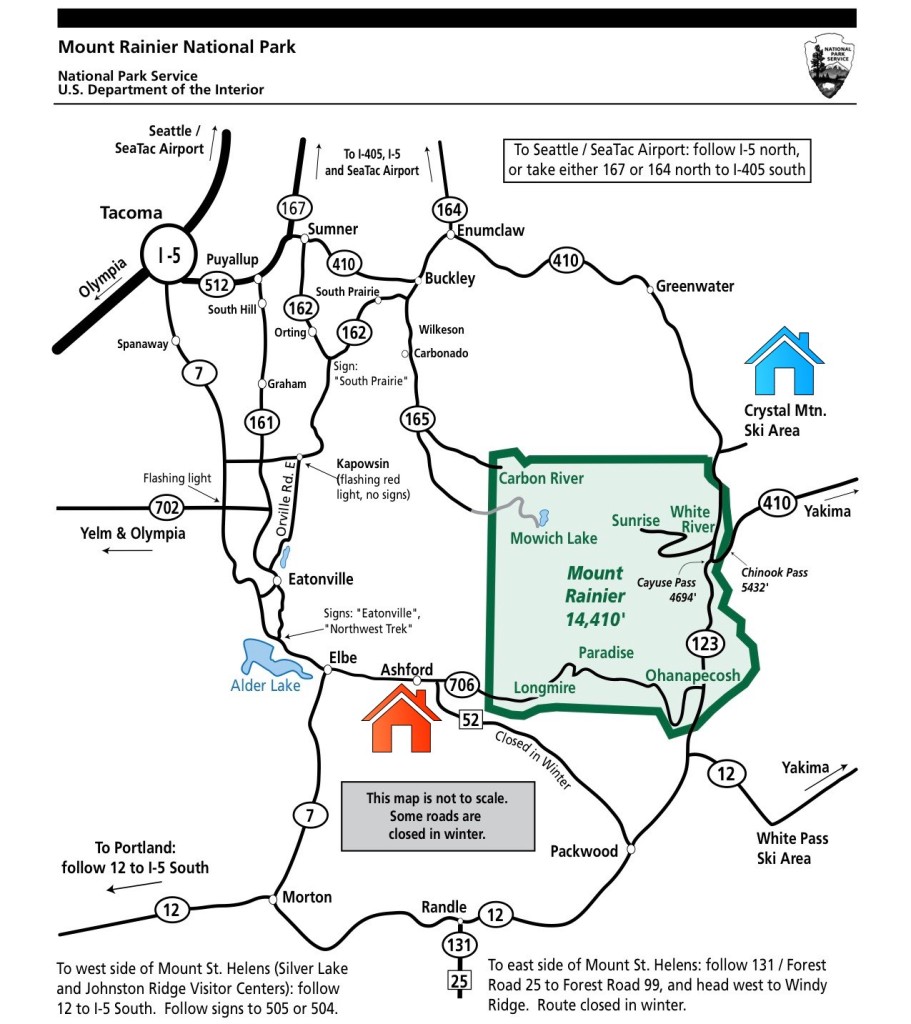 My first sighting of the mountain, other than from the plane, was on the road in Maple Valley where I loaded up on water, snacks, fruits & nuts for my time in the park the next day. 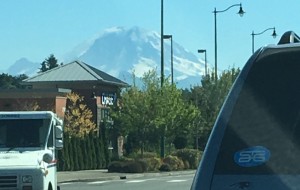 After dinner on the Inn’s outdoor terrace, I headed to bed for an early start the next morning. 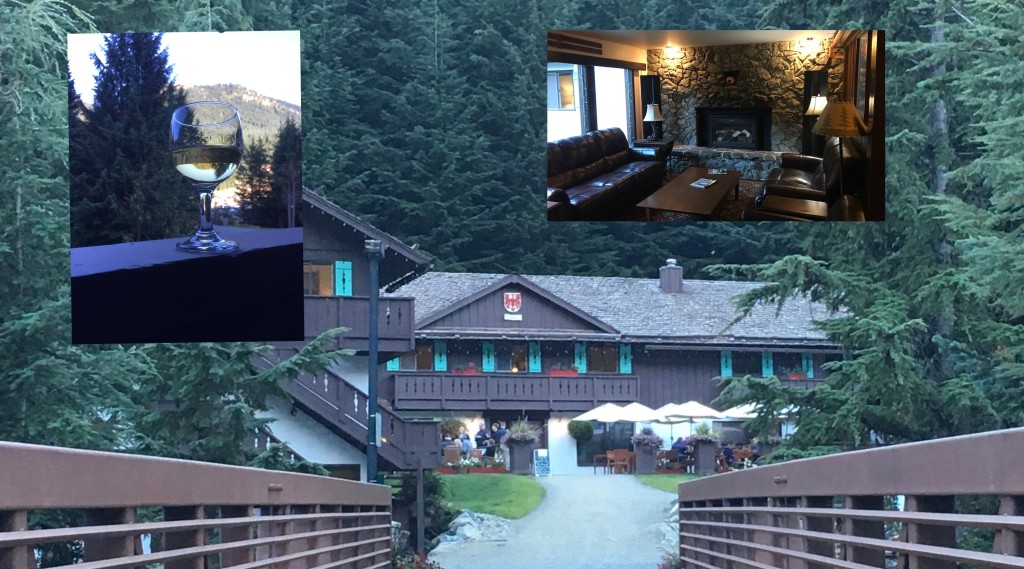 Shortly after 8:30 on Saturday morning I entered the park. Pretty much had the road to myself at that hour.

My first destination was Sunrise – highest point in the park (6,400 ft.) reachable by car. Sunrise Road is a 15-mile uphill climb of twists, turns and switchbacks providing stunning vistas – and, because of brutal winters, is only accessible from July to early October.

Sunrise Point sits on the last switchback before approaching Sunrise. From here there’s a great view of Sunrise Lake. 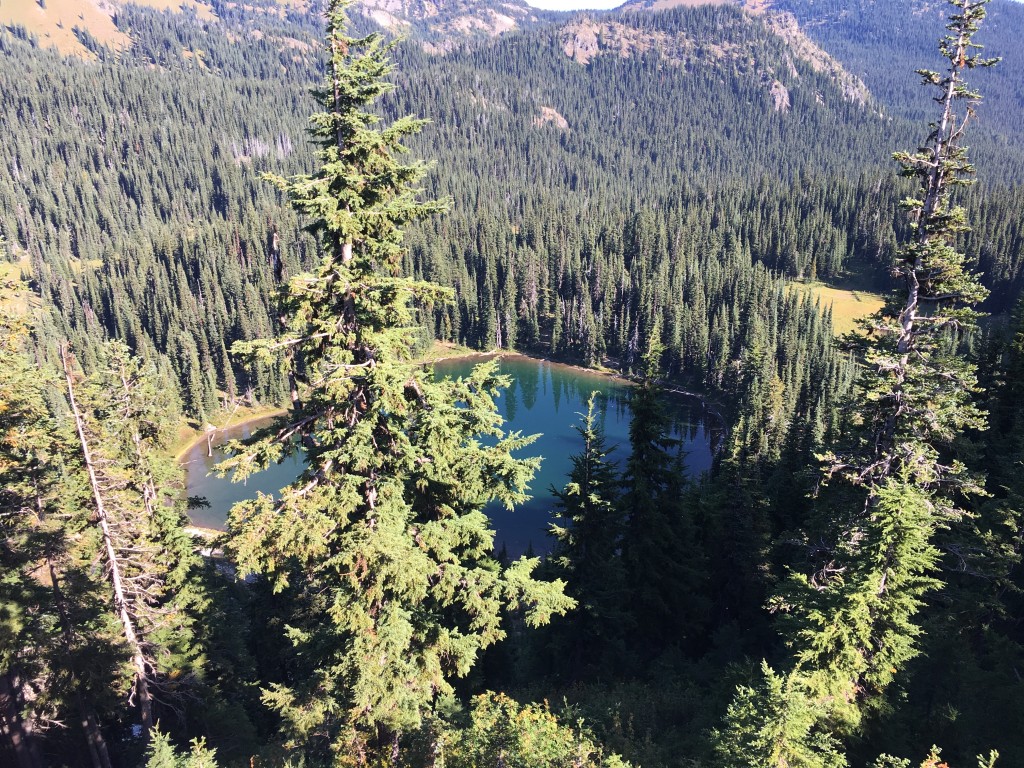 An hour after entering the park, I arrived at Sunrise.

It can be a crapshoot on what weather will greet a visitor to the park – the mountain can be shrouded in fog, clouds or rain – not today. Absolutely perfect weather!

Sunrise is in a beautiful valley which provides spectacular views of the east flank of Mt. Rainier. The open, rolling meadows with wildflowers and islands of subalpine fir and whitebark pine provide unobstructed views of the mountain and surrounding peaks and forests.

A series of trails lead from the parking area in several directions.

I took the relatively easy 1.5 mile Nature Trail loop. There was only a 300′ elevation gain from the parking lot. But starting at 6,400′, I was puffing when I reached the point where it leveled off! 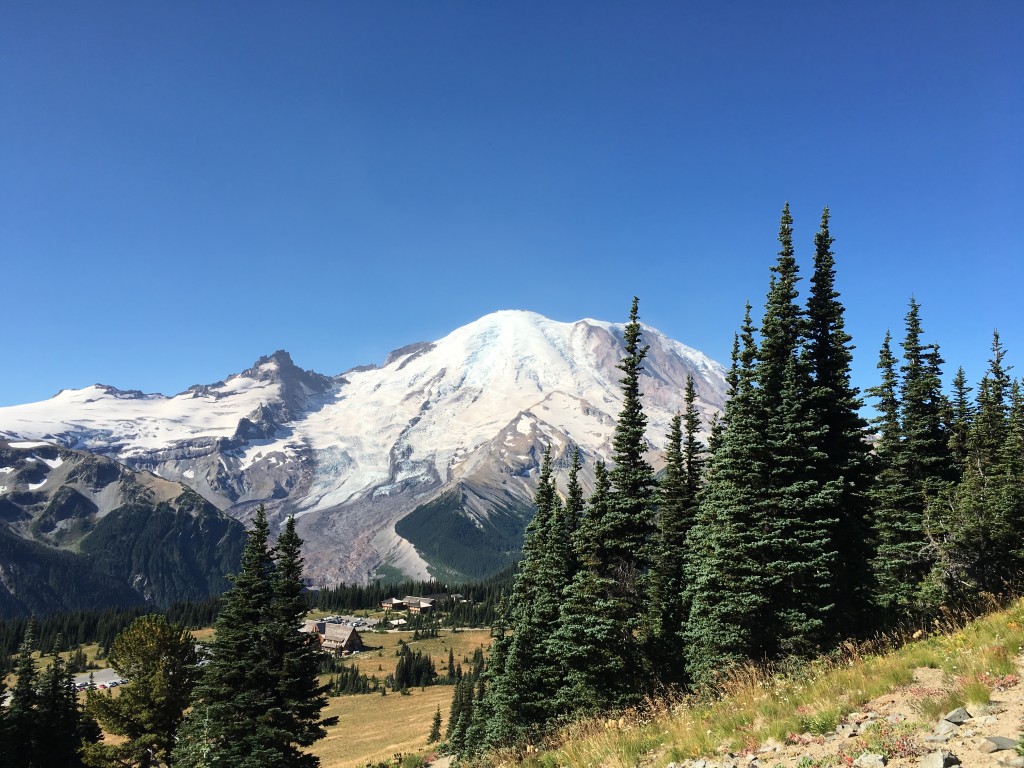 A nice view of the Sourdough Ridge from the Nature Trail. 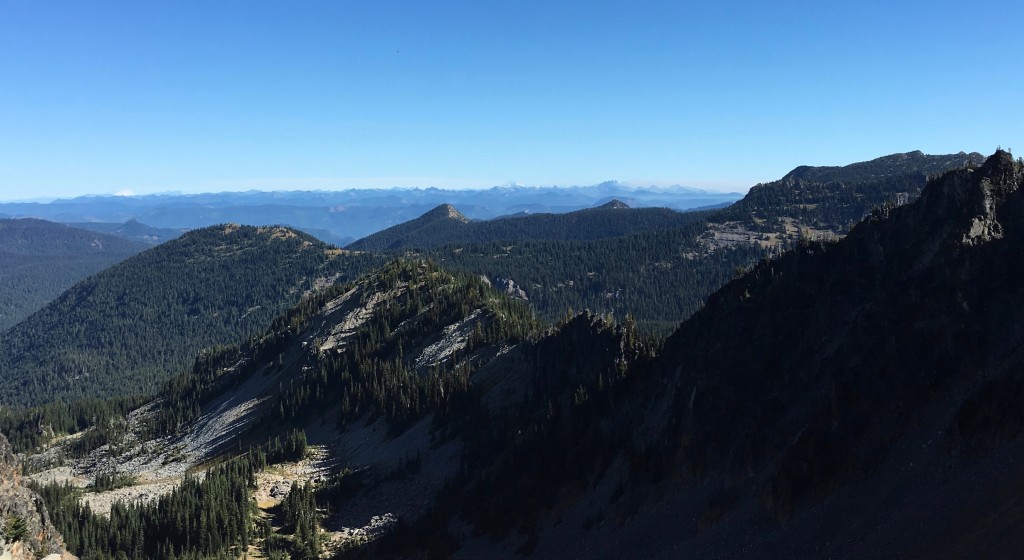 There are 27 major glaciers on Mount Rainier and numerous unnamed snow or ice patches, which cover about 35 square miles. The Emmons Glacier, clearly visible from Sunrise, is the largest in area at 4.3 square miles. As I was taking a rest break outside of the visitor center, a fellow with a telescope trained on the mountain asked if I’d like to take a look. Through it, I could see several hikers at a base camp about halfway to the summit. Very cool (no pun intended)! 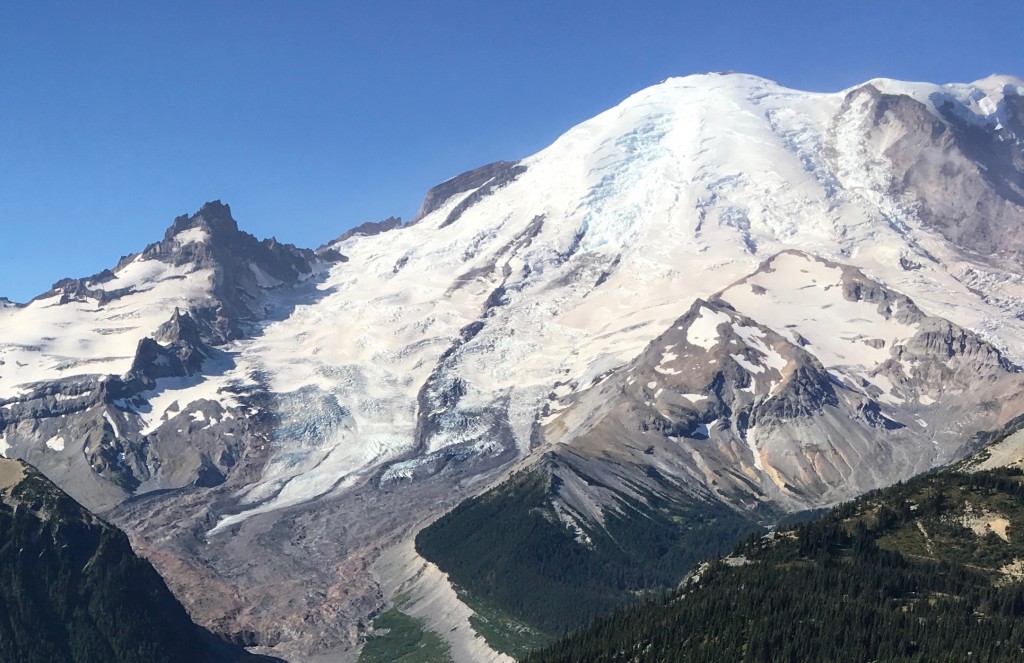 I was reluctant to leave this peaceful and tranquil place, but there was more I wanted to see before day’s end. It was back down the Sunrise road to the main road. My plan at this point was to take a side-trip out of the park to visit Chinook Pass and Tipsoo Lake, but a wildfire had that road closed. A bit disappointed, I pressed on to the Grove of the Patriarchs where another hike awaited.

I arrived here just before noon. The name of this place really tells the story: a majestic grouping of old-growth giant fir, hemlock and cedar. The easy 1.5 trail loop parallels the Ohanapecosh River before crossing a suspension bridge to a small island. The river’s waters have provided a firebreak for the trees on the island for over 1,000 years, allowing them to grow to gigantic proportions.

Moss and colorful fungi on a fallen tree. 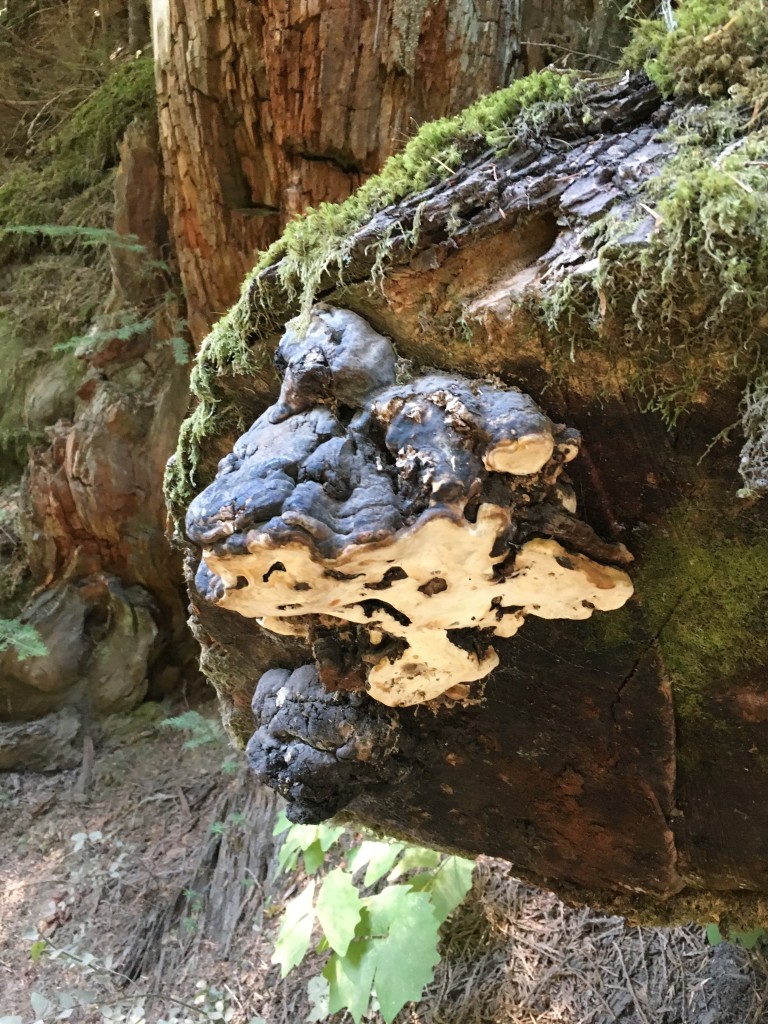 Suspension bridge over the Ohanapecosh River to the island. 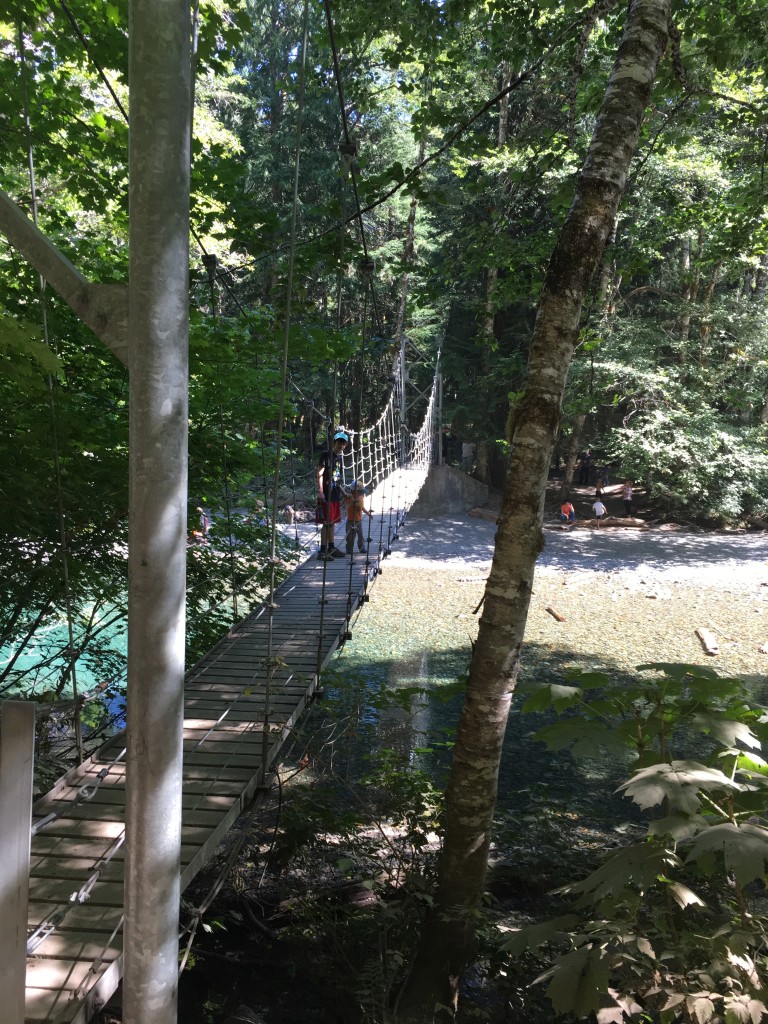 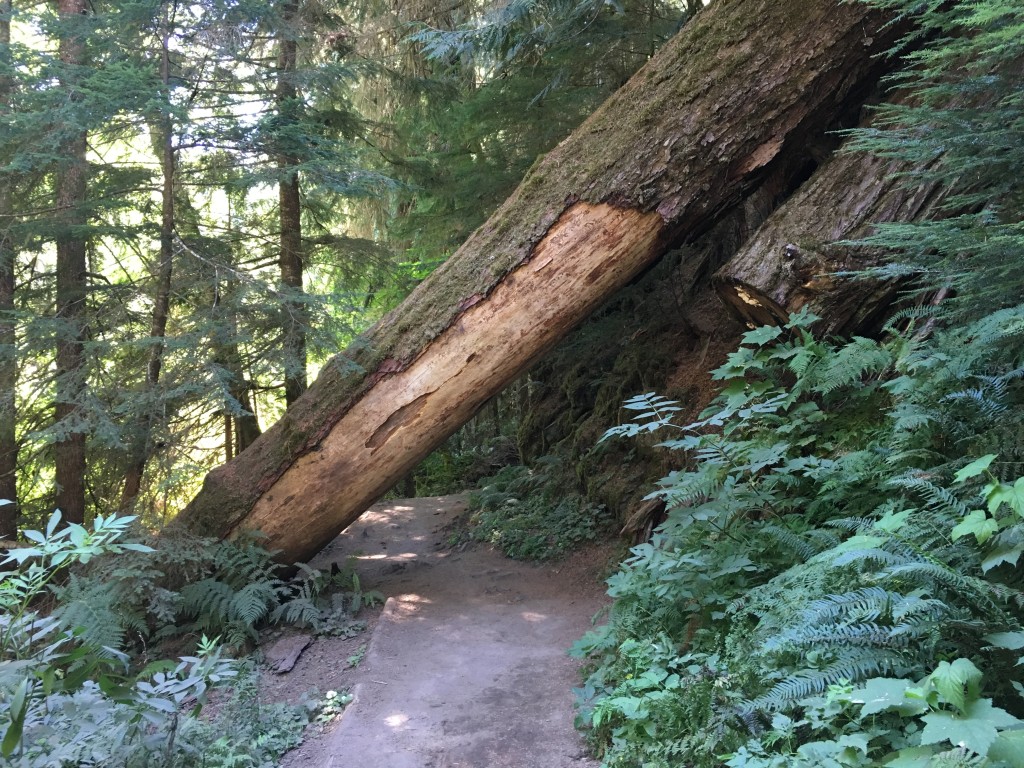 Time to move on down Stevens Canyon Road.

About half the distance between the Grove and my next major stop, Paradise, I came to this spectacular slot canyon. Box Canyon is about a half mile long; 13 feet wide and up to 180 feet deep. It was carved by the Muddy Fork of the Cowlitz River as it flowed down from Mount Rainier’s southeastern slopes over hundreds of thousands of years. I walked the easy .5 mile Box Canyon loop trail which parallels, then crosses the canyon via a wooden foot bridge. The information board at the trailhead said, in part:

“The trail not only crosses the deep river gorge but follows in a glacier’s path. Along the trail you will see evidence of the now receded glacier. Rock slabs have been ‘polished’ by sediment-rich water flowing beneath the glacier. Rocks embedded in the ice have scraped striations or scratch-marks into the bedrock.”

On Box Canyon trail, the rock slabs mentioned on the information board can be seen to the left of the trail in this photo. Also, a nice view of the mountain’s southeastern slopes. What a beautiful clear day it was! 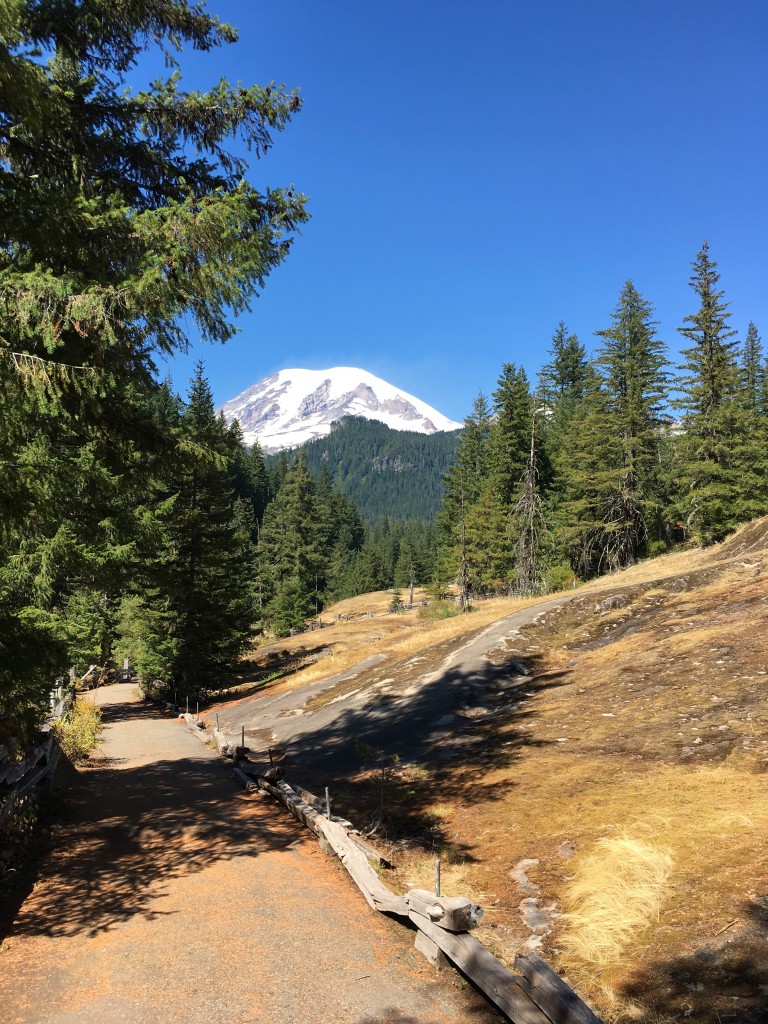 About mid-way, the trail crosses this wooden footbridge. I leaned over it to get a short video of the river rushing by 180 feet below. 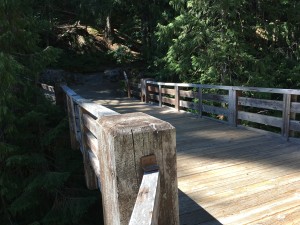 One of the many road tunnels in the park.

Along Stevens Canyon road about three miles from Paradise, I stopped to check out Reflection Lakes. Here there is one large lake and several smaller ones located next to it. They are named for the beautiful reflections of the mountain which can be seen on the surface of the lakes when the water is still and the light is right. As you can see from my photo at the top of this post, the light wasn’t quite right and water was not still – but it was still a stunning sight!

As described by the National Park Service: “Paradise is famous for its glorious views and wildflower meadows. The park’s main visitor center, the new Paradise Jackson Visitor Center, is located in the upper parking area. Paradise is also the prime winter-use area in the park, receiving on average 643 inches (53.6 feet/16.3 meters) of snow a year. Winter activities include snowshoeing, cross-country skiing and tubing. The road between Longmire and Paradise is plowed throughout the winter.“

I arrived at Paradise mid-to-late afternoon. It lies in the southwest section of the park at approximately 5,400 feet. It’s reported to be the most popular destination for visitors to the park – and that was immediately apparent to me. I had to park one mile down-slope in the picnic area and hike up to the visitor center! Once there, I mingled with an incredible mass of humanity both outside and inside of the center. A quick look at the trails, convinced me I didn’t want to spend much time at Paradise.

The southern slopes through the visitor center window. Note the crowded trail to the right. 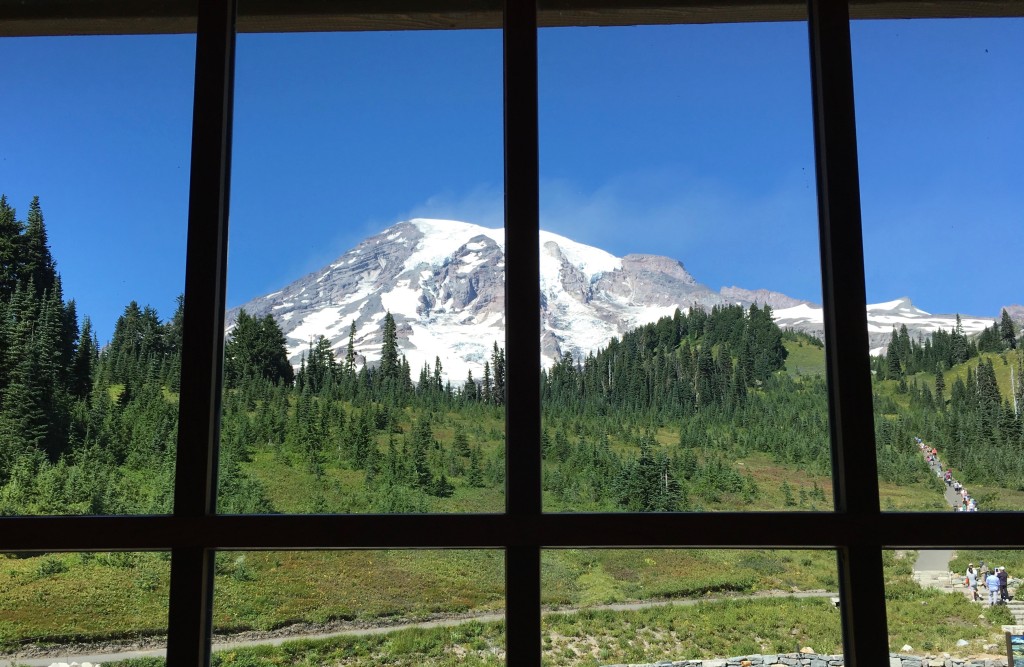 There were still plenty of wildflowers in the area. 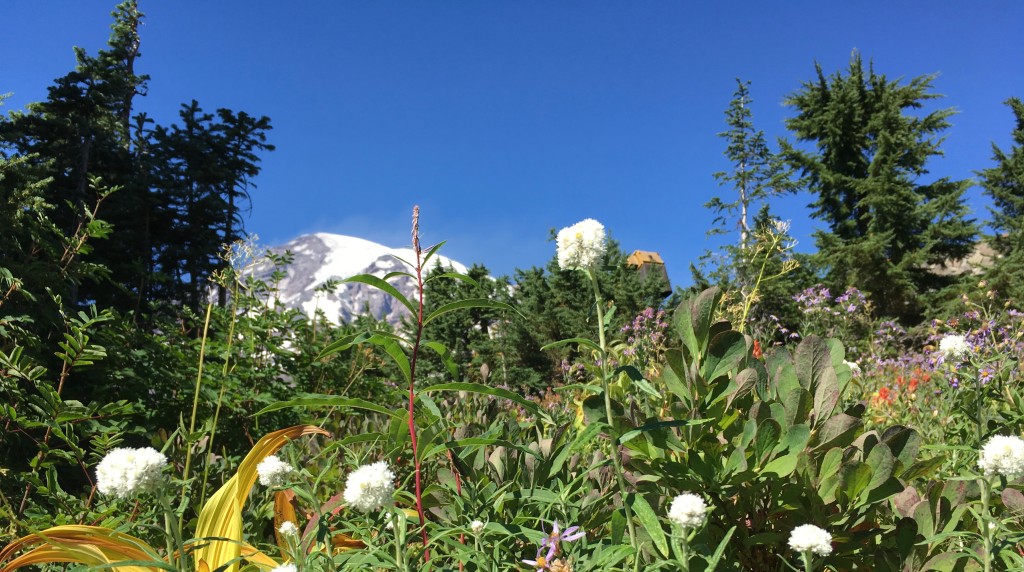 Such a contrast to my previous eight hours in the park where it was calm, peaceful, tranquil; no crowds! It was getting late, I was exhausted and decided to make this my last stop before exiting the park. I hiked back to the car and headed for Ashford. What a great day!

By late afternoon, I’d arrived at Alexander’s Lodge B&B where I’d spend the night. A quick stop to drop my bags before I headed down the road for dinner and a couple of beers sitting outside at the Copper Creek Inn. I like to try the local brews when I travel, but the Alaskan Amber from Juneau, Alaska sounded too good to pass up! 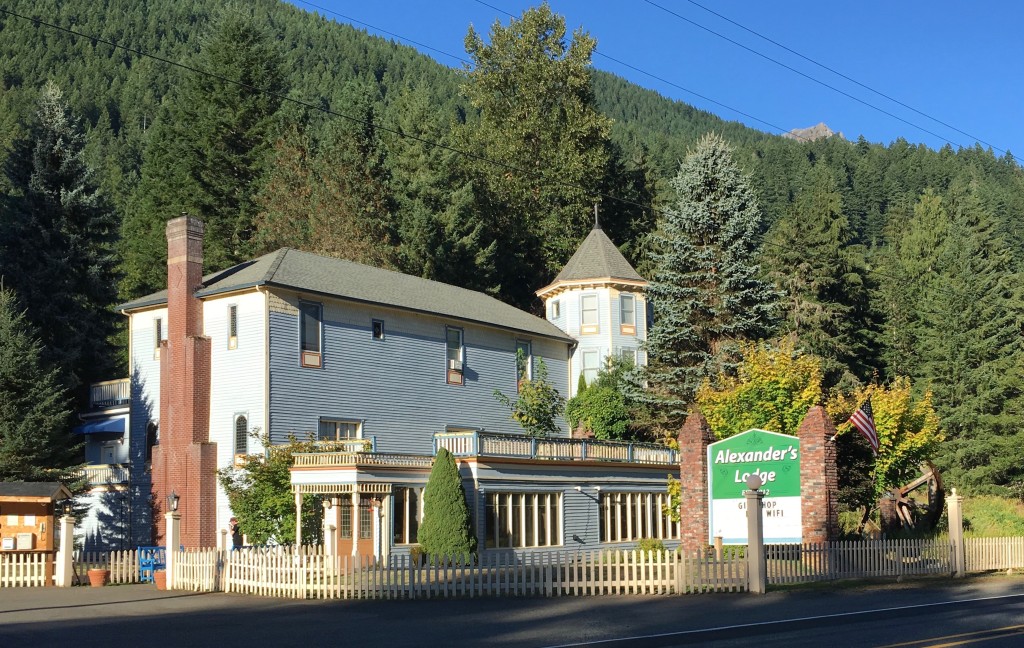 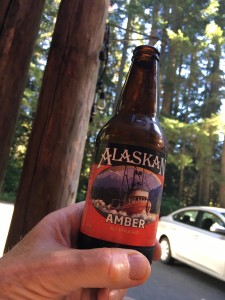 By mid-morning on Sunday I was on the road back to Seattle. Once there, I turned in the rental; checked in at the hotel and got directions to nearest light rail station. It was an easy 4 block walk.

The initial Seattle Link Light Rail system was approved and funded by voters under the “Sound Move” ballot measure passed in November 1996. As of September 2016, it spans over 20 miles and by 2040 is pegged to grow to over 112 miles of track. In July 2017 boardings surpassed 2 million per month. This photo, courtesy of the Puget Sound Business Journal, shows the sleek, clean, state-of-the-art cars. 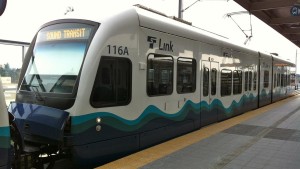 C’mon Tampa Bay, please get your public transportation act together!

I rode the train from my hotel near the Airport to downtown, where I visited Pike Place Market; mingled with the crowds; watched the guys toss the fish around; had lunch and headed back to the hotel to get ready for an early morning flight home.

I’m so glad I was able to tack on this side-trip. An absolutely gorgeous National Park and was fortunate to have super weather!