In the years following the Korean War, to prevent a surprise communist attack, the US established a network of radar stations to protect our airspace. These stations were built in some of the most isolated places in the country. In the early part of my Air Force career, I was a radar operator. Generally, this meant assignments to those remote, cold, mountainous areas. I was fortunate that my first assignment took me to the coastal mountains of Spain near the resort city of Benidorm and was lucky that my most remote area was the small town of Empire, Michigan – located in an absolutely gorgeous part of that state. But, until I left that field to work in information technology, there was always the thought I’d find myself at some inhospitable remote areas of Montana like Miles City Air Force Station or Yaak AFS or Cut Bank AFS or Kalispell AFS. I never spent time in Montana until I recently traveled to that beautiful state to visit Glacier National Park near Kalispell. Oh, I how wish now the Air Force had sent me to one of those places many years ago!

The park is located in northwestern Montana on the US-Canadian border. Combined with the cross-border Waterton Lakes National Park, it forms the Waterton-Glacier International Peace Park – designated as the world’s first IPP in 1932. Glacier NP itself encompasses in excess of a million acres; hundreds of lakes and a wide variety of flora and fauna. In the mid-19th century, 150 glaciers existed within its boundaries. Only 25 remain today and sometime in the near future (up for debate exactly when) they will all be gone. Believe in global warming or not: the planet is definitely heating up!

Before the trip, I’d purchased the book Glacier National Park by Becky Lomax which was very helpful both before and during my time at the park. What I was not prepared for was the smoke in the park! If I had visited the park’s Facebook Page, I would have realized there was a forest fire in the park (called the Sprague fire) and, combined with other fires in this country and Canada, the smoke was very noticeable. There was even an air quality monitoring device temporarily in place. 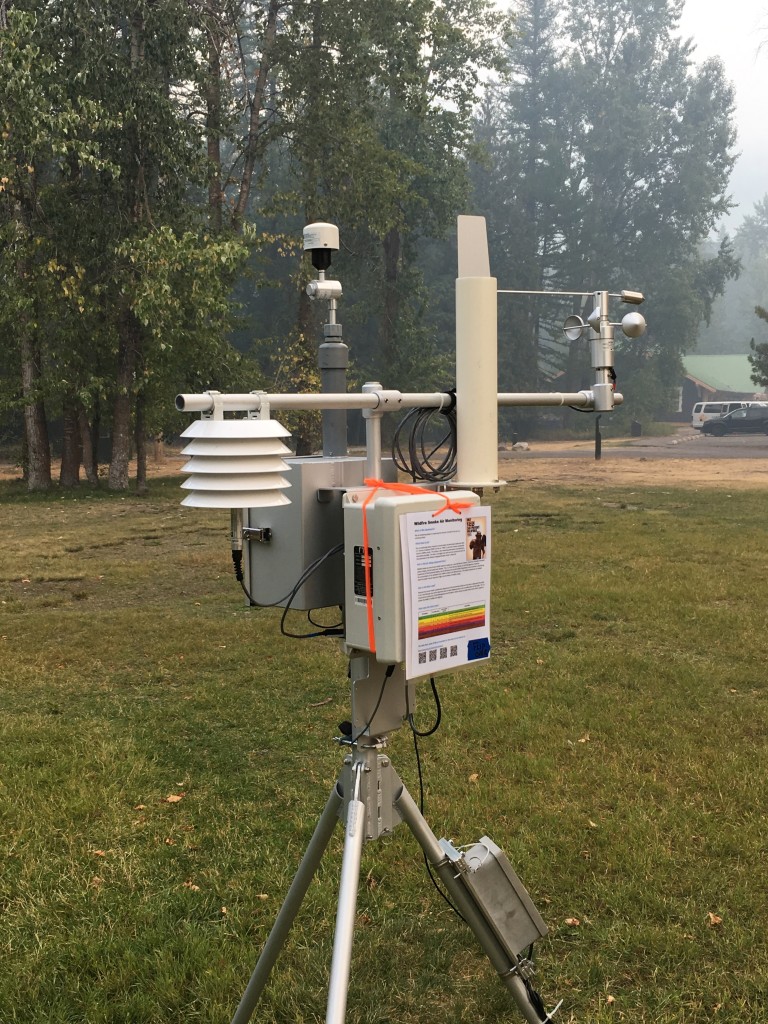 We stayed in the park at the Motel Lake McDonald, a modest, rustic motel – but nicely located near a camp store and a couple of restaurants, including one at the Lake McDonald Lodge. We were a group of 40 like-minded folks, who thrive on staying both physically and mentally active. Road Scholar trips fit the bill, providing knowledgeable guides and stimulating speakers. A smokey park was not going to stop us!

In addition to infield discussions by the guides that were with us every day, we also had classroom presentations by scholars in their fields of expertise: geology, historical photography and Native American culture. We also had access to nightly Park Ranger talks. Truly, an experience that stimulated us both physically and mentally!

Over the next few days we headed out in four separate vans to explore this gorgeous place with four well-trained and accommodating guides. We each could choose what type of experience we wanted that day, based on physical activity and areas of interest: (1) a mellow, slower paced group; (2) a low-moderate; (3) a high-moderate and finally (4) a fast-paced hike group. 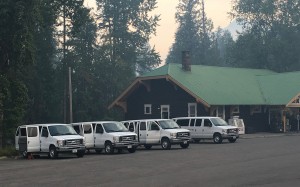 Some of the highlights of those hikes….

Trail of the Cedars

The trees here are thought to date back to the 1500’s and form the easternmost cedar-hemlock forest in the country. The trail is mostly a raised boardwalk over the marshy terrain, making it very easy underfoot. Below our main guide, Leila Robinson, stops to explain the giants we are about to see. 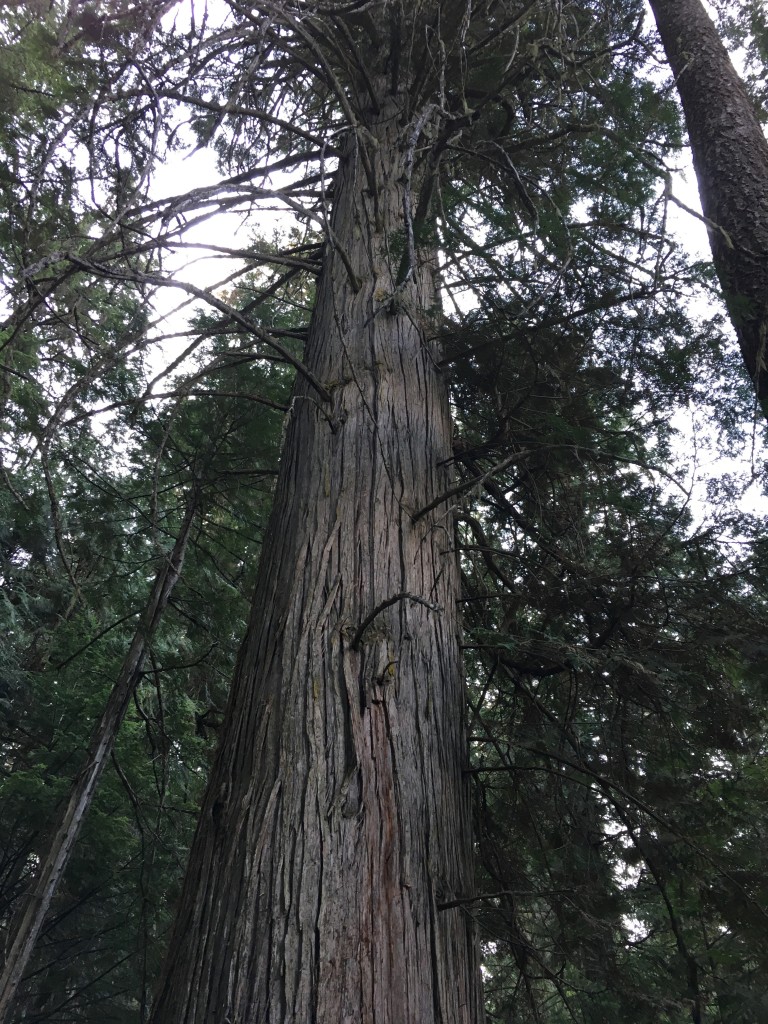 The trail is dotted with fallen trees that become “nurse logs” – which Becky Lomax defines in her book as “fertile habitat for hemlocks and tiny foamflowers.” 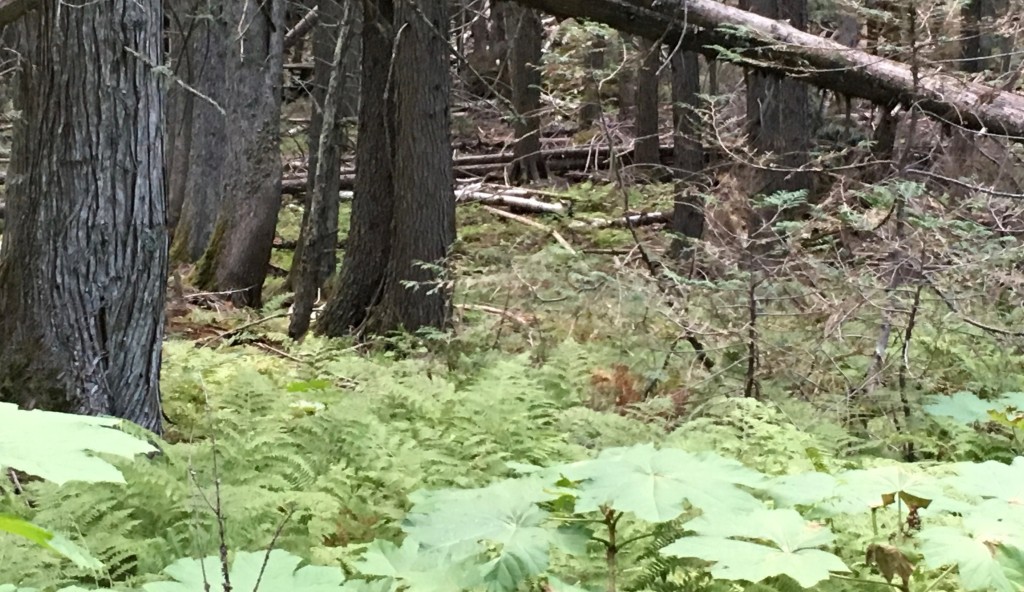 At the end of Trail of the Cedars, we turn uphill alongside the roaring water of the Avalanche Gorge and begin our hike to Avalanche Lake.

At this point, the fast-paced hiker group joins up with my high-moderate group, as one of their hikers takes a nasty fall and requires medical attention – she receives several stitches and joins back in all the fun the very next day! 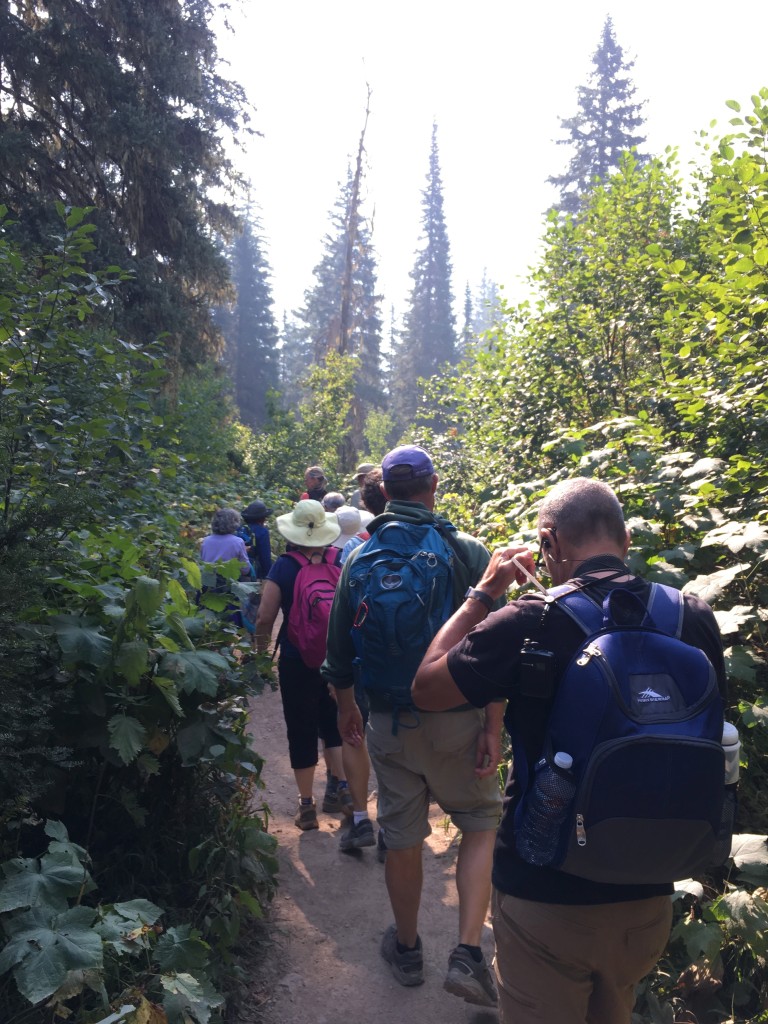 Stunning scenery at every turn! 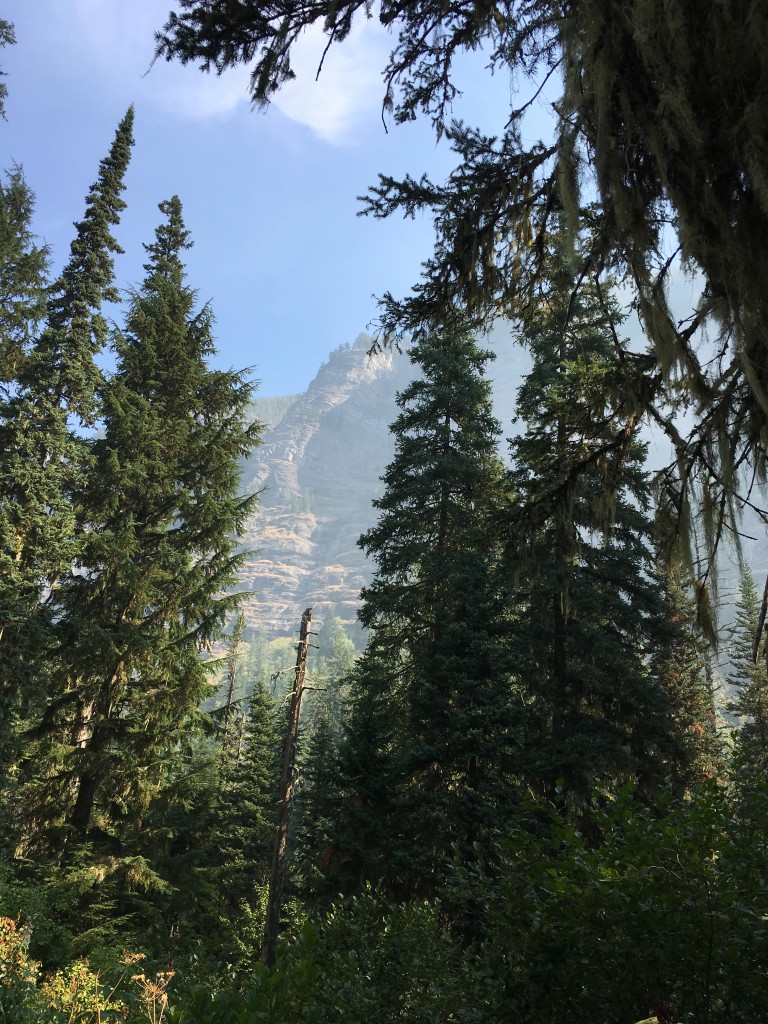 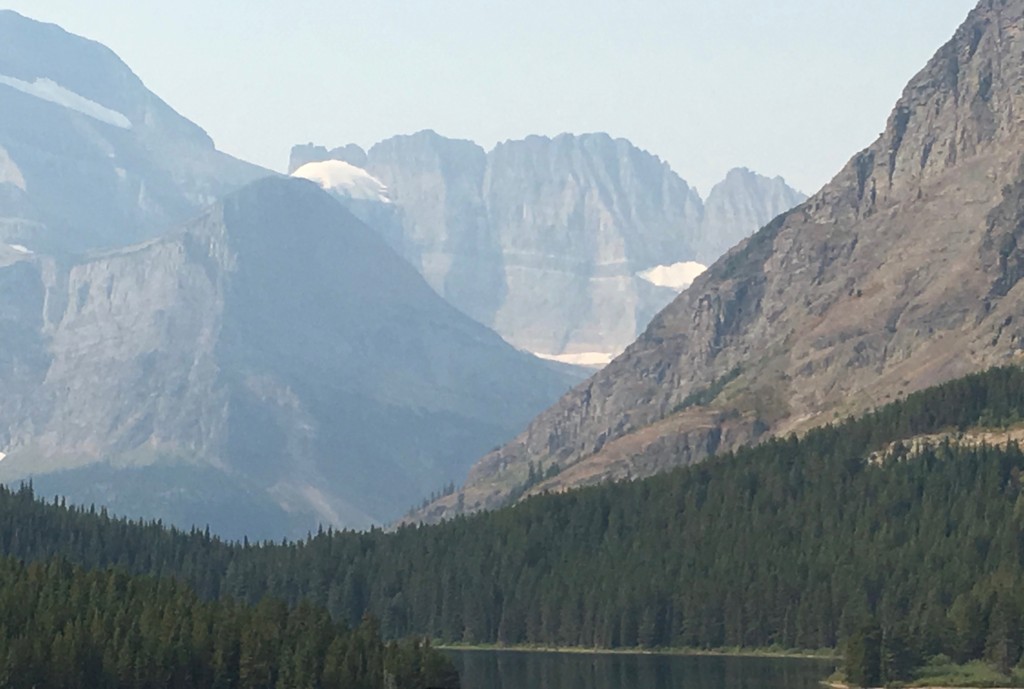 We arrived at Avalanche Lake at lunchtime and find a grizzly bear enjoying his/her lunch across the water! The shot on the left was taken with my iPhone – great for most photos, but not so much for detail at distances. Thanks to Tom Burke and his Canon PowerShot SX50 HS with a super lens for sharing the closeup on the right. 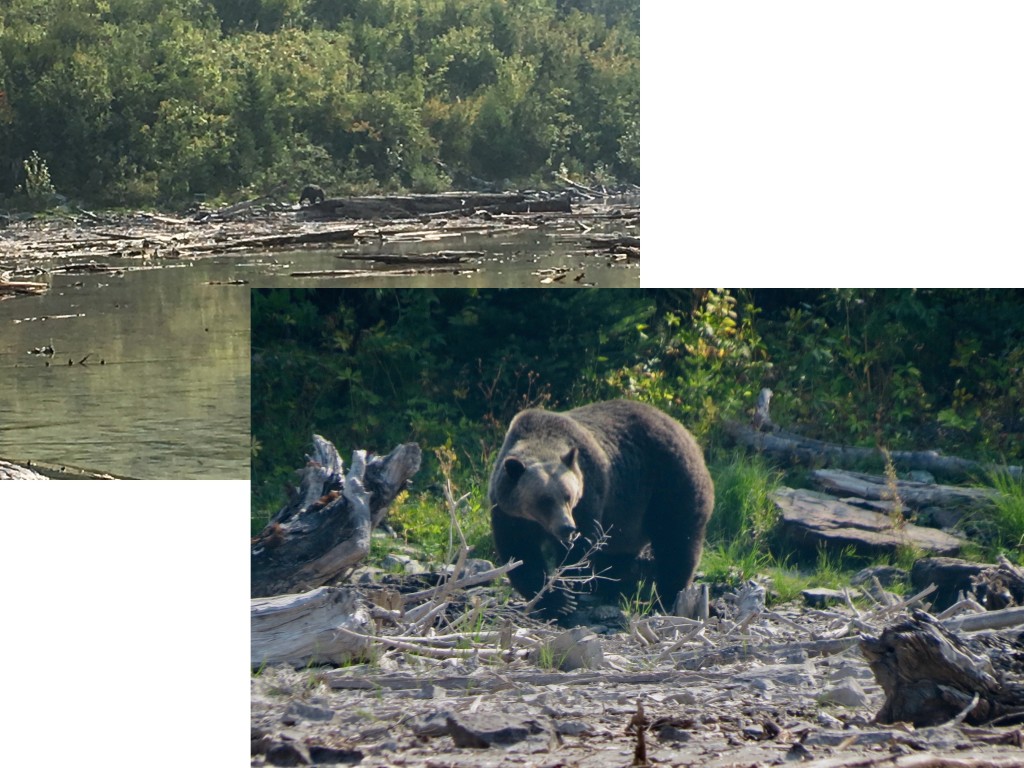 The water level in Avalanche Lake was very low in September when we visited. Lots of exposed logs and other debris – but, beautiful still. 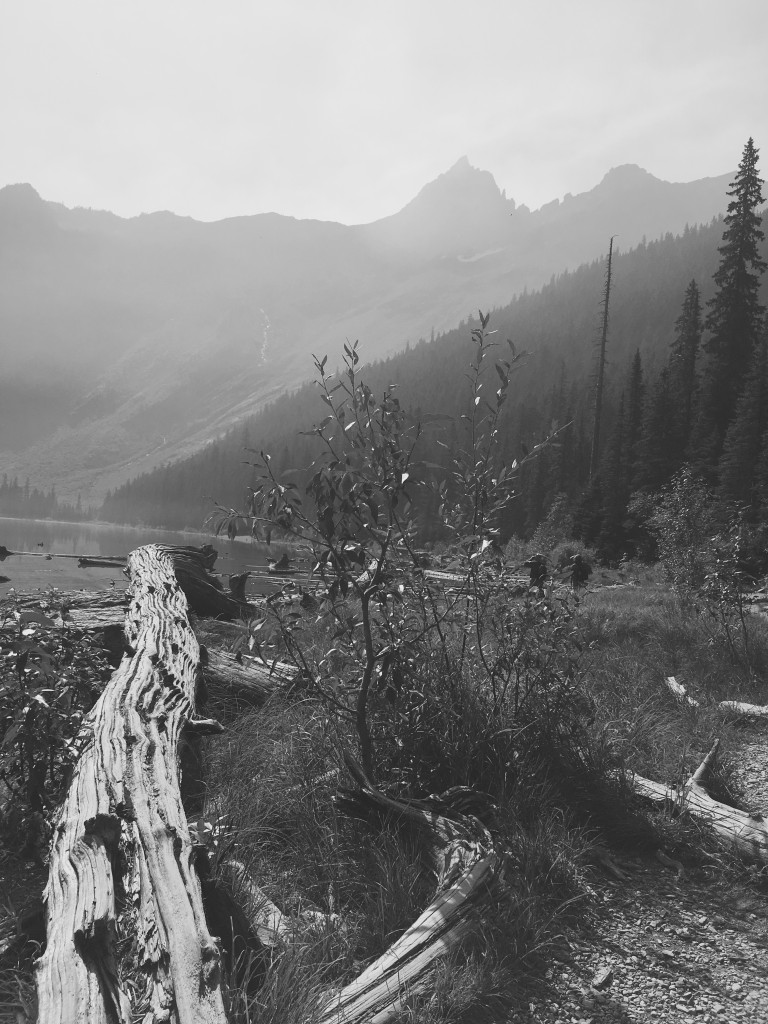 Avalanche Creek parallels most of the trail.

McDonald creek is actually the longest river in the park. Originating near the continental divide, it travels almost 26 miles before emptying into Lake McDonald. The falls are at the end of a relatively easy, short hike – just watch your step it can get slippery!

The Continental Divide National Scenic Trail (Continental Divide Trail, for short), runs 3,100 miles from Canada to Mexico, passing through five states: Montana, Idaho, Wyoming, Colorado and New Mexico. About 110 miles of it traverses Glacier National Park. The trail is famous for its many hikers and backpackers, some called thru-hikers, attempt to hike it in its entirety in a single season. We hiked a very tiny portion of it! 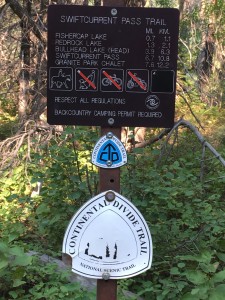 Just off the trail, we approached Fishercap Lake to see a female moose wading at the water’s edge. The moose is a massive animal – the largest member of the deer family and the tallest mammal in North America. Our guide told us the moose, if agitated or threatened, can be more dangerous to humans than the grizzly! Happy to have this shallow lake between her and us! My photo on the right with the red circle around the moose; left, Tom’s great closeup. 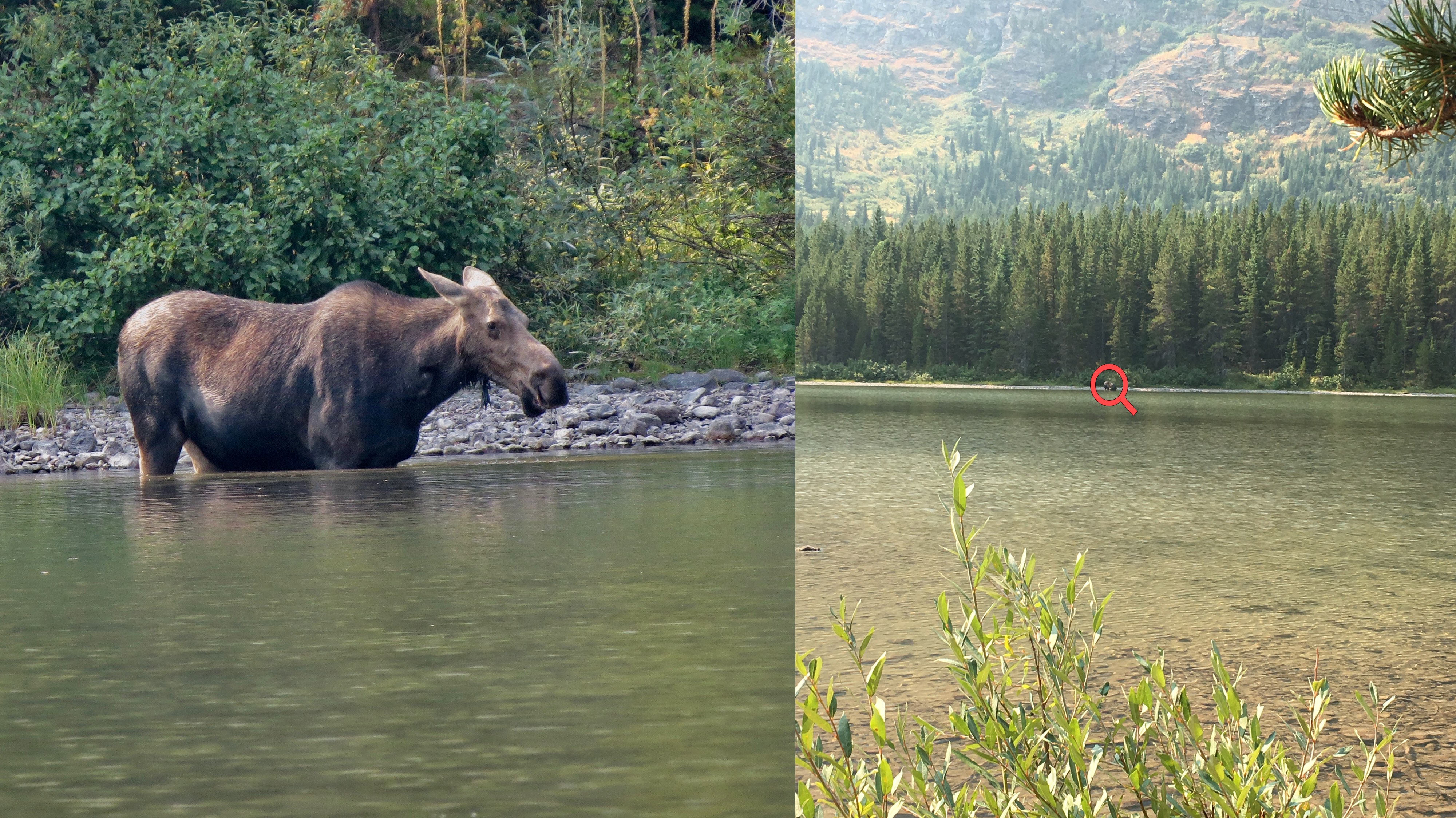 We then skirted the western shore of Swiftcurrent Lake, where we could see, with smoke in the background, the Many Glacier Hotel on the northeastern shore. 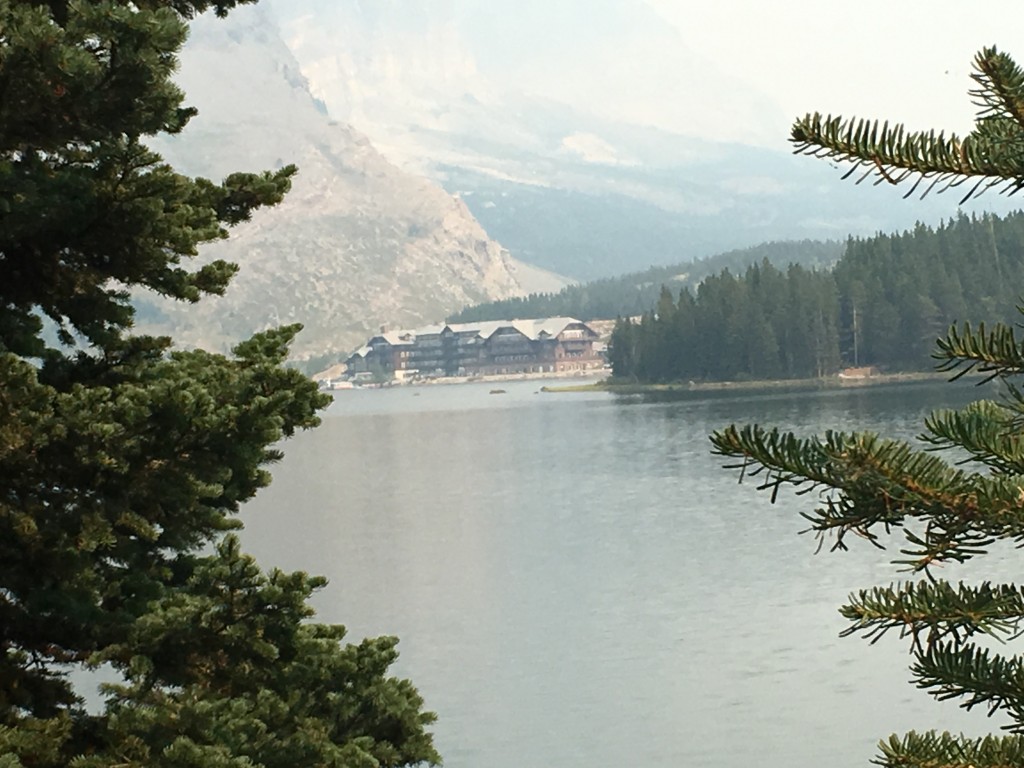 We hiked on to Lake Josephine, stopping at the shore to eat our box lunches. We hiked back, to join up with the others in our group, via the east side of Swiftcurrent Lake (photo below). As you can see in this photo and the one above, the smoke from the forest fires was becoming a breathing hazard. It was decided that after the next day’s hikes, we’d be lodged outside of the park in Kalispell. We wouldn’t miss any planned activity in the park as the last day’s activity was rafting down the middle fork of the Flathead River, just outside the western border of the park. 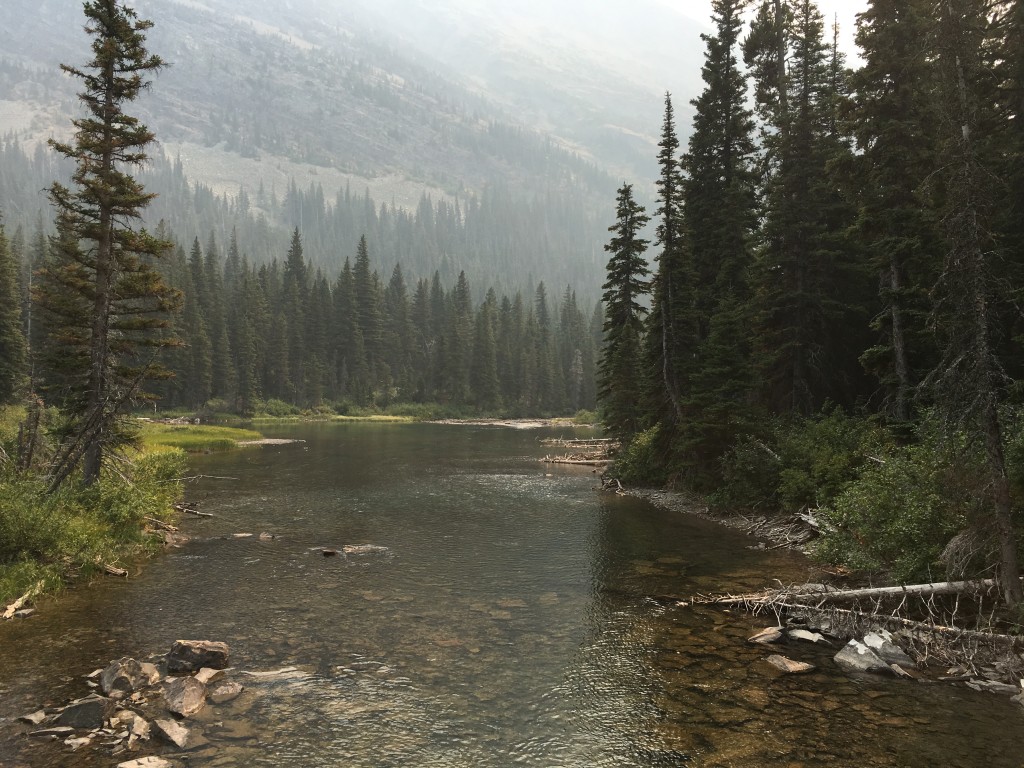 Our last hikes in the park took us up the Going-to-the-Sun-Road, an engineering marvel which connects West Glacier and St. Mary with 50 miles of one of the most scenic highways in the US. It crosses Logan Pass which sits atop the Continental Divide at about 6,600 feet.

At Logan Pass we were given the option to hike a portion of the Highline Trail or hike the Hidden Lake Trail. The Highline follows along the Continental Divide, also known as the Garden Wall in this area. We were warned if we had a fear of heights we might not want to attempt it, as a there is a ledge with the reputation for terrifying those with that fear. In most places the ledge, hanging like a shelf on the Garden Wall, is only six to eight feet in width, with thousand foot drops to the road below. I opted for the more down-to-earth Hidden Lake Trail!

Hidden Lake trail is a 2.6 mile round-trip to an overlook. A boardwalk climbs the first half through an alpine meadow covered with fragile plants and flowers and a view of Clements Peak in the distance. 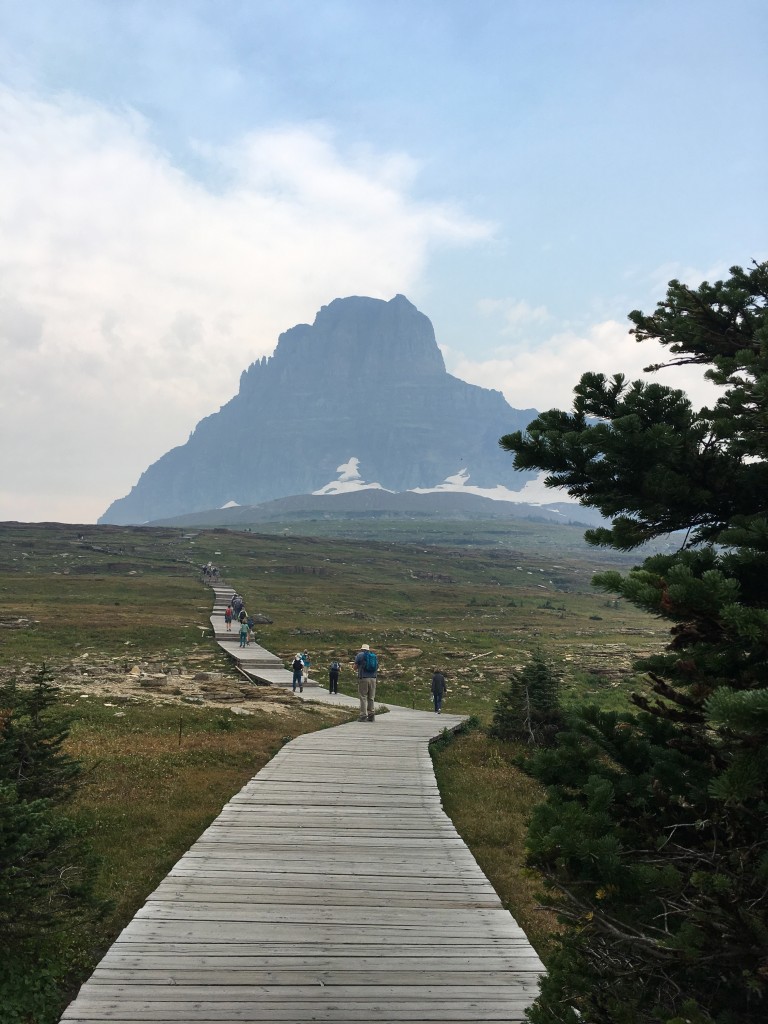 The remaining portion ascends over argillite rock. I digress here for a bit of geology I learned on this trip….

The Precambrian Era is the earliest of the geologic ages and comprises all of geologic time prior to 600 million years ago. Montana, and in particular Glacier National Park, is unique in that it contains, at the surface, sediment that dates back 1,600 to 800 million years ago. This anomaly was the result of plate movements in which older sediments were thrust over younger sediments. Many instances of ancient argillite are found in the park. 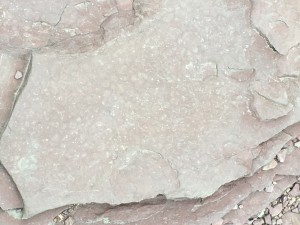 The Glacier Park Boat Company, which dates back to 1938, operates tours via their classic wooden boats. One evening we boarded one these craft just before sunset for a tour around Lake McDonald. As I wait to board, you can see folks wading in the lake over my left shoulder. I found all the waters in the park much too cold for even wading – maybe I’ve lived in Florida too long! 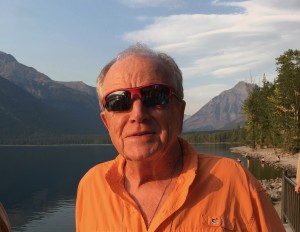 In this shot, you can clearly see the smoke rising from the Sprague fire just over the ridge from where we stayed. 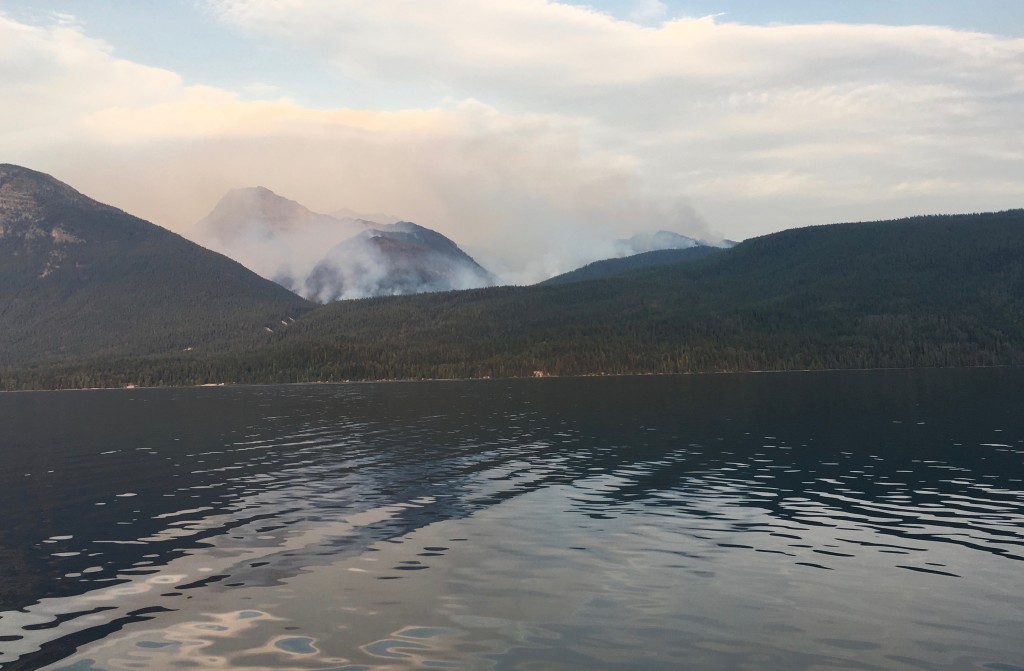 In this picture of the sun setting behind Howe Ridge, the stark, burned trees along the ridge are a reminder of the Robert fire, one of many fires that devastated the park in the summer of 2003. 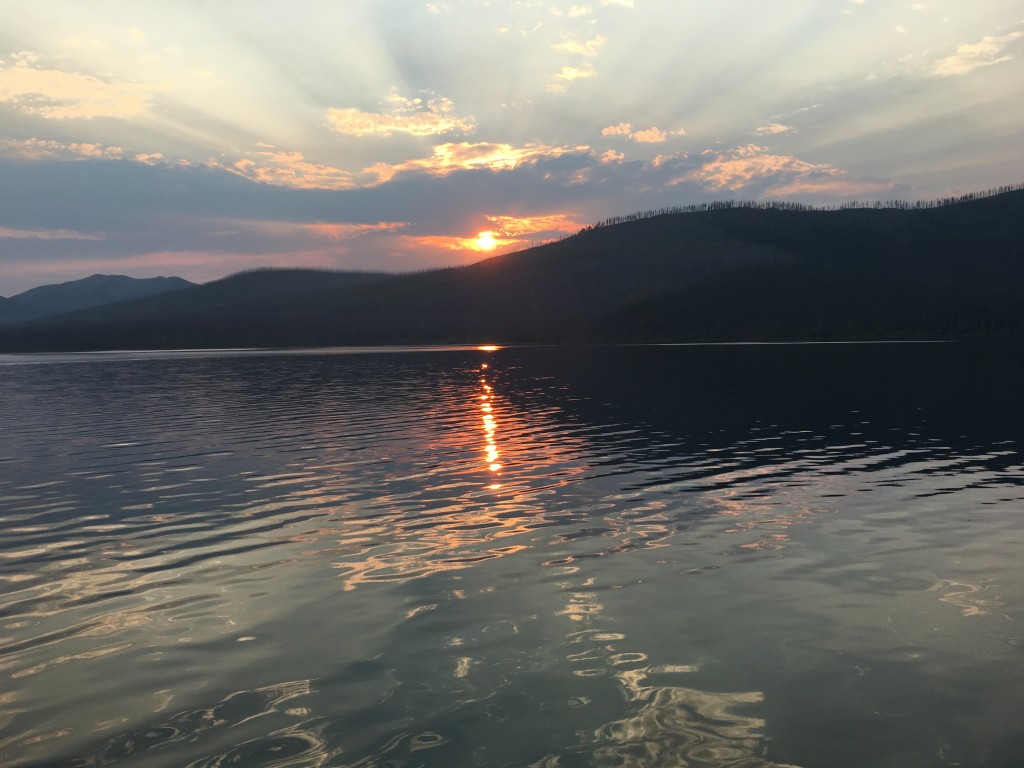 Our last planned activity was a scenic raft trip on the Middle Fork of the Flathead River along the southwestern boundary of park, followed by a BBQ dinner and a chance to say our good-byes.

It was an easy float (no roaring rapids!), with a guide in the back doing the major rowing/steering. We were called upon to help with rowing occasionally. 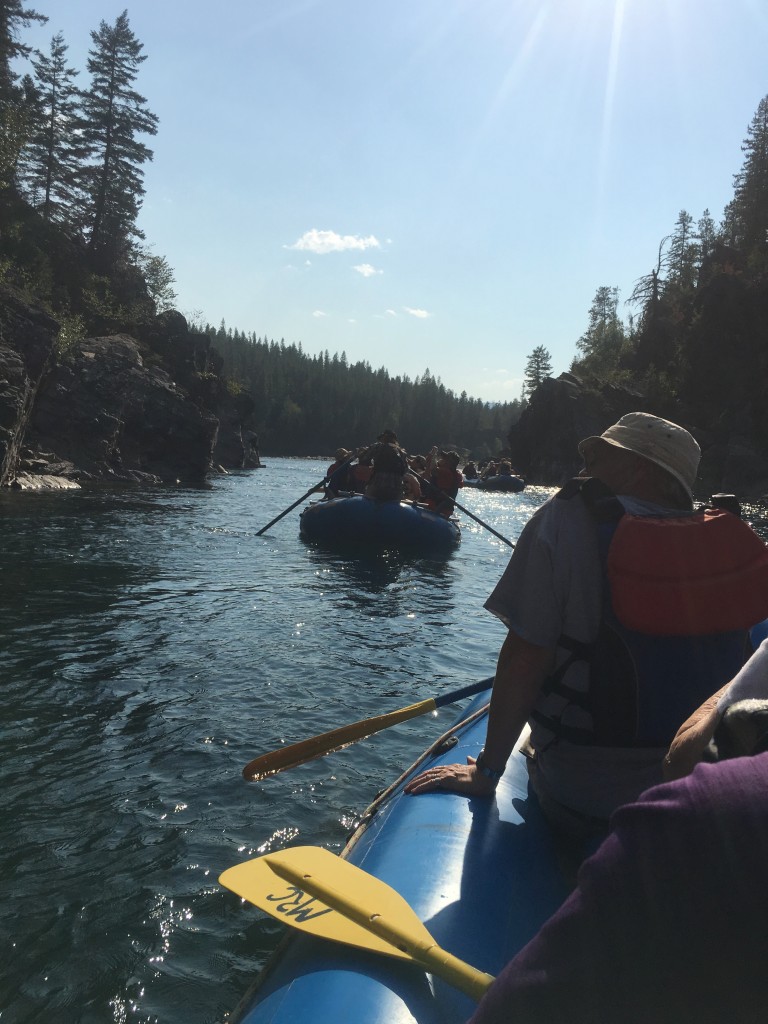 We stopped along the way, to let a few hardy souls jump in. 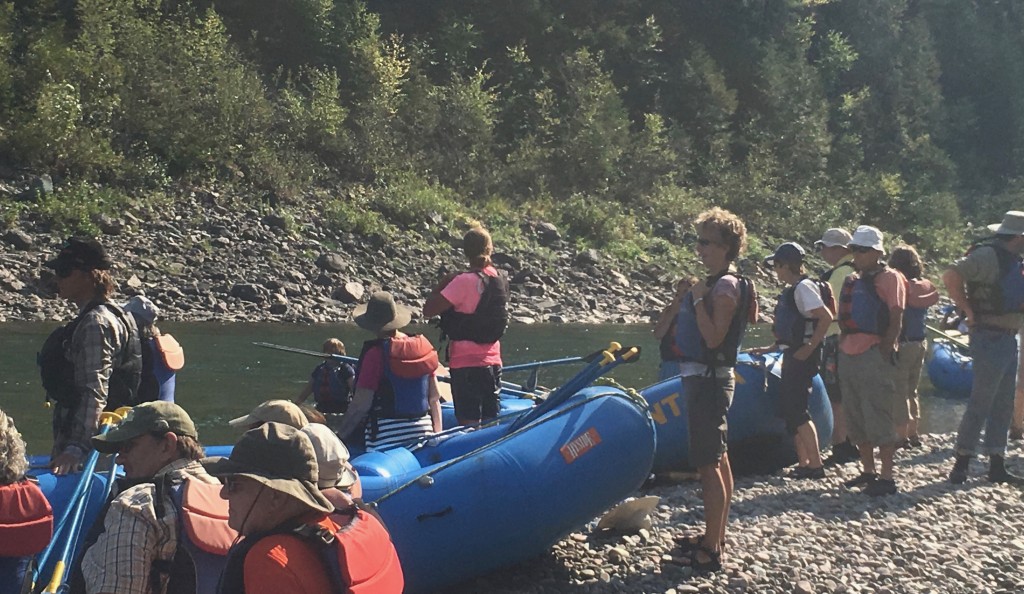 The smoke certainly limited visibility and was nuisance. We viewed most of the glaciers through a haze. We did get a fairly good view of Grinnell, Salamander and Gem (the smallest in the park) glaciers. The guides were great at adjusting schedules and my fellow travelers were all good sports in “going with the flow!”

Kathy and Alan Shaw & Joanna and I met some forty years ago – see my post, My Friend Alan Shaw. Since both Joanna and Alan passed away, they would be happy know Kathy and I have kept the friendship alive and well! We decided to take this trip with Road Scholar together. We had a wonderful week with the group! Here we are at Logan Pass with the Continental Divide in the distance. 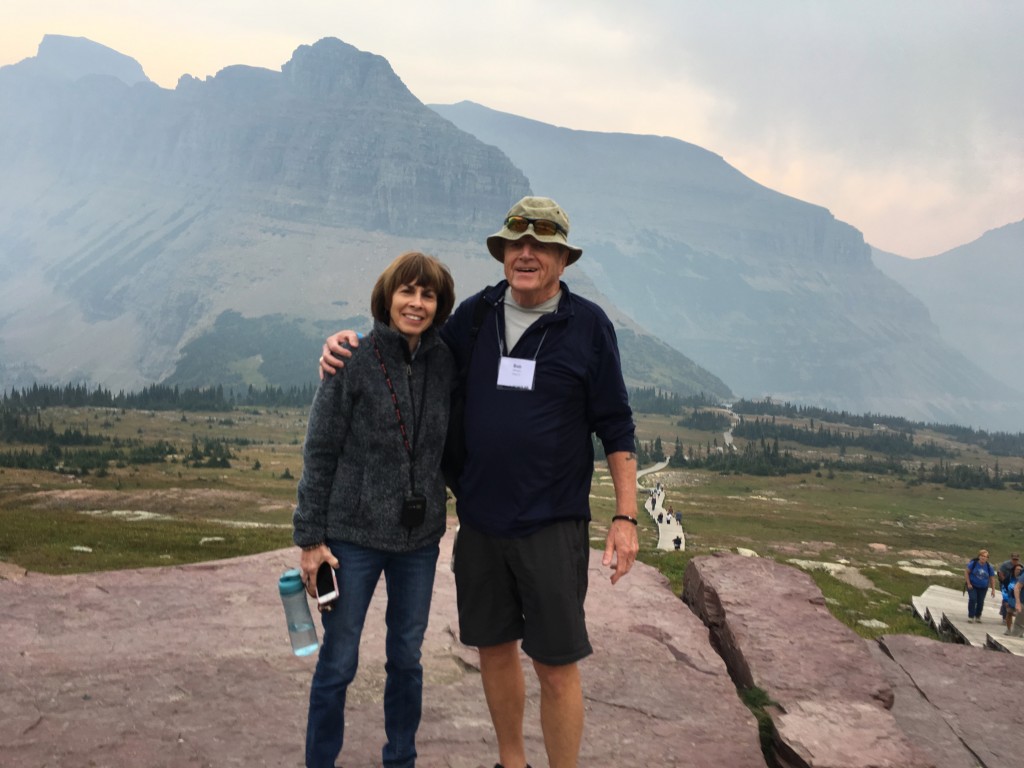