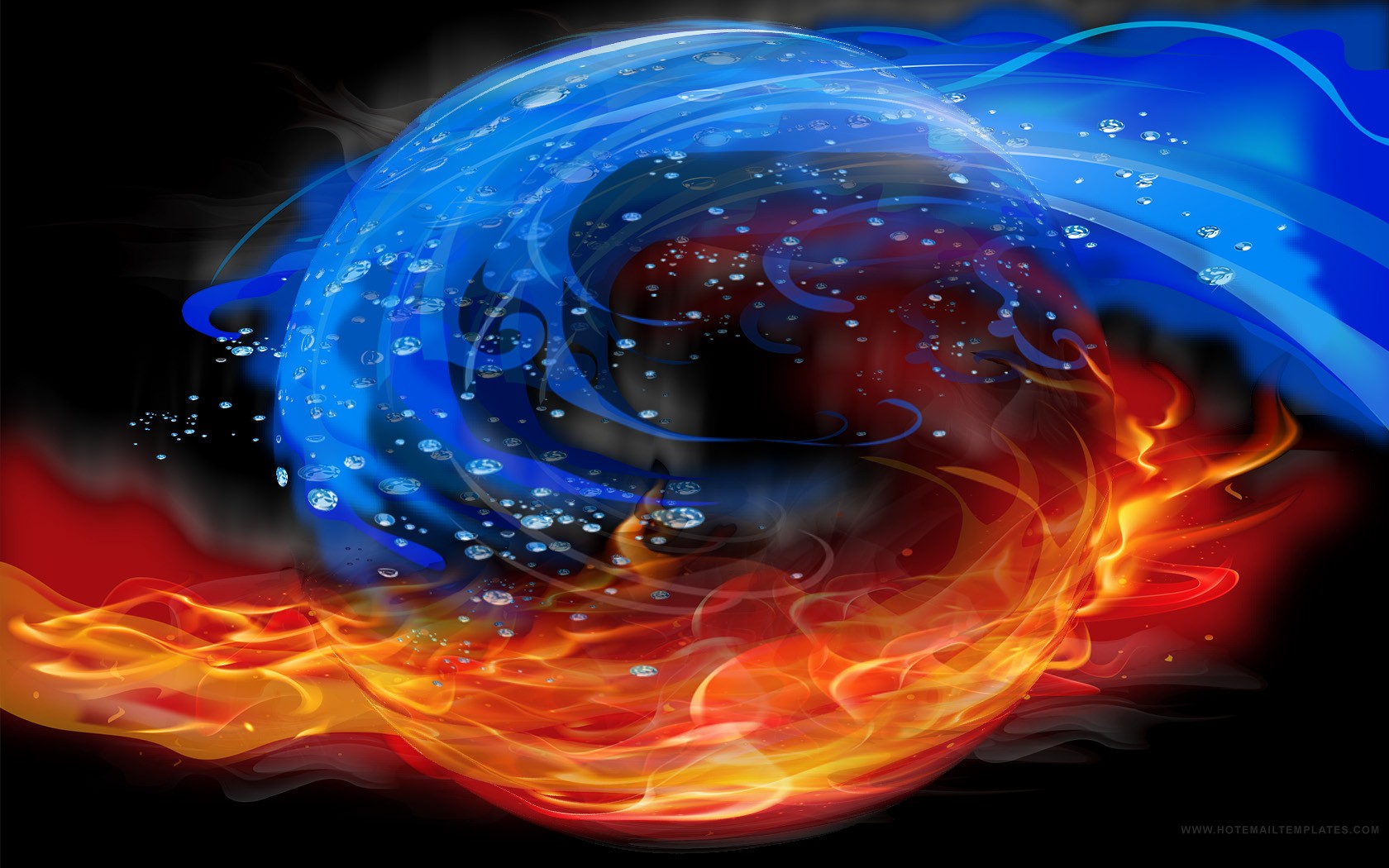 The Thomas fire, the largest in California’s modern recorded history, began on December 4, 2017. Before it was finally contained on January 12, 2018, it burned more than 280,000 acres; claimed just over 1,000 structures and resulted in two deaths – one civilian and one of the more than 2,800 firefighters who battled the blaze. The areas heavily impacted were in and around Ojai, Santa Paula, Ventura, Montecito, Carpinteria, Santa Barbara and Fillmore.

On December 4, AccuWeather Senior Meteorologist Ken Clark said a normal Santa Ana wind event would last for a 12- to 24-hour period of the highest winds and then decrease. “This one will be a four- to five-day event, which will make fighting ongoing fires much more difficult. The risk for additional fast-moving fires is quite high.” This animation shows how rapidly the fire expanded in just one week.

This map shows the final boundaries of the massive fire. 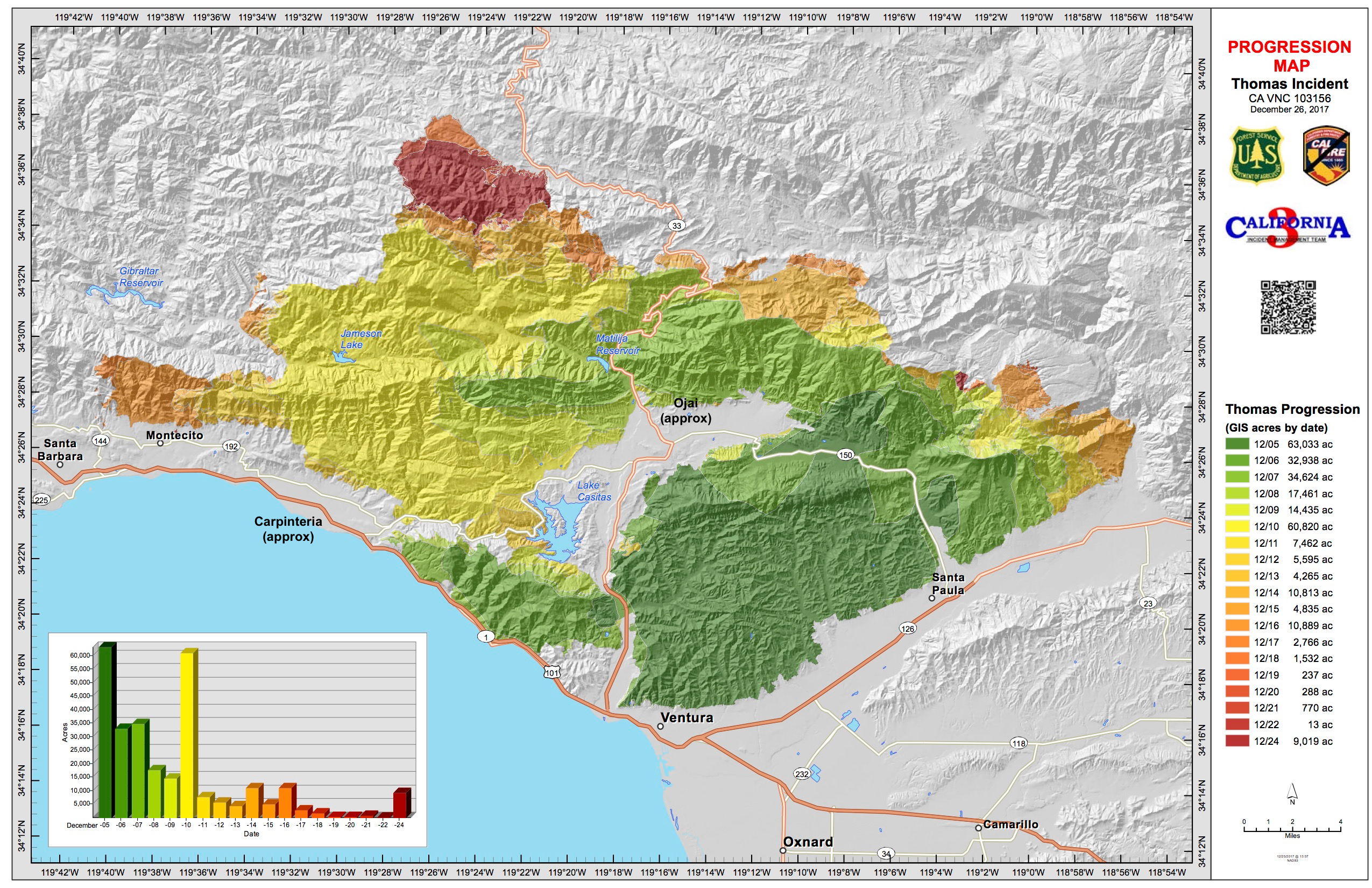 My friend, Marguerite, lives in Carpinteria (I’ve noted approximate location on map above). We kept in touch via text and Facebook as she faced mandatory and voluntary evacuation orders as she watched the hills around her home ablaze. Her car was packed so she could quickly respond to those orders.

Three months after the fires, I visited Marguerite. Fortunately, she escaped any major damage.

As a young man in the US Air Force, I met a fellow in my unit who was from Ojai, California (I’ve also put its approximate location on map above). I’ve long forgotten the guy’s name, but have forever remembered his excitement in describing his hometown. I thought, “One day I’ll try to see that place!”

The town of 8,000 lies in the Ojai valley, 90 miles northwest of Los Angeles, surrounded by hills and mountains. As Condé Nast puts it: “A place where the bohemian romance of the 1960s never soured, where daily hikes are the norm, and where organic and holistic aren’t mere marketing buzzwords but expressions of an ingrained way of life.” Chain stores are prohibited by law to encourage local small business development.

When planning my visit with Marguerite, I asked if we could visit Ojai. Little did I know when we first discussed it, Ojai would become a town surrounded by the Thomas fire. On the map, it’s clear the town proper was spared a direct hit, but the neighboring hills were not. We left Carpinteria about ten in the morning – it wasn’t long before we were in the hills where we saw clear evidence of the fire.

In the distance, bare slopes and burned trees on the ridge line; in the foreground a charred tree showing some sign of life. 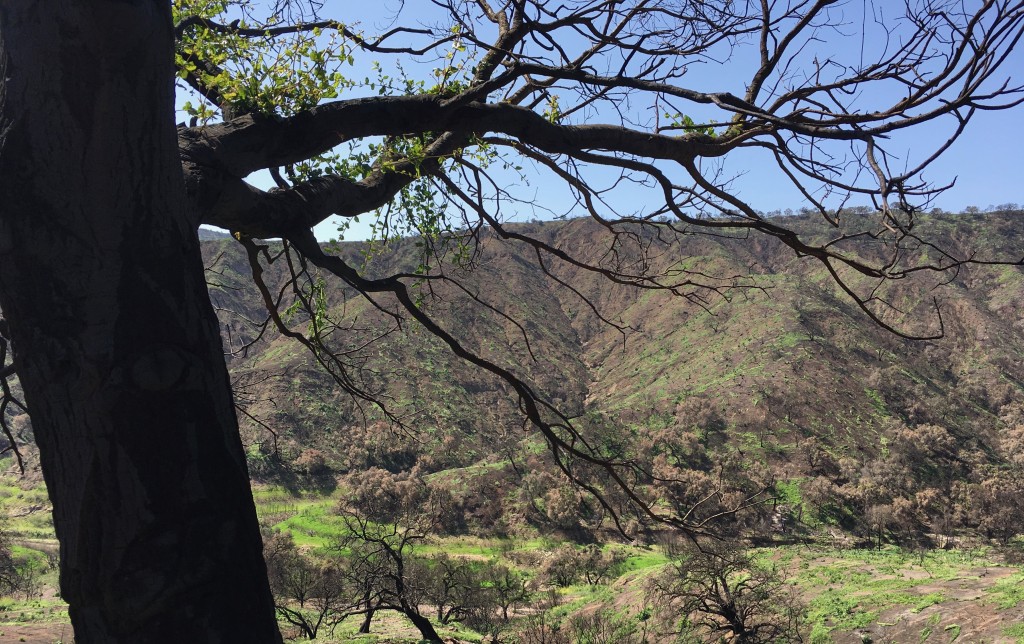 More destruction looking down at Lake Casitas – Ojai is about 7 miles east of the lake. 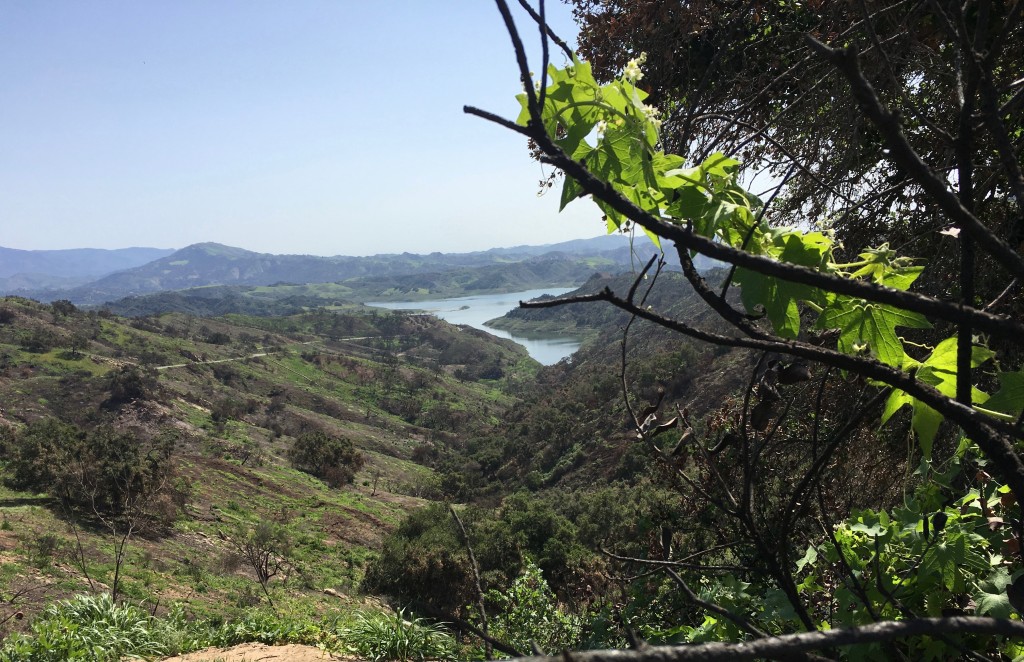 This historic arcade (in the photos below), built by Edward Libbey who made his fortune in the glass industry, stretches along one side of the main street in Ojai. Here we found interesting restaurants and shops, some featuring art by Ojai locals.

The first photo, by Hilary Swift, appeared in the New York Times on December 9, 2017 and was captioned: “Downtown Ojai was cloaked in smoke on Friday, though it was spared from the flames.” See more of Hillary Swift’s impressive photography of the Thomas fire by clicking here.

The second photo, was snapped by me on April 13, 2018, from the opposite end of the arcade. If you ever find yourself in Ojai, Bonnie Lu’s Country Cafe (run by the late Bonnie Lu’s family) is the perfect spot for lunch. 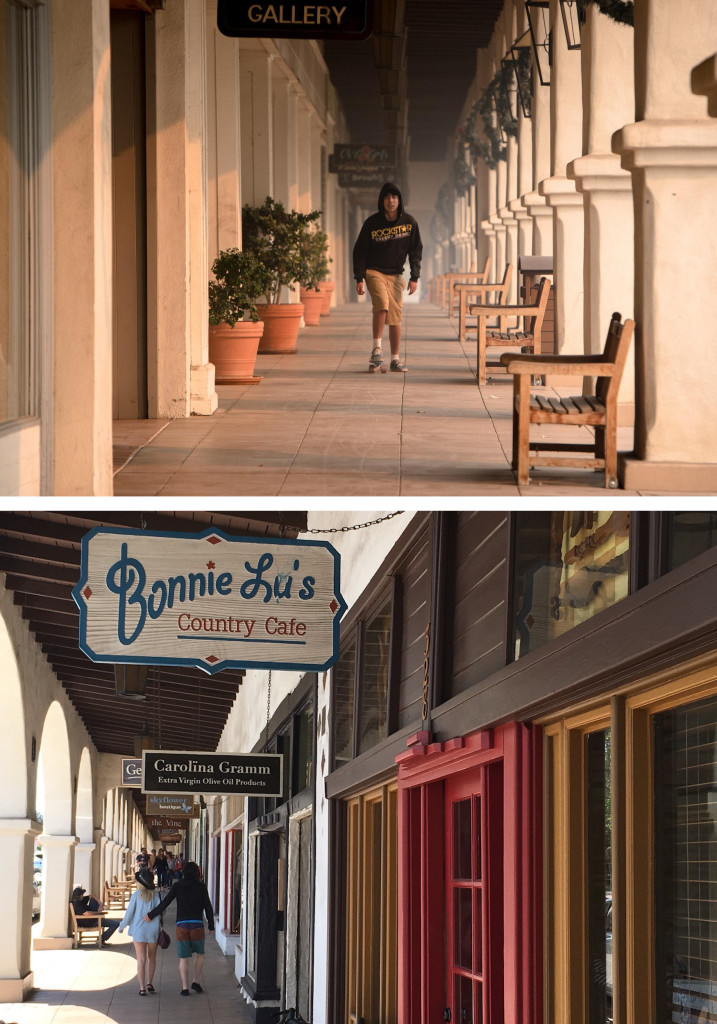 In addition to having lunch, we walked the streets of the downtown area, visiting Libbey Park (named after you-know-who), a couple of shops and the obligatory ice cream shop.

We then headed for the hills further inland. Marguerite and Diana wanted to check the conditions of some of their group’s favorite hiking trails. Tragically, the normally green hills were barren. 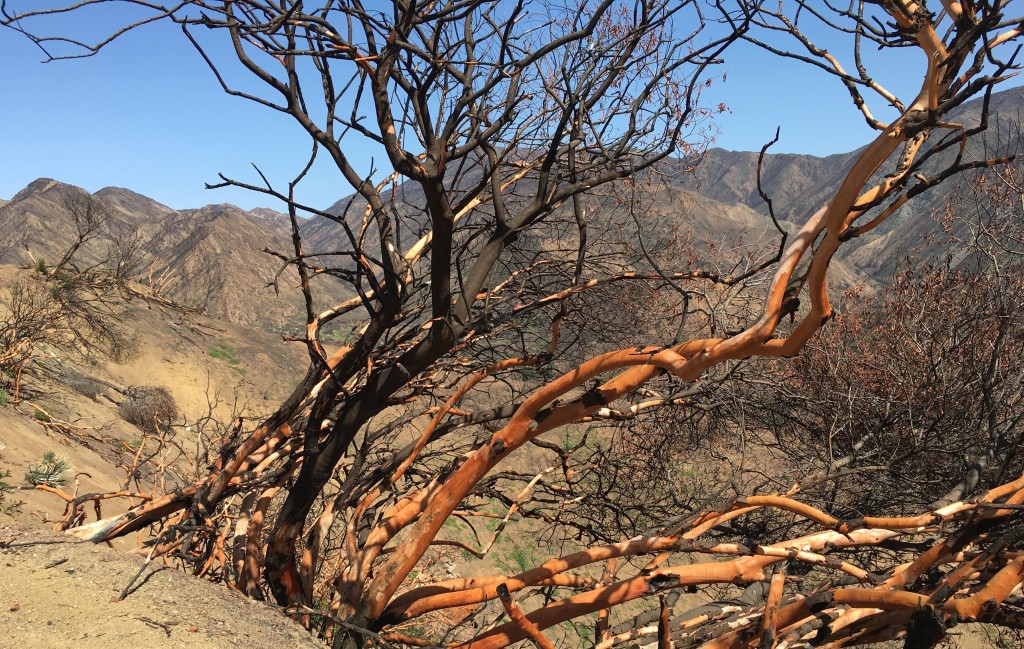 On January 8-9, heavy rains fell on the hilly enclave of Montecito, which sits just east of Santa Barbara. In the predawn hours of the 9th, the bare, fire-charred hills had reached their saturation point. Downed trees, boulders, vehicles and other debris rushed down the slopes carried by waist-high mud. Twenty-one residents ranging in age from 3 to 89, lost their lives. More than 125 homes destroyed, 300 damaged.

US Highway 101 (or as my California friends say, “The 101″), the main north/south artery in the area, was closed for almost two weeks after the Montecito mud and debris flows – in some places it was under 12 feet of muck! This gave Marguerite a sense of isolation and added hours to the commute for thousands.

Santa Barbara County published this map showing the results of their inspections. I think it’s interesting to note that as the debris flow picked up more pieces of stuff, the damage intensified as it reached the bottom of the hills.

We traveled the streets of Montecito that were still passable, so I could see things up close. I took no photos there – I didn’t want to be a gawker which, in reality, I was! It’s one thing to take pictures of hillsides laid barren, but a whole lot different, and more personal, to see homes crumbled where so many perished. In a January 11, 2018 article, the Atlantic magazine did a nice job of compiling some of the more compelling photos of the devastation. Visit their website by clicking here.

Hanna Puacz was born in Poland in 1887, later changing her name to Ganna Walska. Despite a reputation as a mediocre singer, she pursued an opera career that really never took off. I’m reminded of the Meryl Streep movie, Florence Foster Jenkins, about an heiress who became an opera singer known for her painful lack of singing skill. Madame Walska, however, amassed a fortune over six marriages. In 1941, at the urging of her sixth husband, she purchased an estate in Montecito which she named Lotusland. I’ve added a green rectangle in the upper left quadrant of the SBC map to show its location. There she developed the estate into a remarkable thirty-seven acre botanical garden, containing a diverse collection of plant species, some of which can be found nowhere else on earth.

Amazingly, considering the damage all around it, Lotusland was mostly unaffected by the December fire or the January debris flow. Marguerite, who worked at Lotusland for several years and today is a docent volunteer, said, “They were fortunate. The fire was the scariest. Some embers flew onto the property and burned a few plants, but firefighters were stationed at the property and put out everything quickly. They recognized that the plants were not just landscaping but valuable in their own right.”

Below is a map of the layout of gardens, as well as just a few photos from our visit to Lotusland. 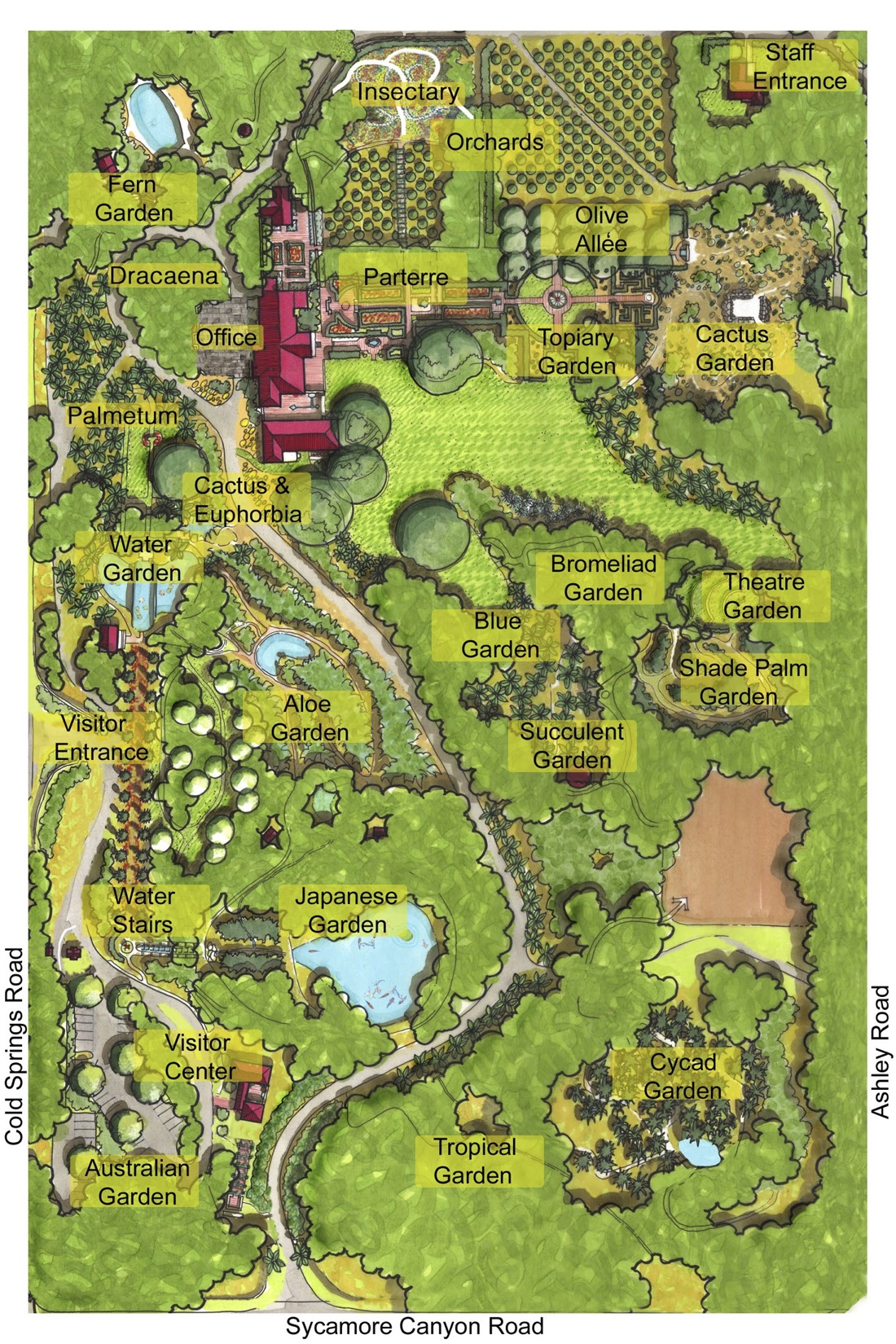 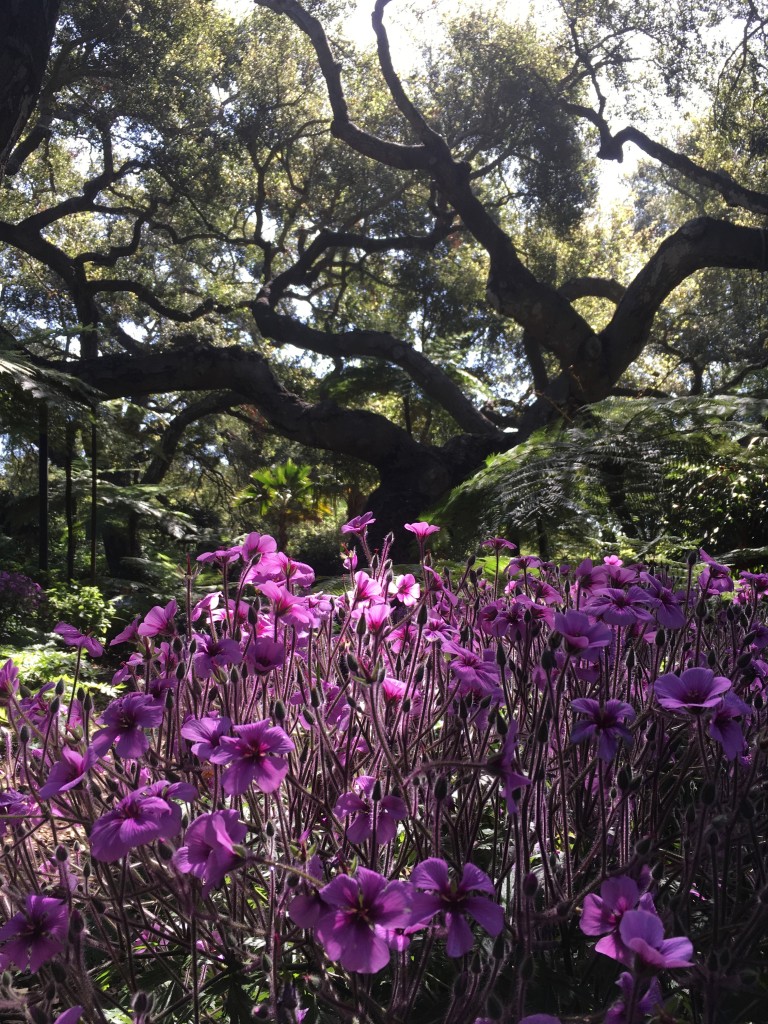 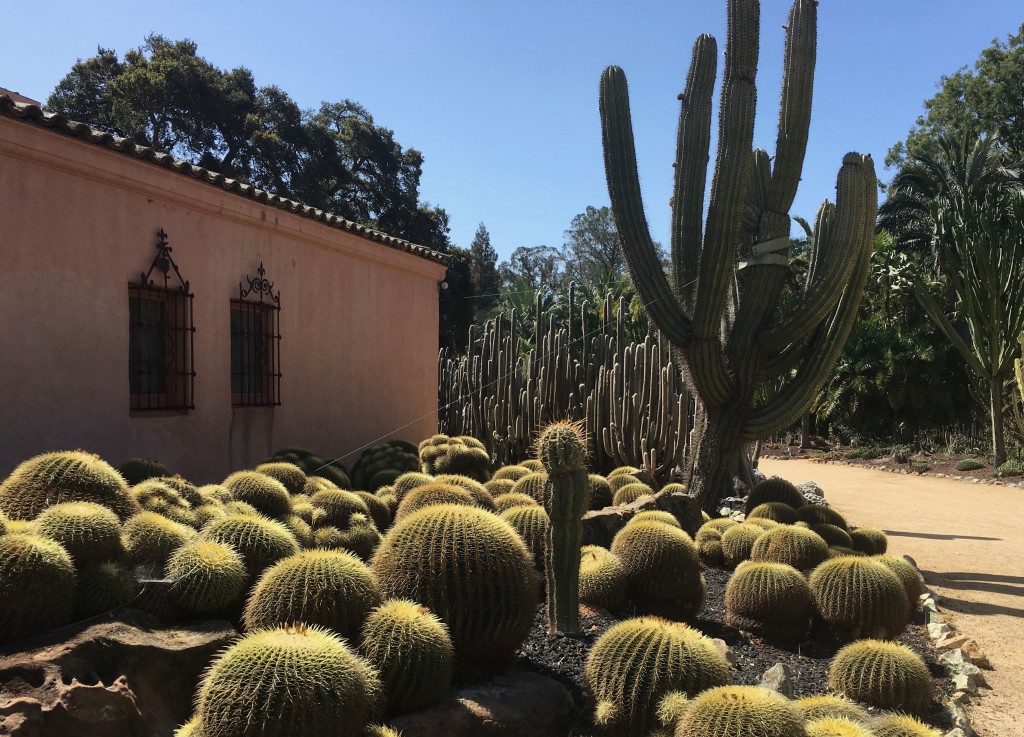 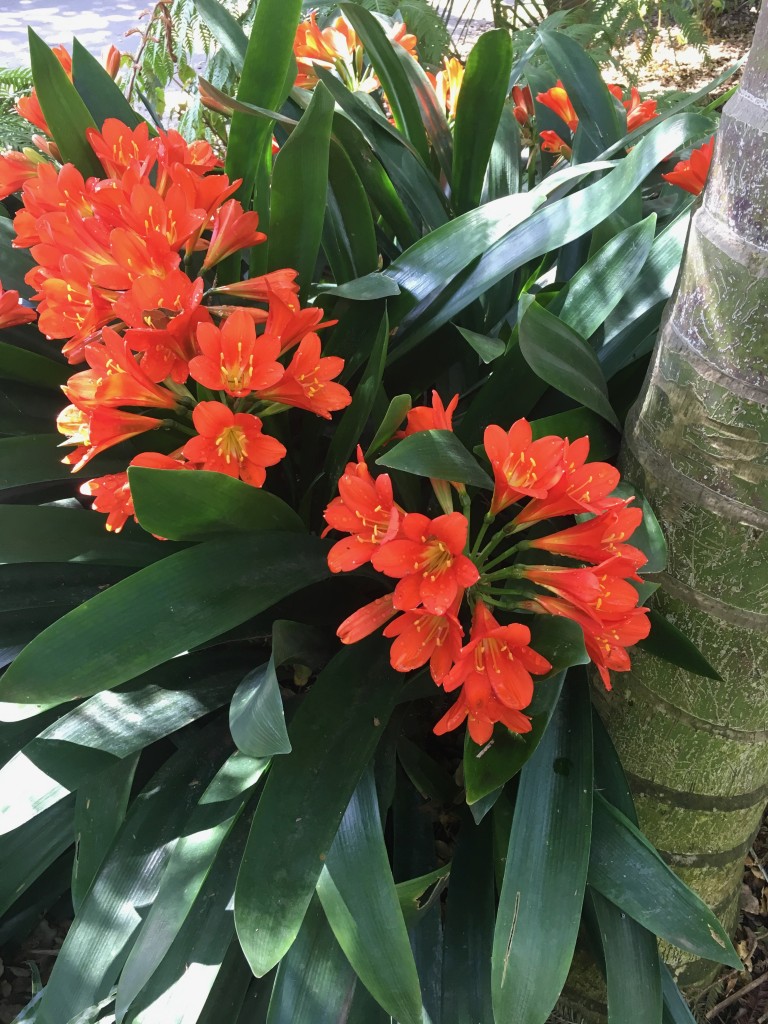 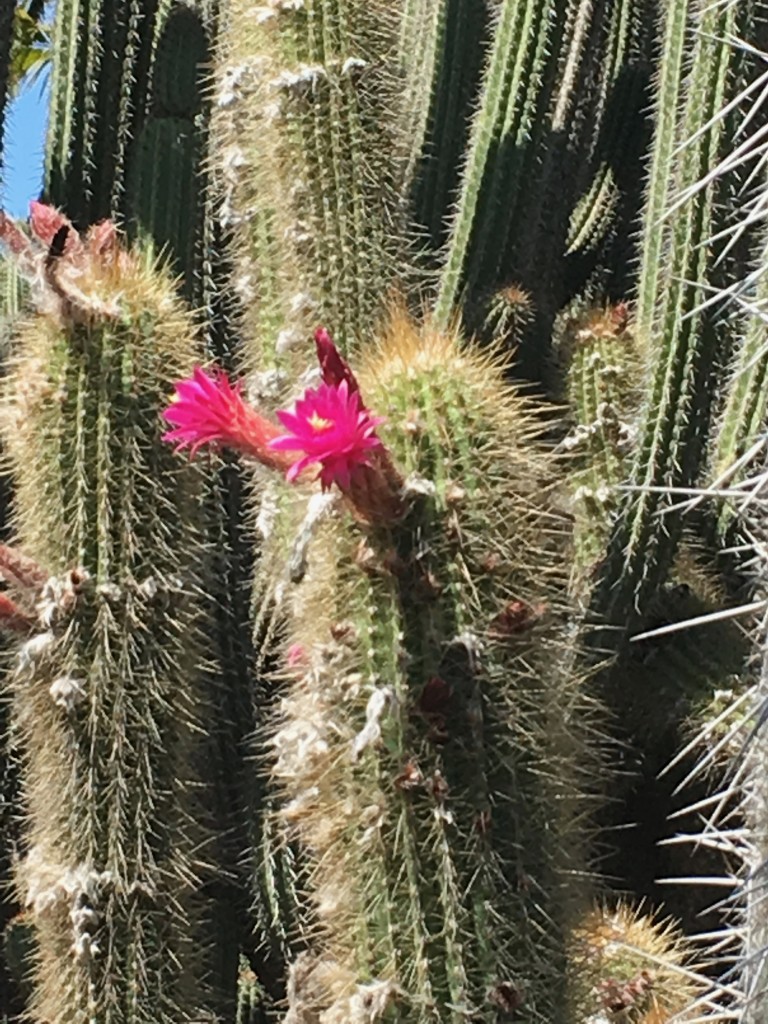 This last photo is of Diana and Marguerite under the lemon tree arbor, with its strong citrus fragrance. 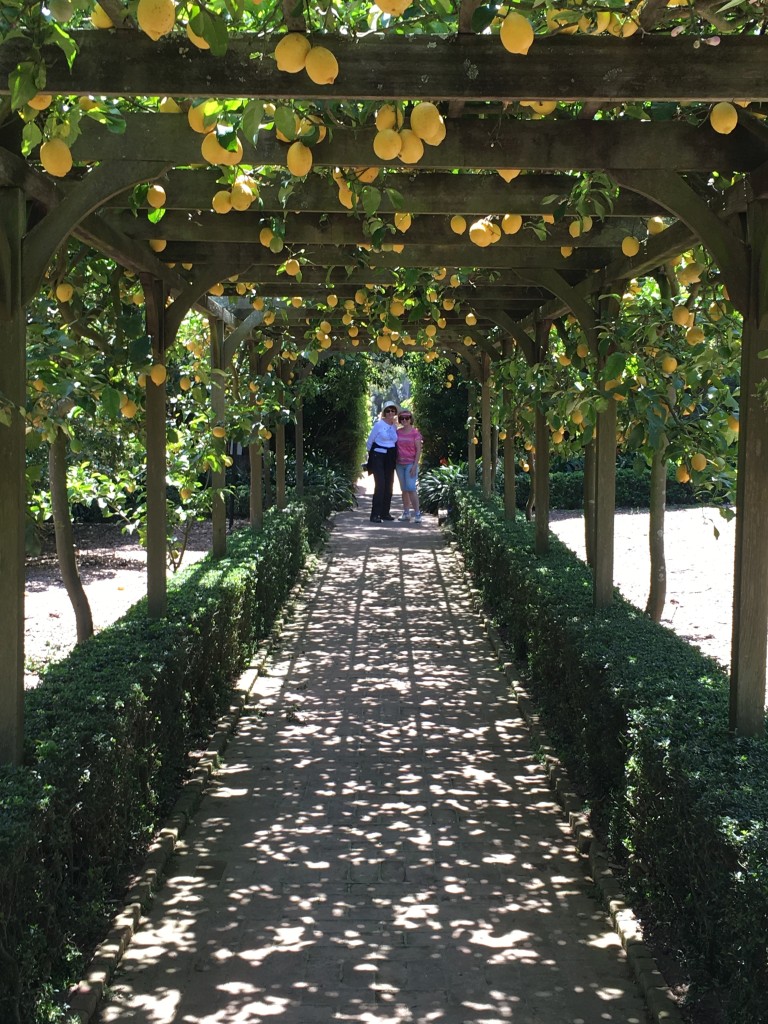 It was wonderful to see this treasure that survived both fire and (extreme) water.

Fire helps maintain a healthy forest. It clears dead wood and undergrowth making way for younger vegetation. However, the risks wildfires pose to people and property is growing, as these once largely uninhabited areas become more populated. Warren Cromwell, writing for National Geographic says, “Unlike remote parts of the world where natural events like lightning strikes are prime sources of wildfires, in southern California, such fires are almost always started by people. Ninety-five percent have a human cause, according to Cal Fire, the state’s firefighting agency.”

What started this chain of events of December/January 2017-18? Hinting at a human event triggering the Thomas fire, several lawsuits have been filed since January alleging the fire started with the failure of Southern California Edison’s electrical equipment: humans. This was coupled with extreme drought; abnormally high, sustaining Santa Ana winds; and rain, that under pre-fire conditions would have been absorbed by the vegetation.

What happened in those two months can only be described as a perfect storm – “a detrimental or calamitous situation or event arising from the powerful combined effect of a unique set of circumstances.”