Only 125 miles separates Crystal Cove State Park and Anza-Borrego Desert State Park in southern California. But, on a visit with friends in April 2018, I found the two parks to be worlds apart.

Crystal Cove State Park is located along the Pacific Coast Highway (PCH) between Newport Beach and Laguna Beach. It consists of over 3 miles of beach and 2,400 acres of backcountry wilderness, where trails through the canyons can be found. The offshore waters are designated as an underwater park. The Crystal Cove Conservancy has restored many of the 1930s beach cottages in the historic district. We limited ourselves to the historic district and the long stretch of beach – saving the backcountry for another time. 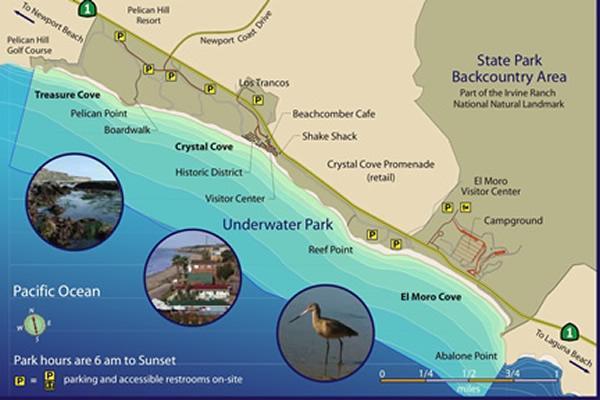 We arrived at the park mid-morning. A 1/2 mile walk down a paved path took us to a tunnel under the PCH that led to the historic district. The walls were adorned with Earth Day art. 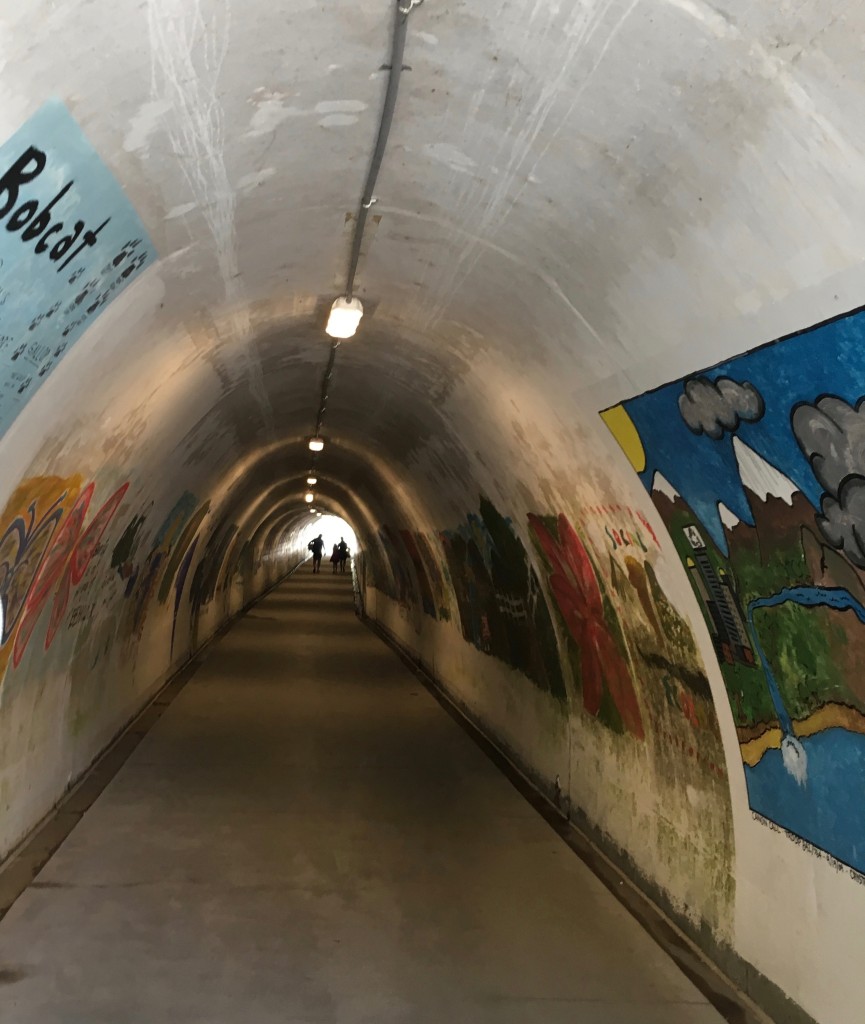 As we entered the historical district, we stopped at a marker, which read: “The early to mid-twentieth century cottages in this last self-contained southern California beachfront recreational community reflect a unique vernacular architectural design emblematic of ‘architecture without architects’.”

The cottages that remain were part of a seaside colony built between 1920 and 1940. During the years, they’ve served as homes, beach getaways and movie backdrops. The “vernacular architecture” refers to the manner in which many of them were thrown together – from jetsam and flotsam found at the shore; garage sales items and materials leftover from movie shoots, etc. The vintage cottages were favorites of people who loved the bohemian feel of the beach colony

In 1979, the state purchased the 3,000-acre Crystal Cove area. The cottages were occupied by families until 2001, when the state evicted them to make way for public lodging. Many have now been renovated and are used as rentals – to get one, reservations must be made six months in advance!

Below are (1) some of the cottages yet to be renovated and (2) Cottage #13, used as a set for the Bette Midler film, Beaches. 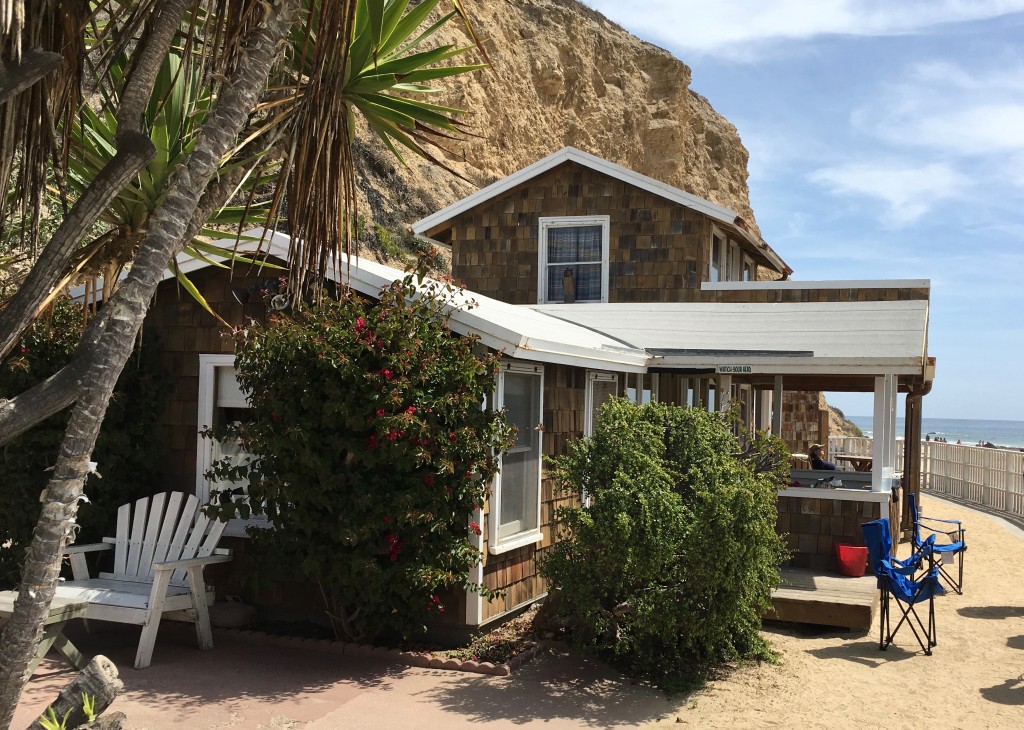 We spent the next 3 1/2 hours walking along the seashore – an absolutely perfect day: none of the usual sea fog; clear & sunny; temperature in the 70s and, unlike Florida, no humidity! A few photos along the way… 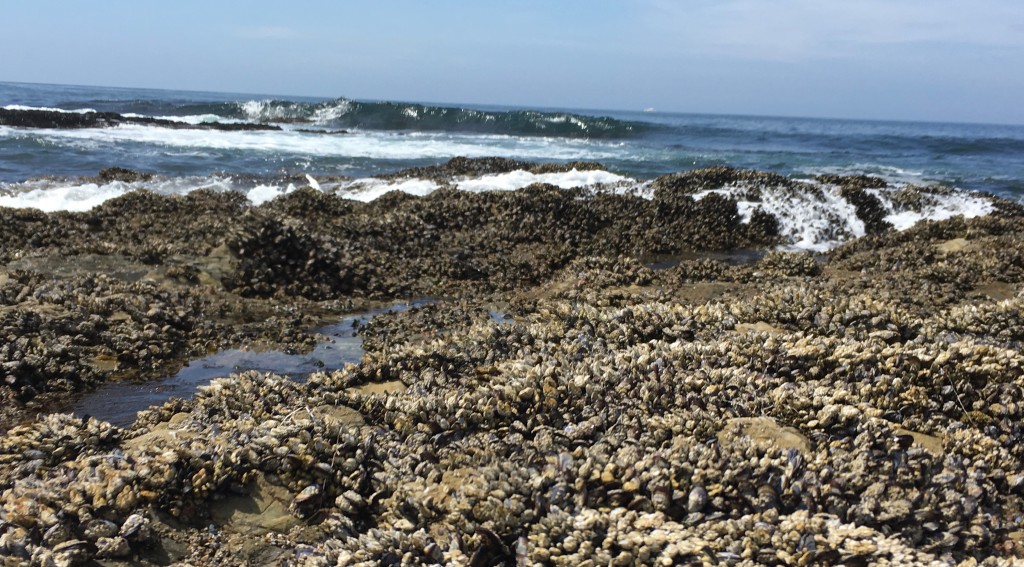 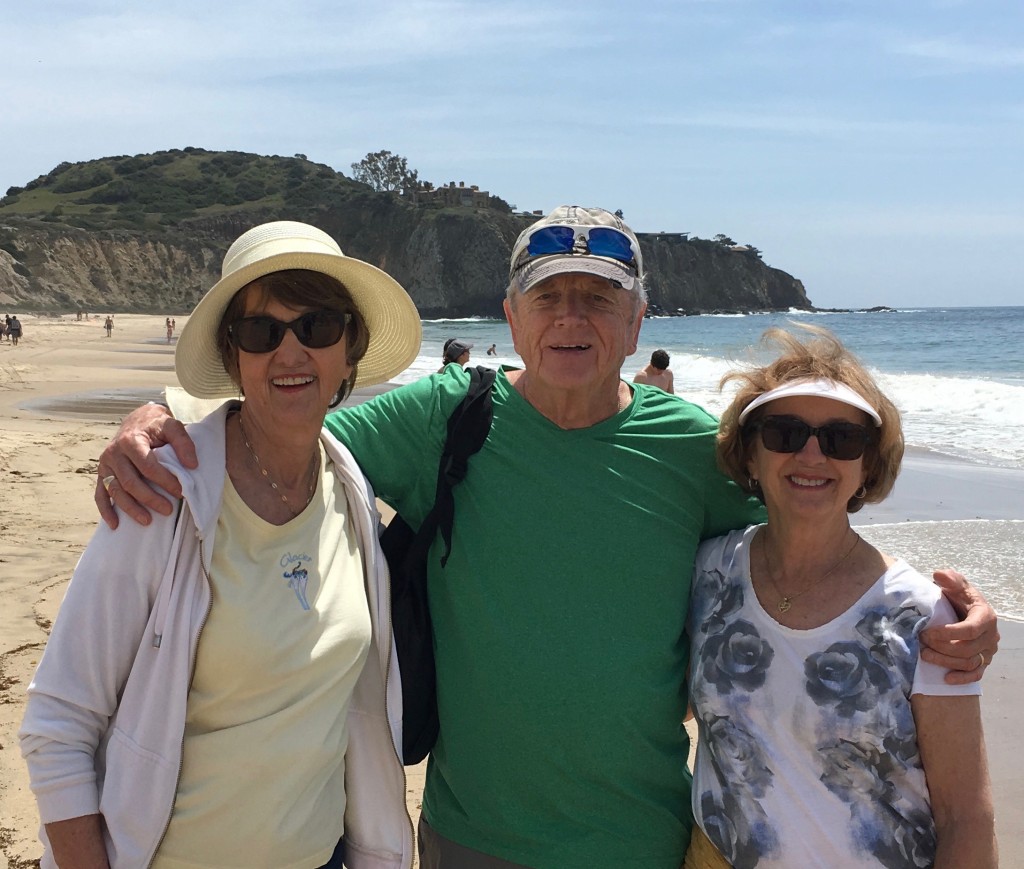 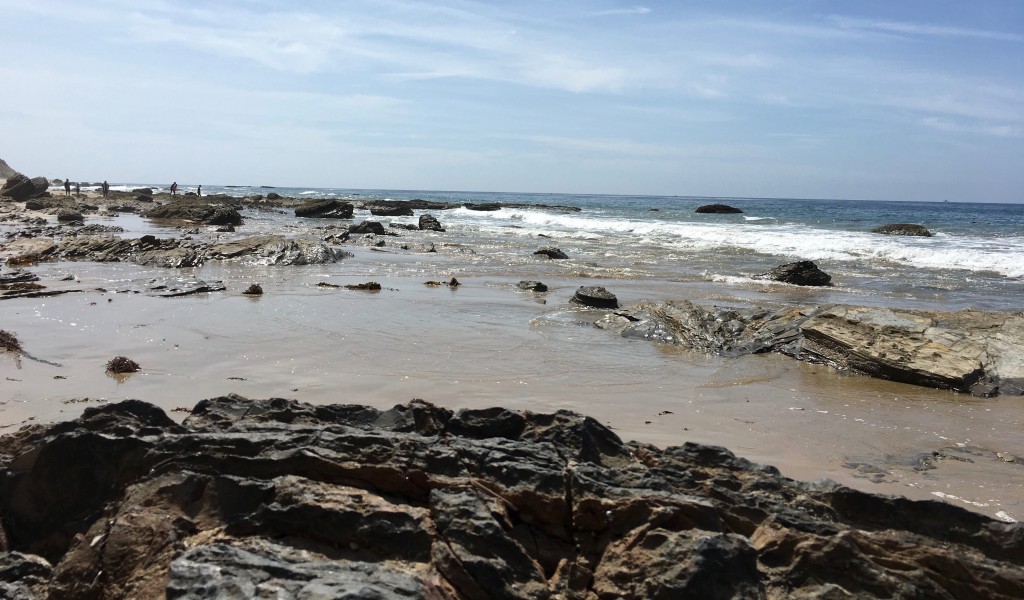 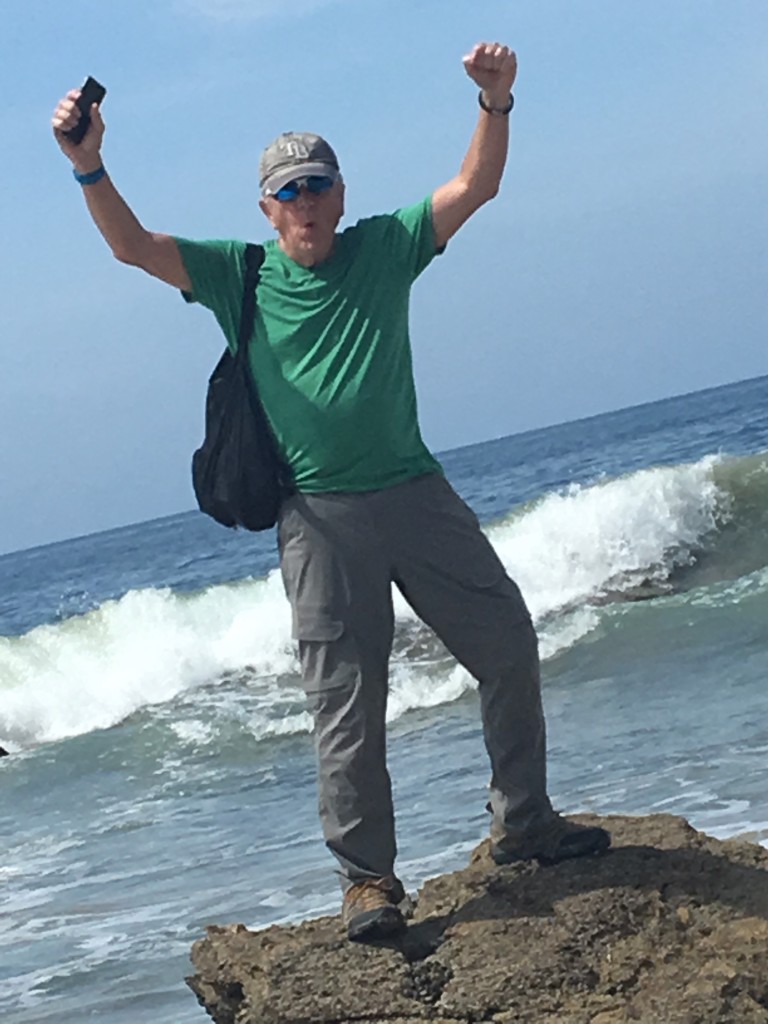 It’s almost 3:00, time for lunch! We head up the wooden stairs to the Shake Shack on the Pacific Coast Highway! 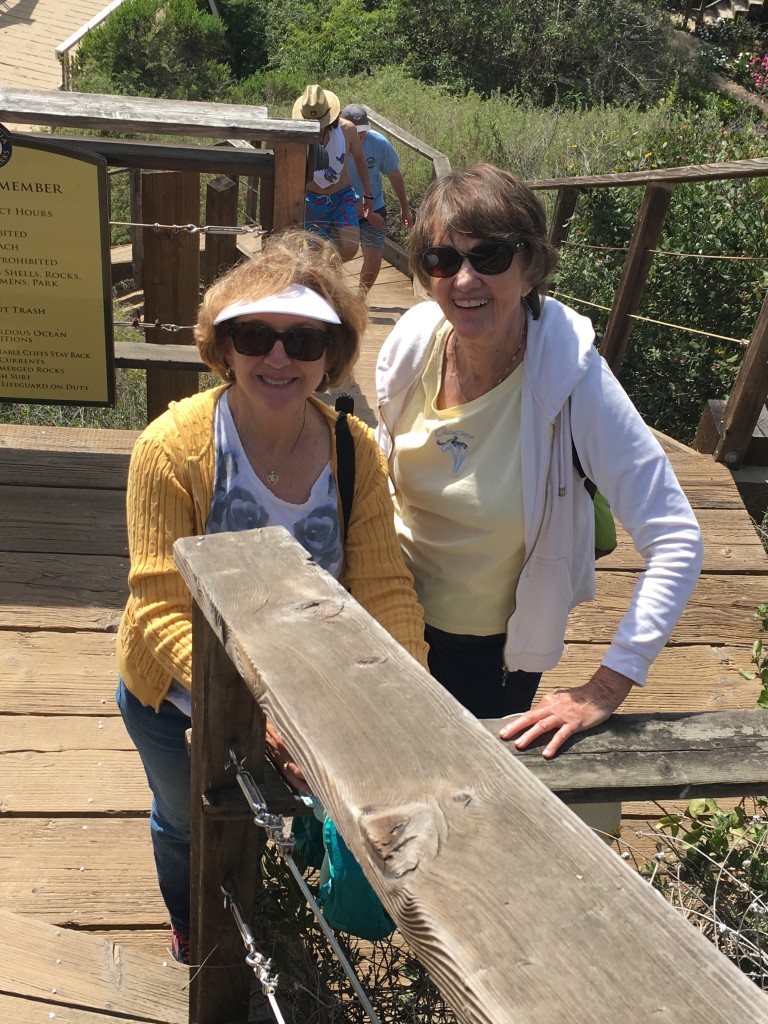 A pretty popular place! A long line at the counter and not much of a parking area – glad we could walk up! That hamburger sure hit the spot! 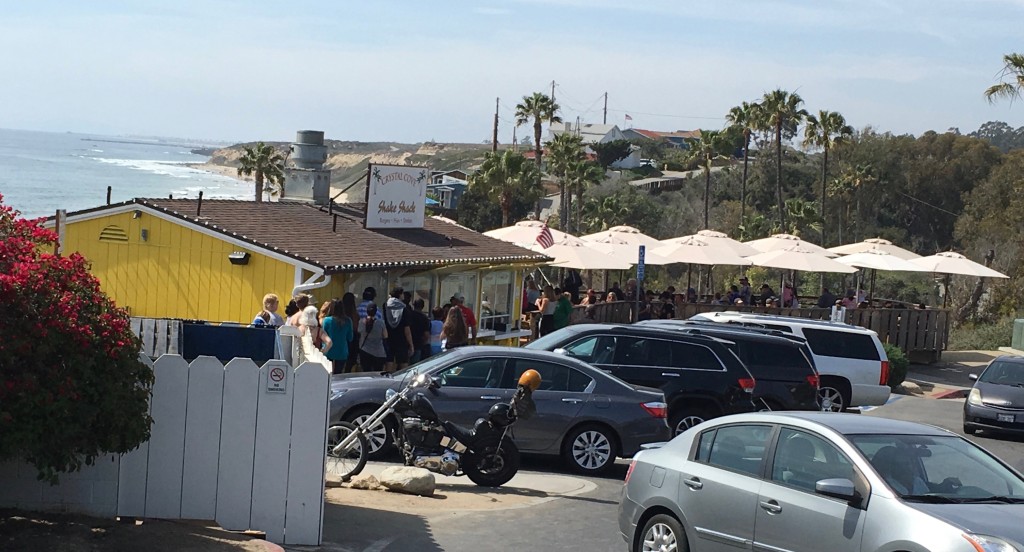 After lunch, we retrace our steps through the tunnel and head for the car. What a great day!

For more info on this unique place, check out an article by Hadley Mears of KCET about life through the years in the cove: A Return to Eden.

From the hills just east, we get our first glimpse of the park and, in the distance, the town of Borrego Springs. In less than an hour and a half, we traveled from the mountains at the Palomar Observatory (elevation 6,000′, temperature 50’s) to the desert (elevation near sea level, temperature 80’s).

Borrego Springs, population 3,500, is the only town in California completely surrounded by a state park. It’s also an official International Dark Sky Community, dedicated to protecting the night sky from light pollution. It was late afternoon when we arrived at the Borrego Springs Resort, our base camp for two nights.

We settled into our accommodations; shared some wine, cheese and leftover pizza and waited for nightfall. In the dark, we traveled maybe a mile to an isolated spot in the park to check out the skies. We weren’t disappointed! A clear, cool and quiet night provided us a great view of the heavenly and manmade bodies in the sky. We used a couple different apps on our phones to identify many of them. Astronaut Kalpana Chawla, who lost her life in the Columbia disaster, said, “When you look at the stars and the galaxy, you feel that you are not just from any particular piece of land, but from the solar system.”

We were reluctant to leave this special spot, but the next day we’d need to get a relatively early start to avoid the punishing heat as much as possible.

We were met by a Trailhead Volunteer who told us of the conditions on the trail and to ensure that we had an adequate supply of water – he had cases of it stacked up for anyone who came unprepared. The posted heat warning recommended not to hike from 10am to 4pm, April to September. It was early April and we planned a slow pace on the 3-mile loop trail. So off we went.

We climb up the trail through the canyon winding through a dry wash. Mostly solid underfoot, we are required to either dodge or climb over some boulders.

A sign along the trail reads in part, “While most of the valley is in the rain shadow of the mountains on the park’s western border, this canyon receives “spillover rain” that just barely makes it over the mountain peaks. When that rain is intense, floods become a powerful force.” In 2004 floodwaters swept through this canyon. Fourteen years later, logs remain as evidence of the destruction caused by the water’s force.

We gave this guy wide berth as he crossed the trail right in front of us! 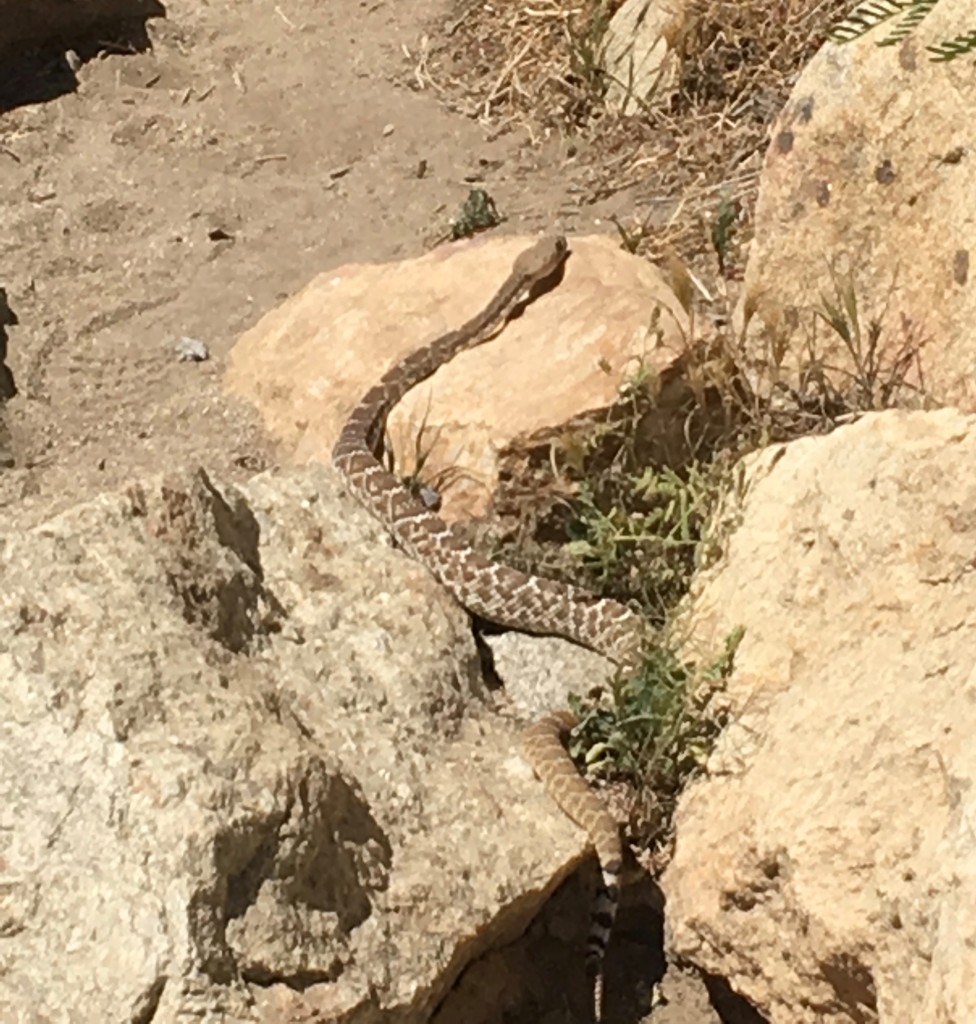 We stayed with our plan to take a slow approach to this hike. At just three miles, it sounds like it should have been just “a walk in the park” (pun intended)! We were very conscience of the heat, reminding each other to drink, drink, drink. It became a bit more dicey underfoot as we approached the halfway, turnaround point. There was also a 600ft elevation gain on the front half. Very little shade was available, so we took every advantage we found – here under and overhang. 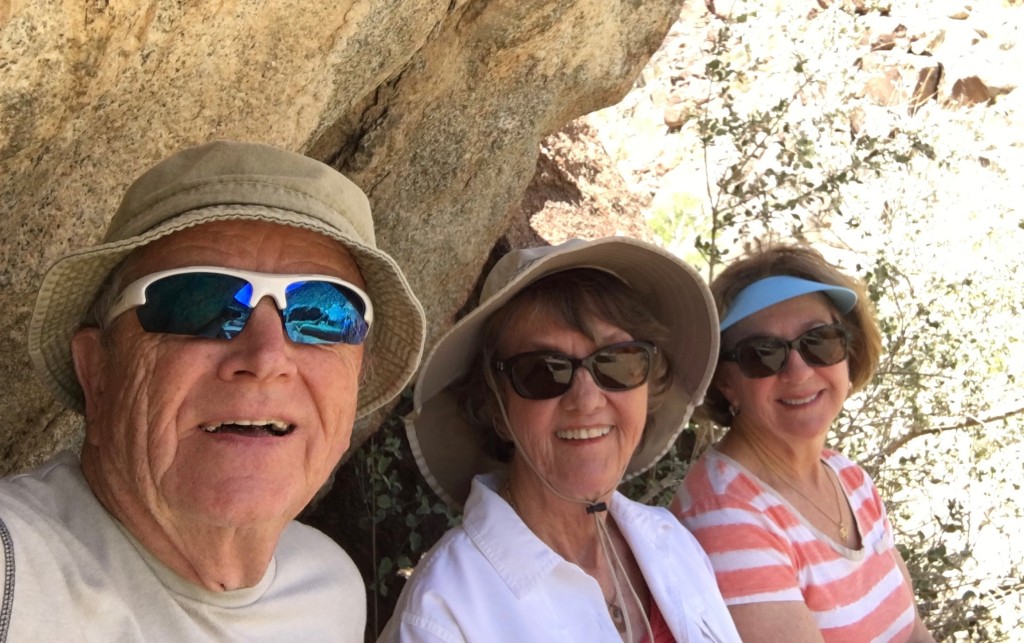 I’ve never seen a real desert oasis. I’m only familiar with the cartoon versions of a palm tree or two and maybe a camel taking a drink from a small puddle. 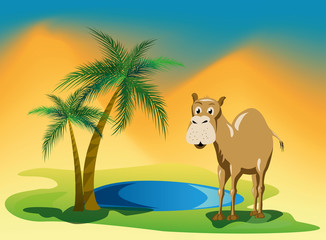 At the halfway turnaround point in the hike, we encounter an oasis! There are certainly more spectacular examples in many parts of the world, however I was impressed with this relatively small one. 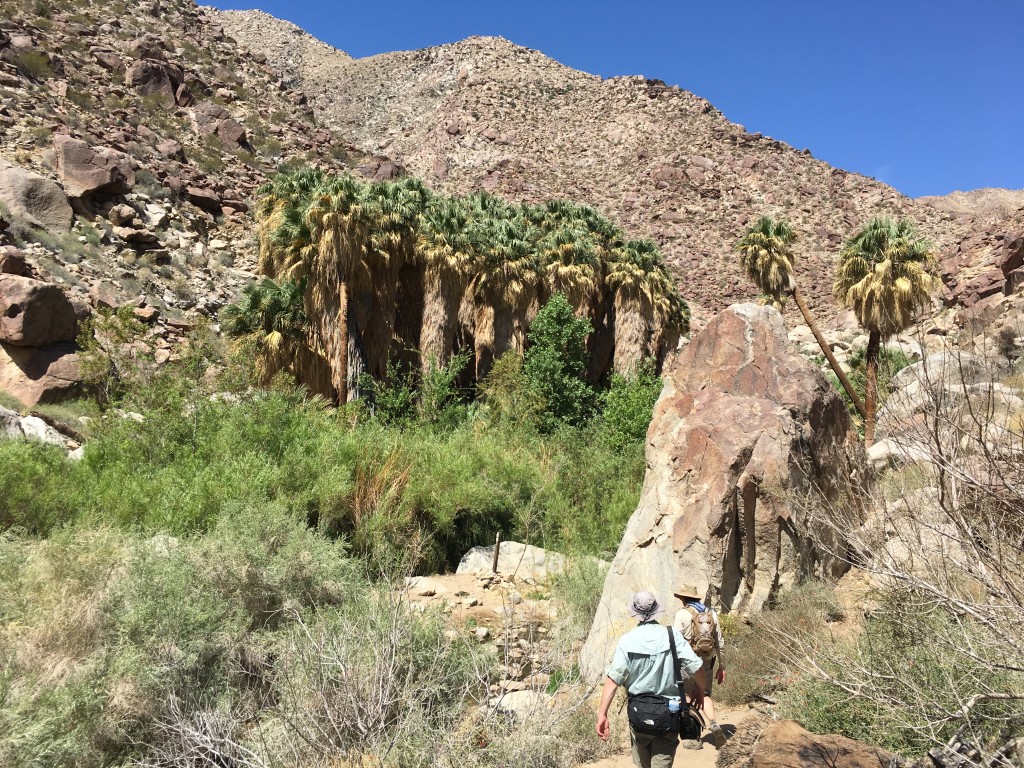 Towering California fan palms at the oasis. These are the only palms native to California and are relatively rare in the wild. Reaching 60 feet in height, this species is the largest palm in the state. The “skirt” of brown dead fronds provides habitat for birds, bats and insects. Not accustomed to seeing un-pruned palms here in Florida! 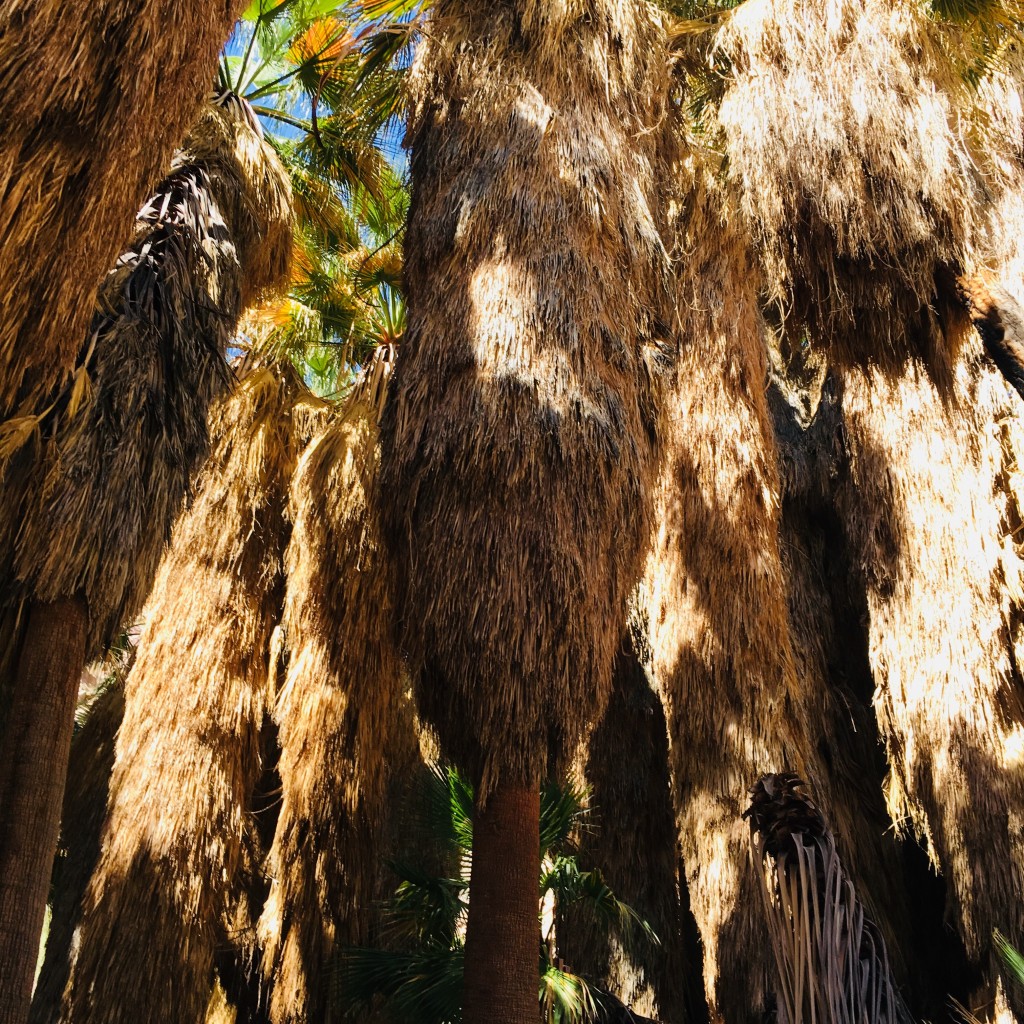 At the oasis, there is a wonderful, cool, shaded area in among the towering palms and boulders. It felt as though I’d come into an air-conditioned room! 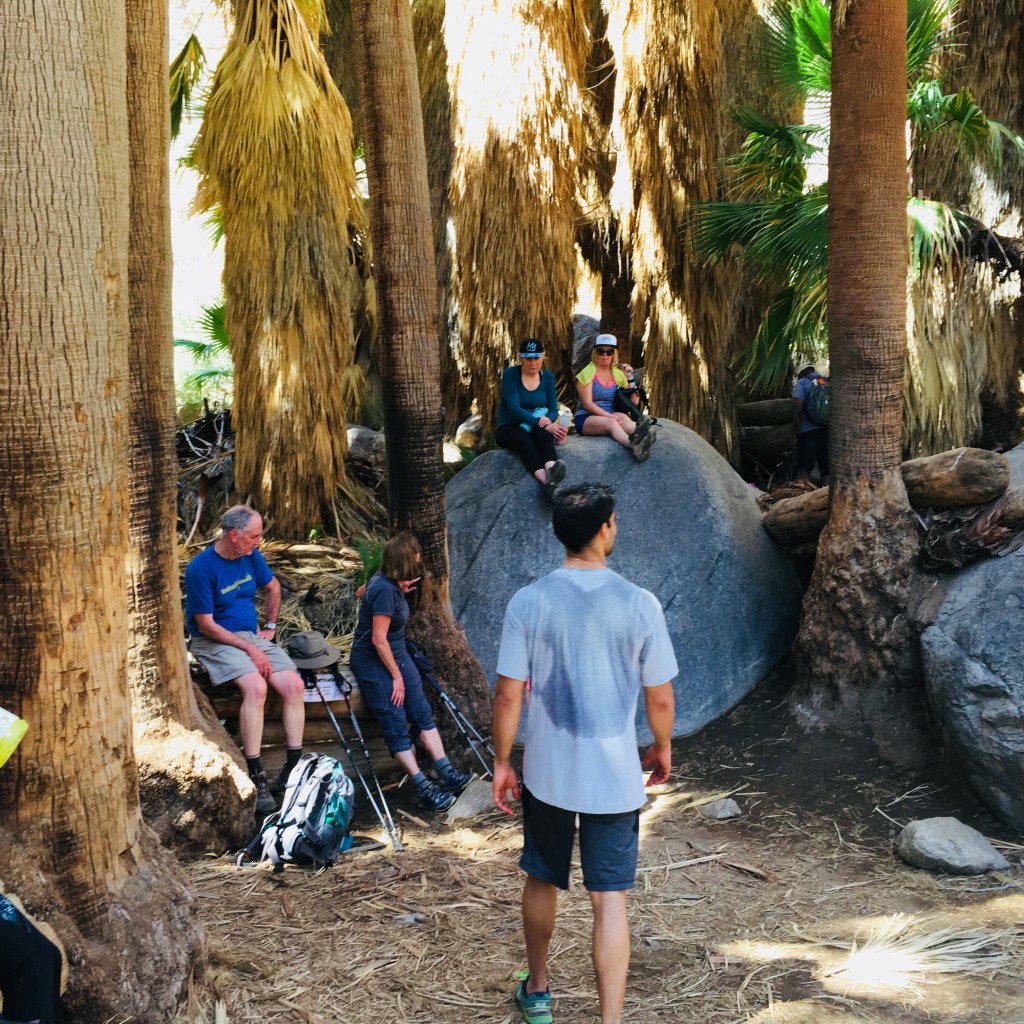 The oasis’ water comes from a natural aquifer deep below the surface. Folks were frolicking in this shallow, gravel-bottomed pool of water. For an instant, I’m not in the desert! 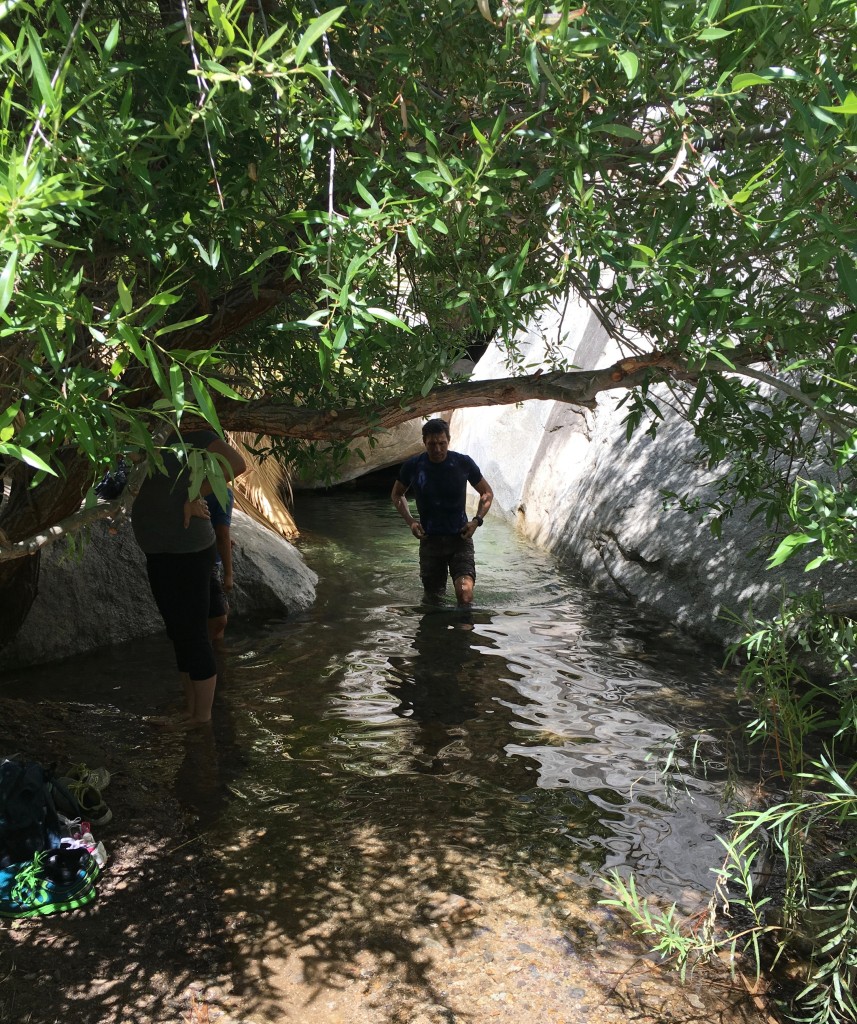 Mark Jorgensen writing in the DesertUSA Newsletter: “Anza-Borrego is one of the last refuges of the Peninsular Bighorn Sheep. Only 280 of this subspecies remain in the United States and 200 find refuge in the park. Anza-Borrego is important to the Bighorn when you consider the explosive metropolitan growth of Southern California.” We were so fortunate to see three of these animals (two adults and a yearling) on our return descent, this one feeding on a bush. 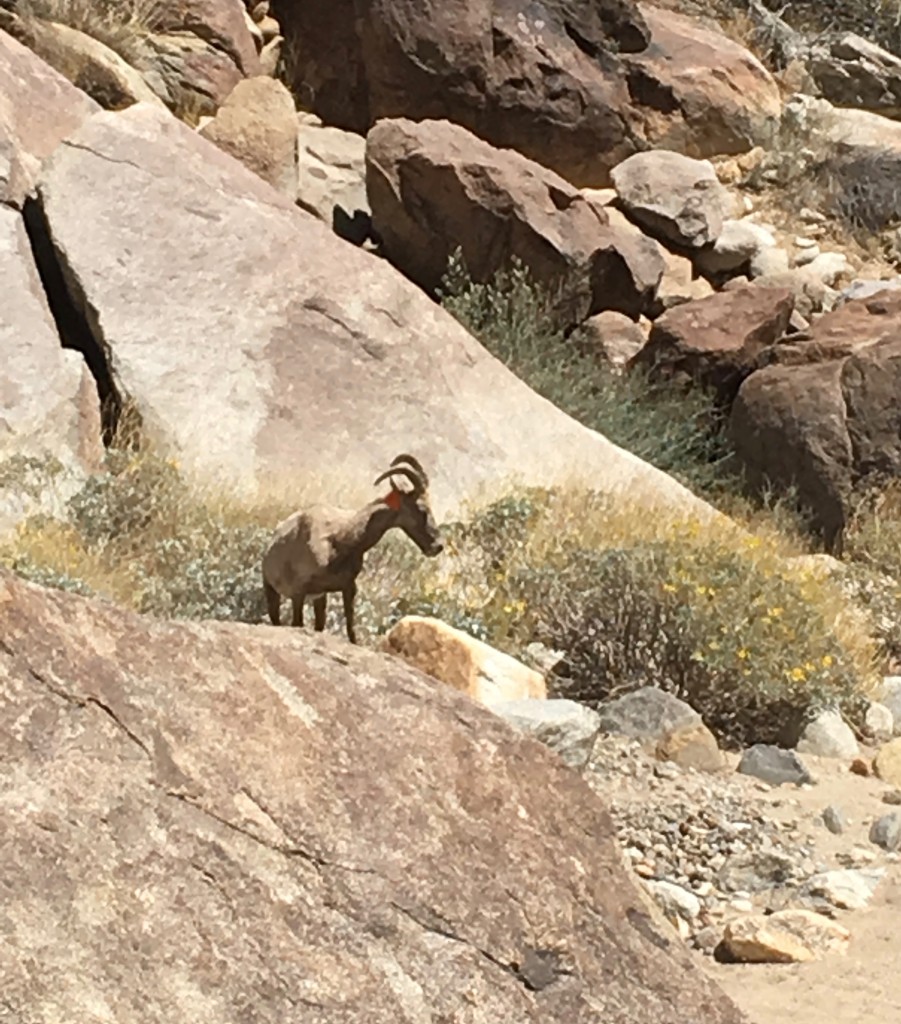 We saw several varieties of cacti – Cholla, Ocotillo, Barrel, Beavertail, but no Saguaro (the tree-like cactus that develops arms as it ages). When we lived in Arizona, they seemed to be everywhere. Although they are prevalent in the Arizona and Mexican portions of the Sonoran, very few exist in California. The angle of the sun on this Cholla made for an interesting shot. 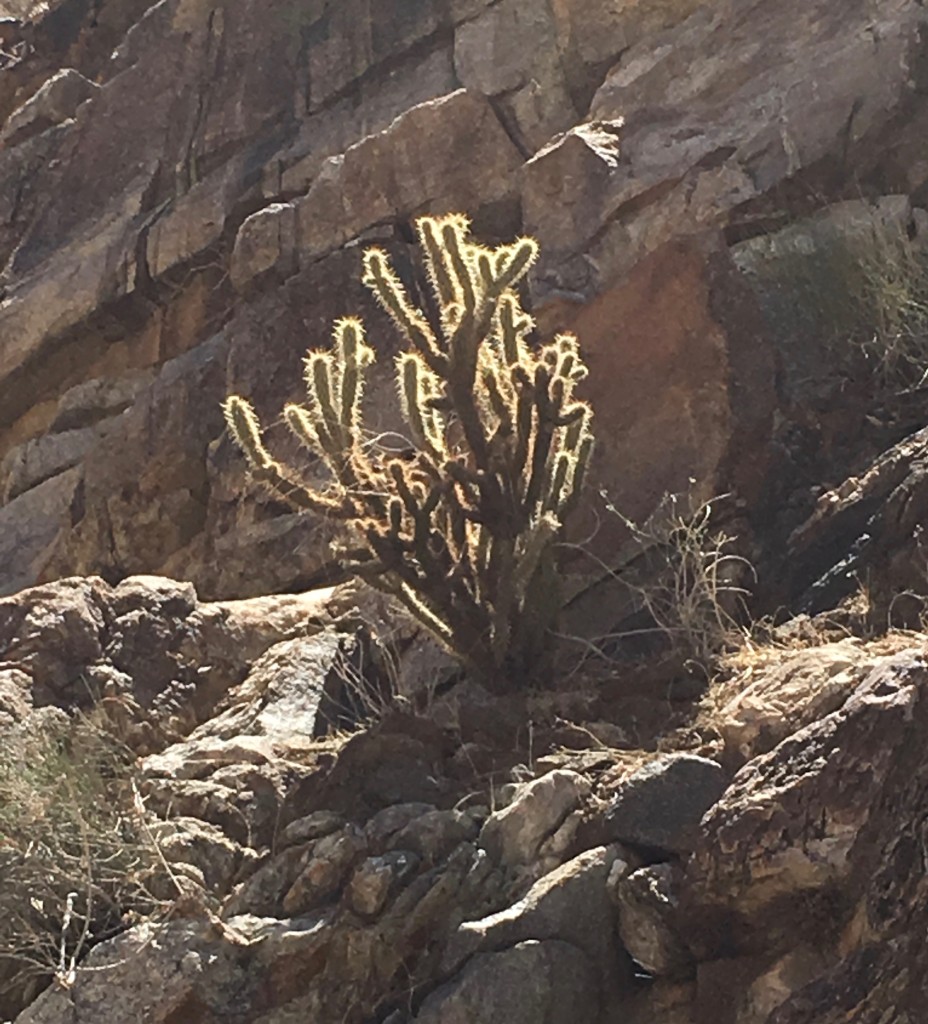 We returned to the trailhead almost exactly three hours after departing on this journey – we’d averaged an hour per mile! Taking it slow and easy allowed us to finish with no injuries or dehydration – and to take in the beauty of this place. Time for some ice cream at Bighorn Fudge Company!

After the refreshing ice cream break, we visited the Galleta Meadows portion of the park. This quirky sculpture garden in the desert contains over 130 steel-welded sculptures. Dennis Avery (heir to the Avery Labels fortune) commissioned artist/welder Ricardo Breceda to create these fanciful figures on his property. 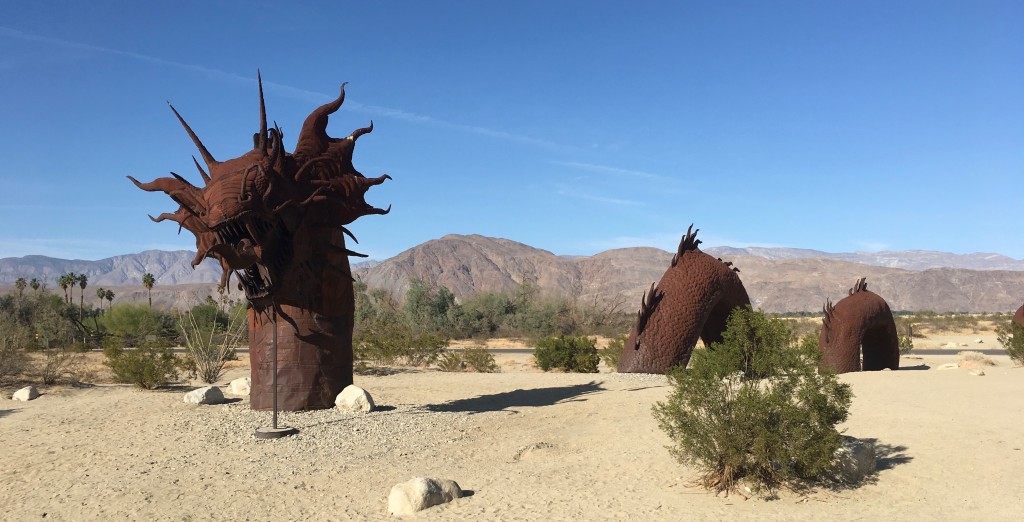 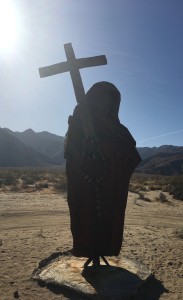 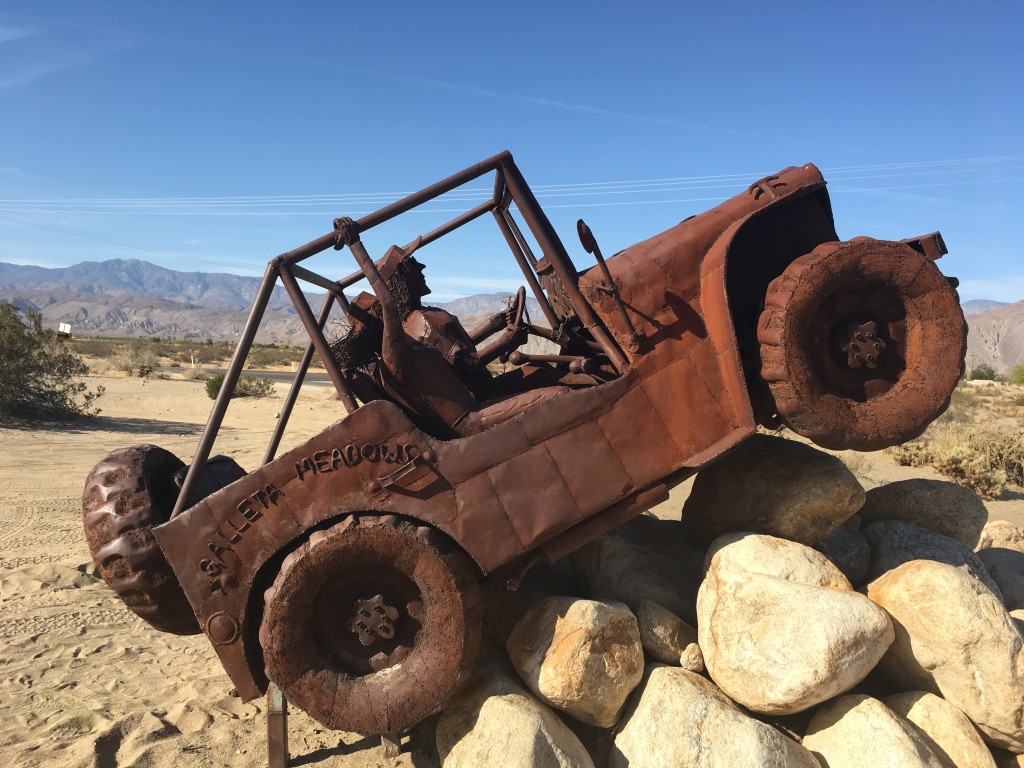 Before leaving this desert wonderland, we traveled through the Borrego Badlands, an area on the eastern edge of the park. To really get a true sense of the beauty of the place required an off-road, 4-wheel drive vehicle – something like that Breceda jeep in the picture above. We were content to stay on the hard surface of the road. In a very small way, I was reminded of the hoodoos (tall skinny spires of rock) we saw in Brice Canyon National Park a few years ago. 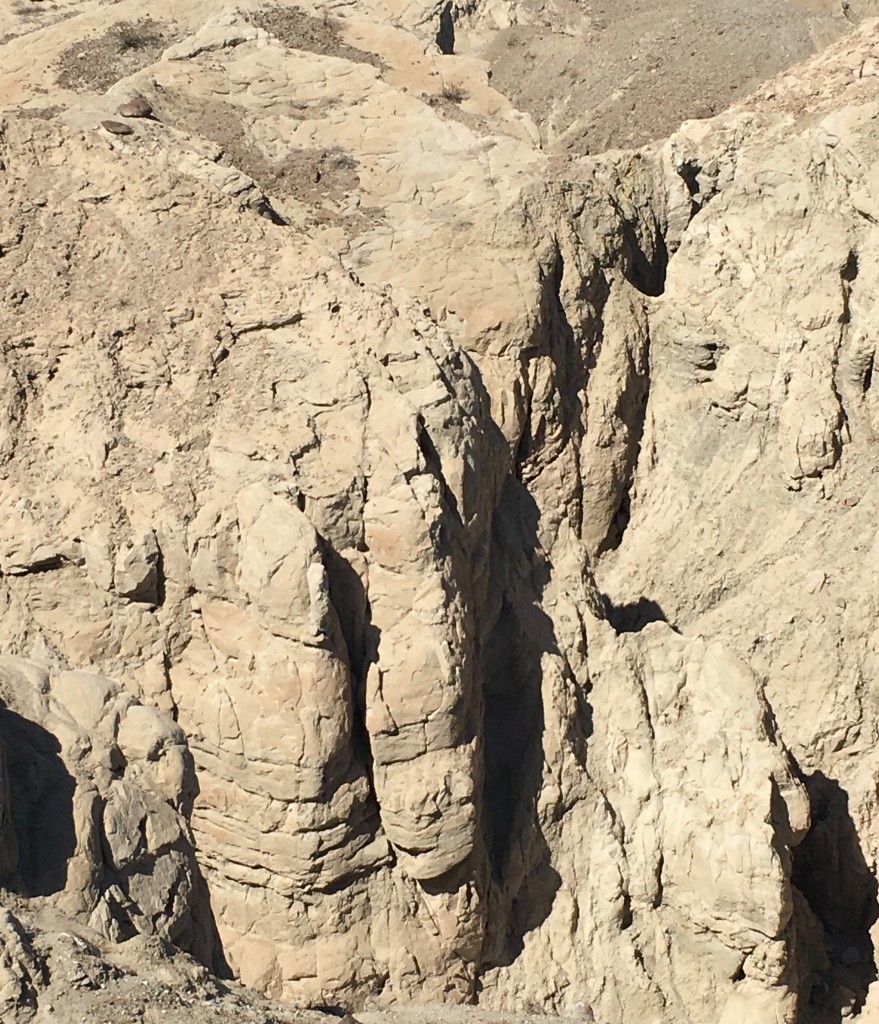 The Salton Sea can be seen in the in the far distance. [Salton Sea: I plan future post about my visit to this sad piece of California history]

Two very different state parks: Crystal Cove, a gem along the Pacific coast with an interesting bohemian past; Anza-Borrego, a large swath of land preserved for all to enjoy the beauty of this living desert.

Over the next year, I’m determined to visit as many of Florida’s 175 award-winning state parks, state trails and historic sites as I can. Stay tuned!