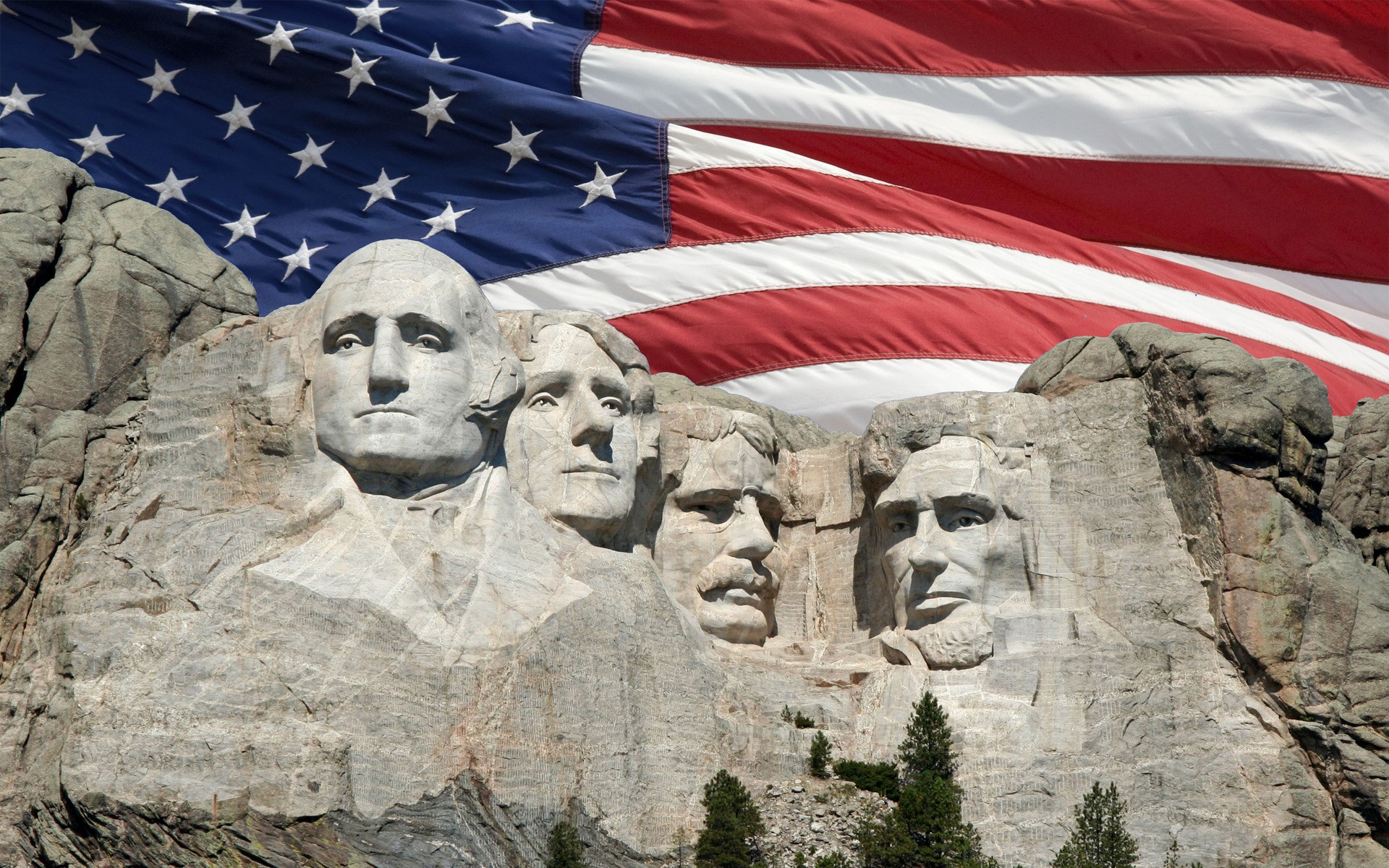 I was born and raised in Quincy, Massachusetts. First settled in 1625, my hometown is known as the “City of Presidents” as both Presidents John and John Quincy Adams were born there as well as John Hancock, President of the Continental Congress. The Adamses have no libraries you can visit. As a matter of fact, neither do any of those men memorialized on Mt. Rushmore: Washington, Jefferson, T. Roosevelt nor Lincoln [although the state of Illinois dedicated one to Lincoln in 2005] . The concept of the Presidential Library is fairly new, starting with FDR who built a relatively simple one in Hyde Park, NY.

While living in Atlanta in the 1980’s, we visited the newly-completed Carter Library. I don’t want to get political here, but I admired the man’s intellect, humbleness and military service; however, I didn’t feel Carter was an effective president. The Library seemed to be a vehicle to carefully craft a vision of how he wished to be seen. Not surprisingly, I’ve come to learn that’s pretty much how it is with all of the presidential libraries: highlight the accomplishments and downplay the negatives.

With that thought in mind, while in California recently, I jumped at the opportunity to visit the Reagan Library and Museum in Simi Valley!

Greeting us at the door, was the man himself. 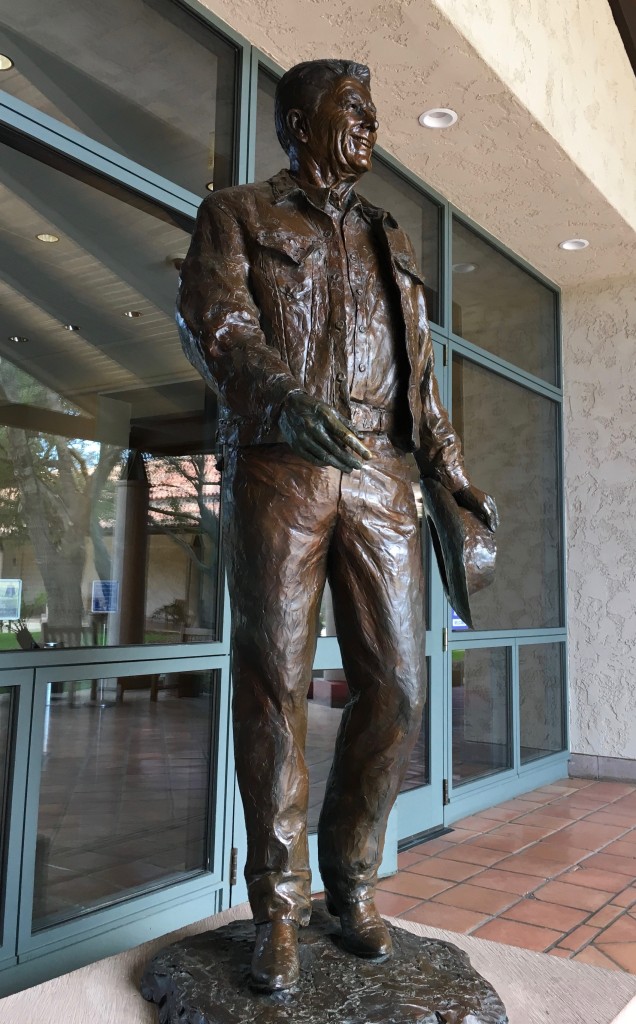 The Library and Museum’s landscaped grounds occupy 100 acres on a mountaintop, with stunning views of the mountains, valleys and the Pacific Ocean below.

The low-lying Spanish Mission-style structure sits perfectly atop the hill. It wasn’t particularly crowded the day we were there – a great time to appreciate the silence and beauty of this place.

Inside, a couple of friends were waiting for us. 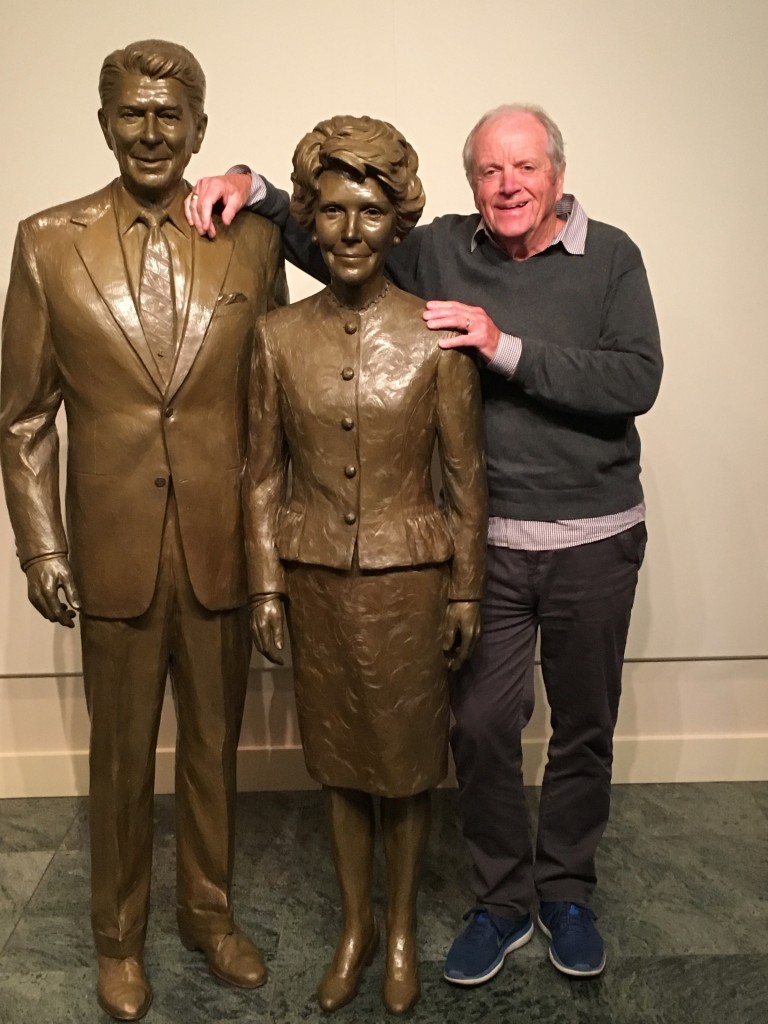 The floor plan was well designed and took us through the various stages of Reagan’s life: boyhood, college, movie career, governor and president.

Some of the highlights for me…

A replica of the Oval Office. 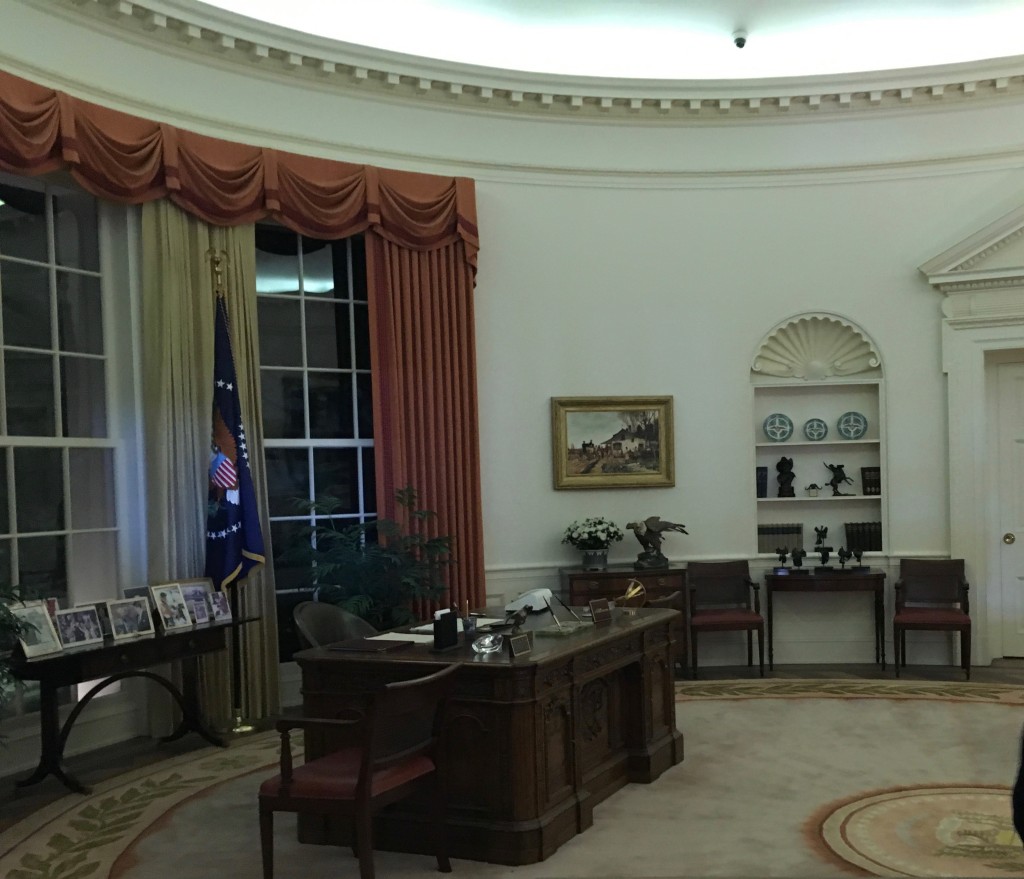 The actual letter Reagan penned in 1994 sharing with the nation his Alzheimer’s diagnosis and that he was entering “into the sunset of my life”. 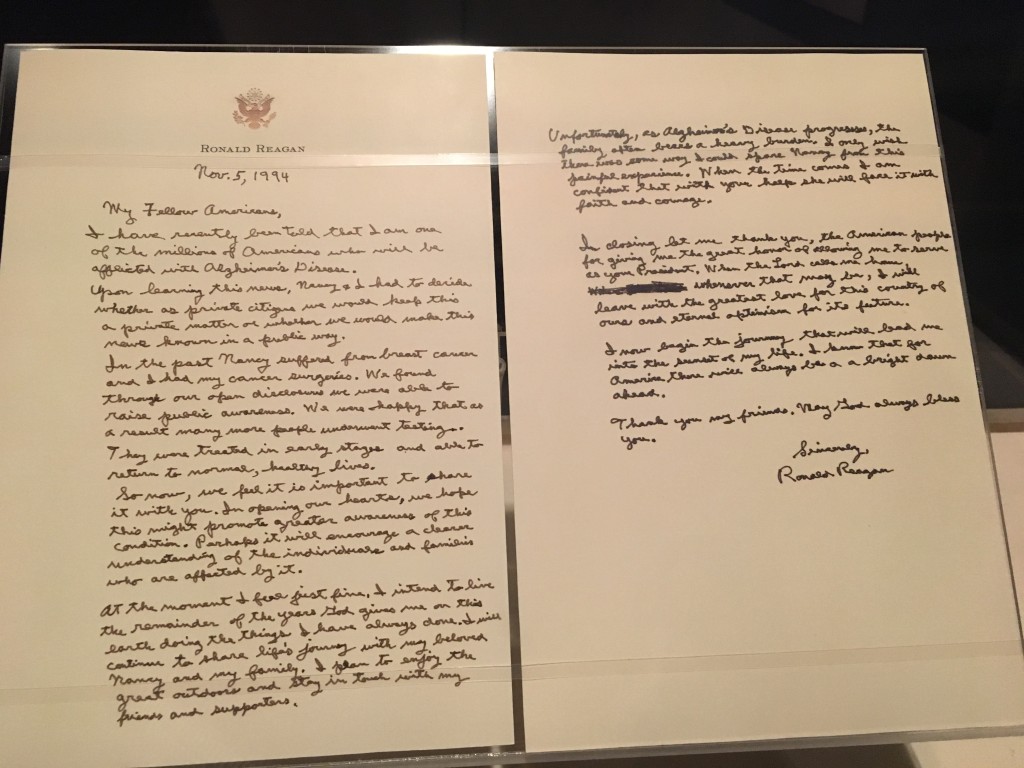 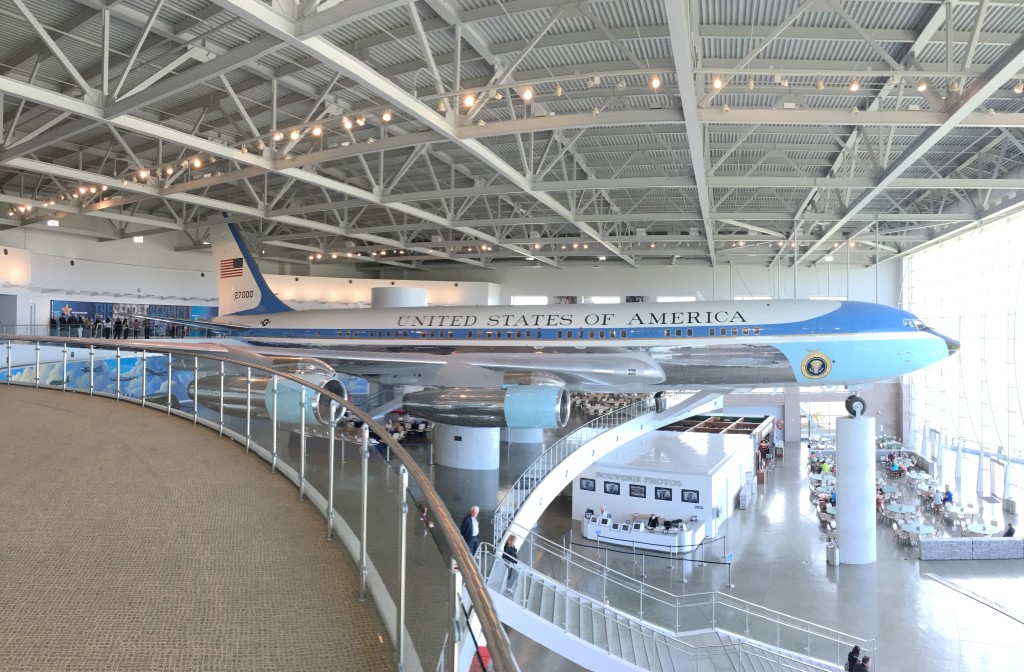 In June of 1987, at the Brandenburg Gate (that separated East and West Germany), Reagan gave a speech that famously contained the words: “Mr. Gorbachev, open this gate! Mr. Gorbachev, tear down this wall!”

While the Berlin Wall came down after he left office, it was a strategic backdrop for that speech. It’s only fitting that this giant piece of the wall sits on the terrace. 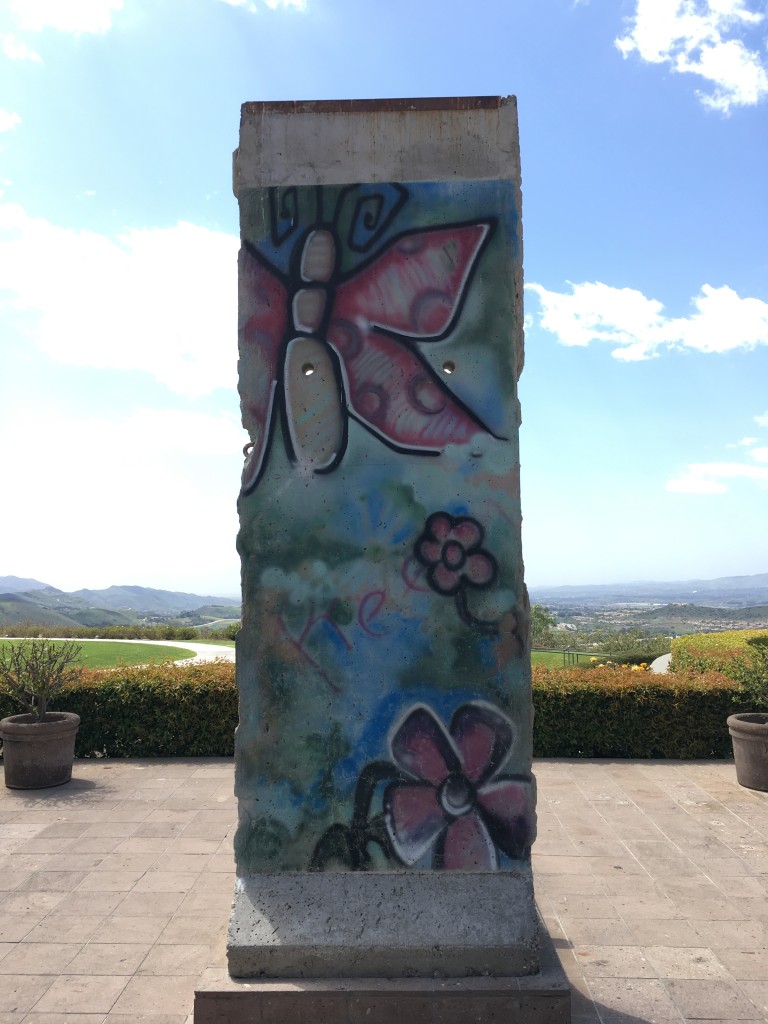 Seen in this last photo is the gravesite. Almost ten years after he wrote his goodbye letter to the nation, Ronald Reagan died in 2004. I remember the haunting image of Nancy laying her head against his casket before it was lowered into the grave. Nancy died and was buried here in 2016. 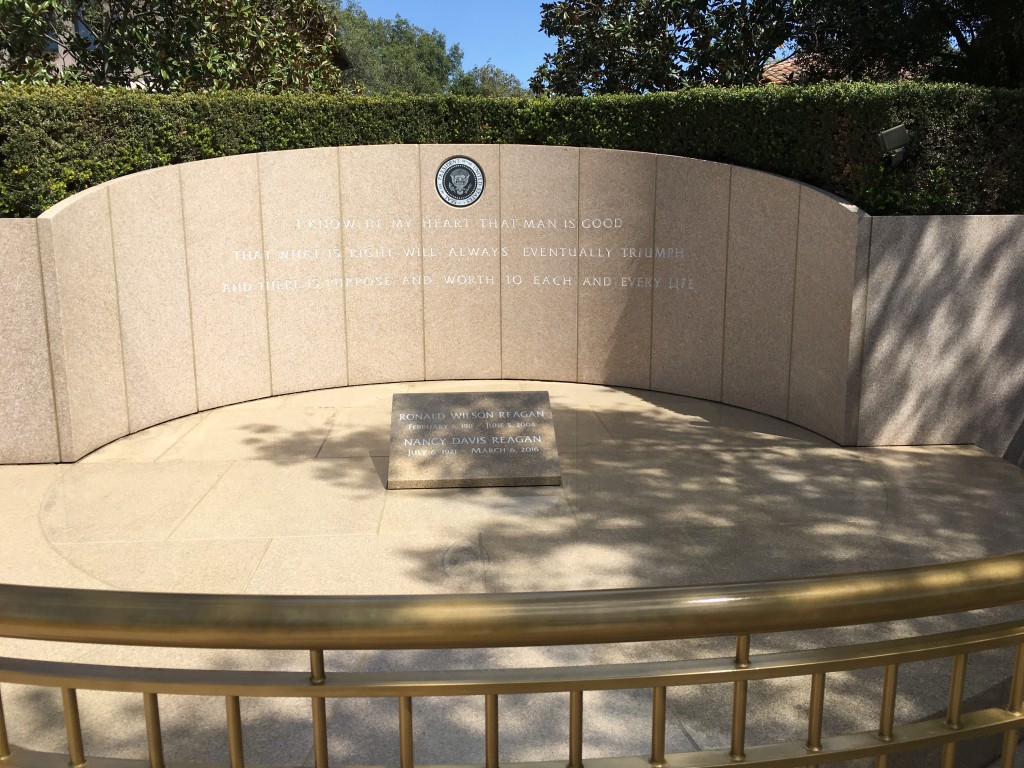 The four of us each took the visit at our own pace. I was the first to finish inside and sat outside under a tree on the terrace waiting for the others to join me. I enjoyed the serenity and beauty outside almost as much as I did the displays inside! Sounds crazy, huh? I can understand why the Reagans chose this spot for their Library and Museum.

We enjoyed a frozen yogurt at Reagan’s Country Cafe before heading back to Carpinteria. A wonderful way to spend the day!