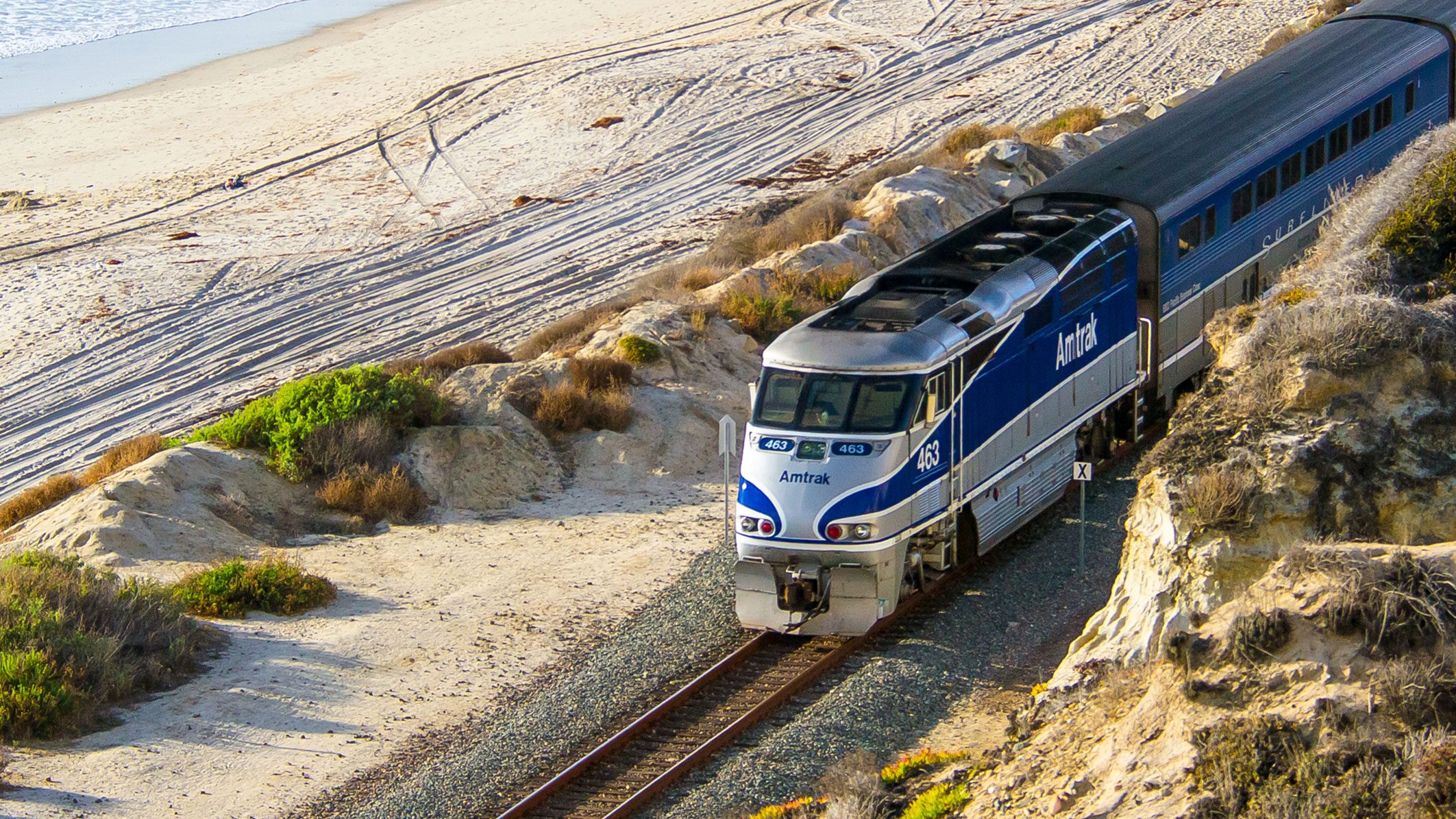 From an Amtrak brochure…

The Amtrak Pacific Surfliner route meanders along the majestic California coastline from San Luis Obispo through prime destinations such as Santa Barbara, Los Angeles, San Juan Capistrano and San Diego. Along with business and vacation travelers, cyclists and surfers are welcome on board with bikes and boards. Lose yourself and the stress of Southern California traffic while viewing breathtaking images of the panoramic coastline. Whether your journey takes you to San Luis Obispo’s sun-drenched central coast wine country, the entertainment capital of Los Angeles, the San Diego Zoo, SeaWorld or Balboa Park – Amtrak Pacific Surfliner welcomes you. 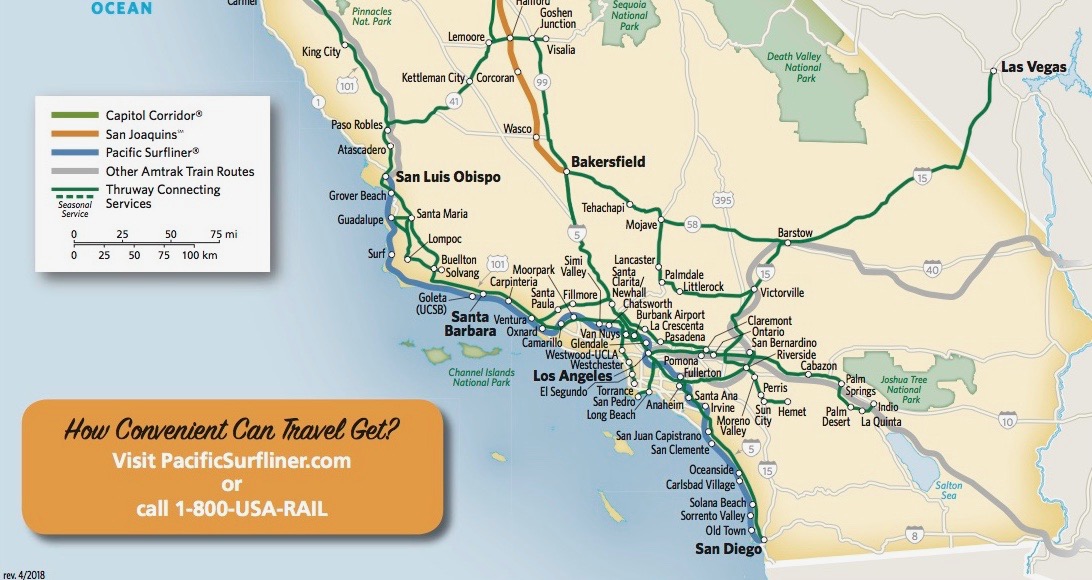 How could I not heed the call? After visiting with friends in the Santa Barbara and Orange County areas, I decided to return to Tampa by way of San Diego, a city I’d not seen since the mid-60s. It would add an extra day, but so be it! I opted to pay $20 extra for a business class seat, which offered more legroom, drinks, snacks and, what I hoped would be, a less crowded car.

My friends dropped me off at the platform about a half hour before my scheduled 7:04am departure. 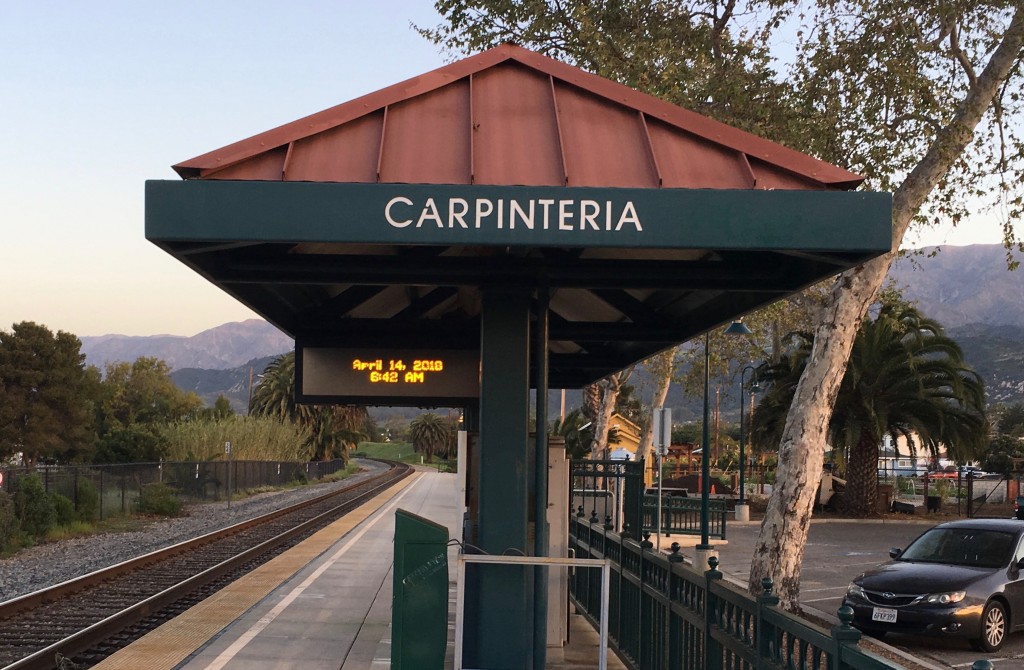 They returned at bit before 7:00 with coffee and doughnuts! The train arrived just about as scheduled – a great send-off! 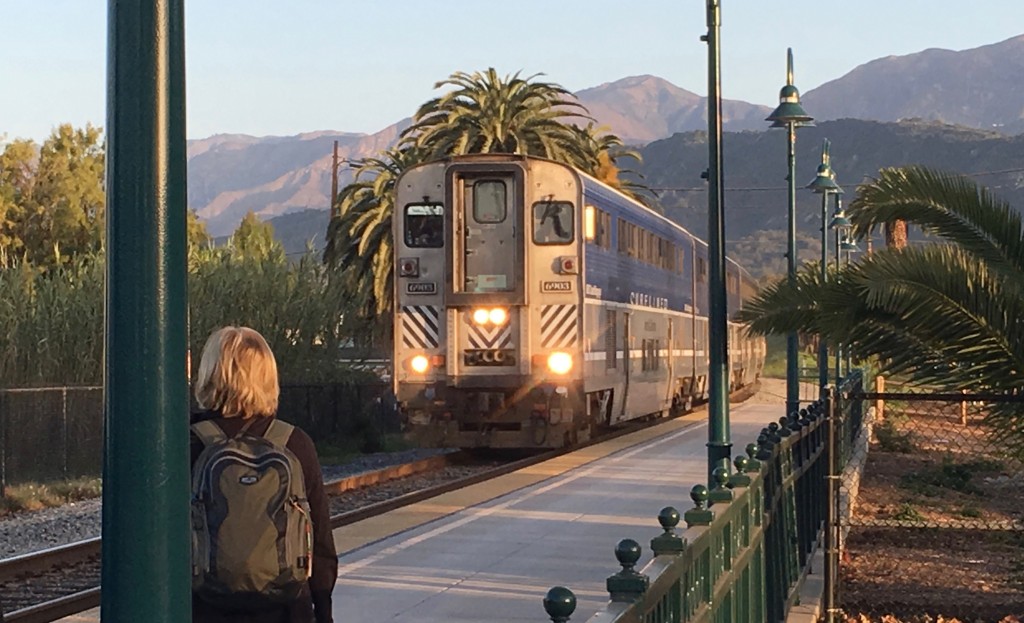 Between the beginning of the line (San Luis Obispo) until Los Angeles, the engine was in the rear – actually “pushing” the cars down the track. It came out of the Los Angeles station with the engine “pulling” the cars to San Diego.

As I expected, there were plenty of open seats when I boarded. I settled into a window seat, the aisle seat remained open until later down the line. Ventura, from whose harbor we ferried to Channel Islands National Park a few days pervious, was the first stop.

At Camarillo, we headed inland for several stops. Among them was Simi Valley, the site of the Reagan Library we had visited earlier in the week. We were at the Los Angeles station for about 20 minutes, the longest of any of the stops – and the stop with the most passengers boarding, however my aisle seat remained vacant!

As we headed into San Juan Capistrano, we were back on the coast.

Starting in the mid-1700s, Spain built a series of twenty-one Roman Catholic missions in California – from San Diego in the south to Sonoma in the north. Read more about the missions by clicking here.

While in Orange County the previous week, we visited the Mission at San Juan Capistrano. This mission was immortalized in the 1940s song “When the Swallows Come Back to Capistrano“, recorded by several artists over the years. We didn’t see any swallows, but did see a couple of nests. Below are a few photos from our visit. 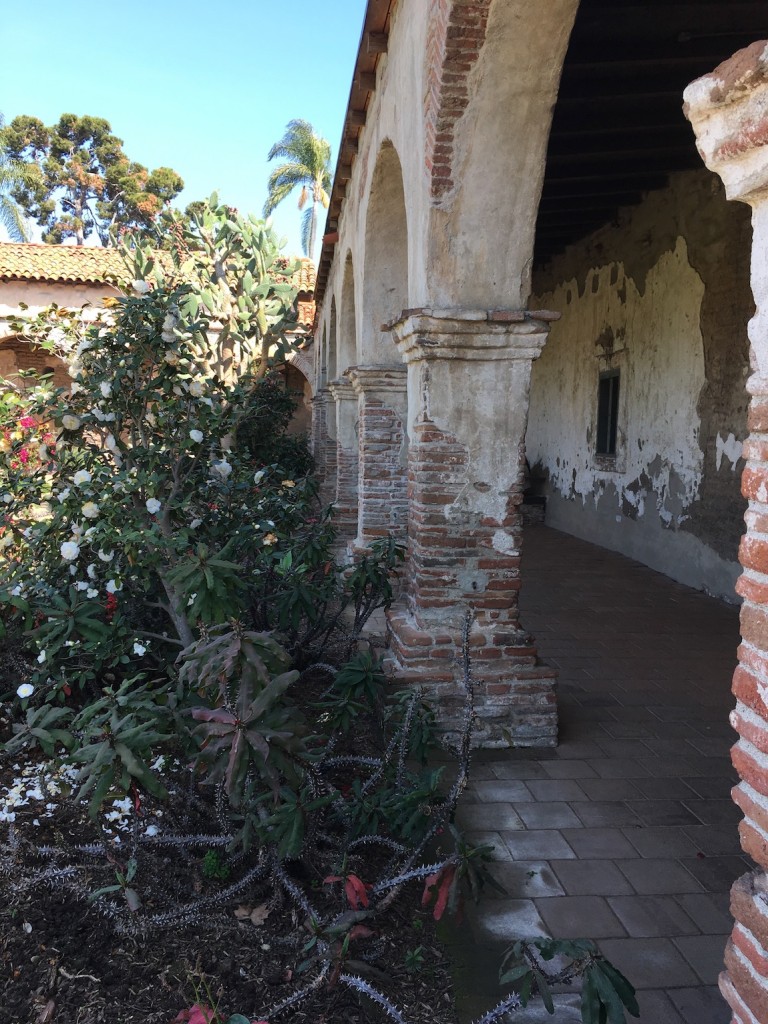 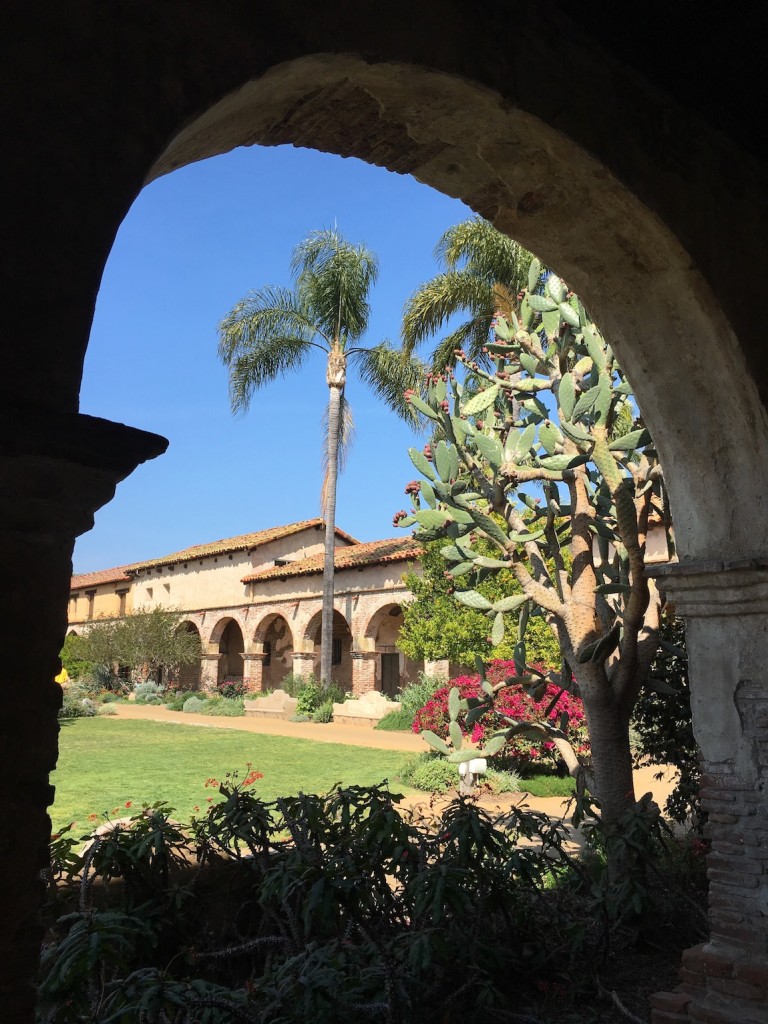 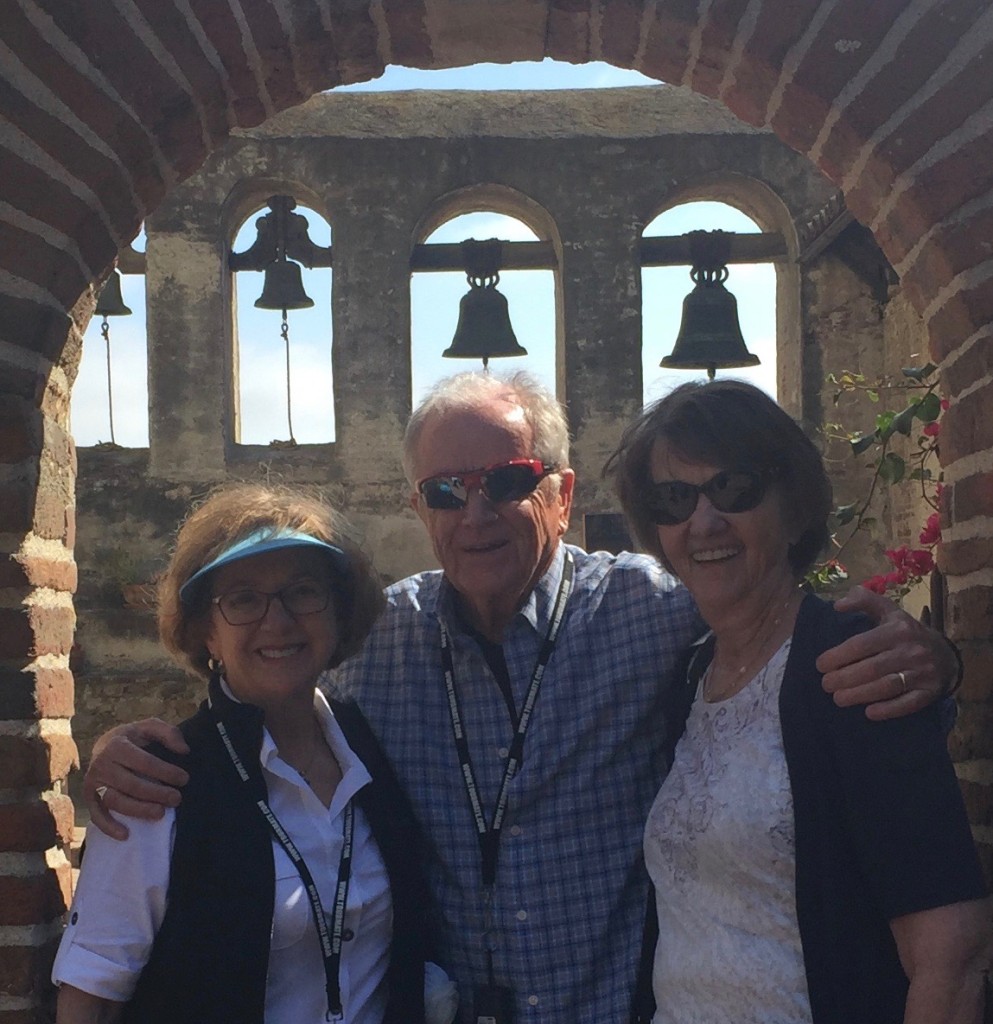 At the train stop in San Juan Capistrano, I was joined by a seatmate. A young, 20-something guy who had planned a trip to San Diego with friends, but they’d bailed on him. So, he was going down by himself. Interesting conversations about growing up in the area, climate and cost of living, etc.

I had a book with me that I’d planned to read, as I would when traveling by air. Didn’t crack it! I pretty much kept my eyes on the scenery out my window. The coastline views were absolutely stunning and those along the interior were interesting, too.

I was really impressed with what I saw as we approached the San Clemente stop. The tracks were smack-dab along the shoreline with houses clinging to cliffs on the left. There was a walking/jogging/running path between the tracks and the cliffs, with lots of people out getting their exercise on a Saturday morning. I was so busy taking in the sights, that I neglected to get many photos!

The first photo below is mine, looking up at the cliffs. At the bottom right can be seen a portion of the path. The second photo, taken of the Surfliner at San Clemente, is by German photographer Patrick Peltser. That one (as well as the Amtrak stock photo at the top of the page) gives a great perspective of how close the train was to the coastline at times!

Before I knew it, the 6-hour trip was over and we were pulling into San Diego’s Santa Fe Depot at 1:00pm. It is a “union station”, that is “a railway station shared by two or more separate companies“, but not called Union Station like so many others in this country. The depot was built in 1915 in a style reminiscent of the twenty-one Spanish missions. 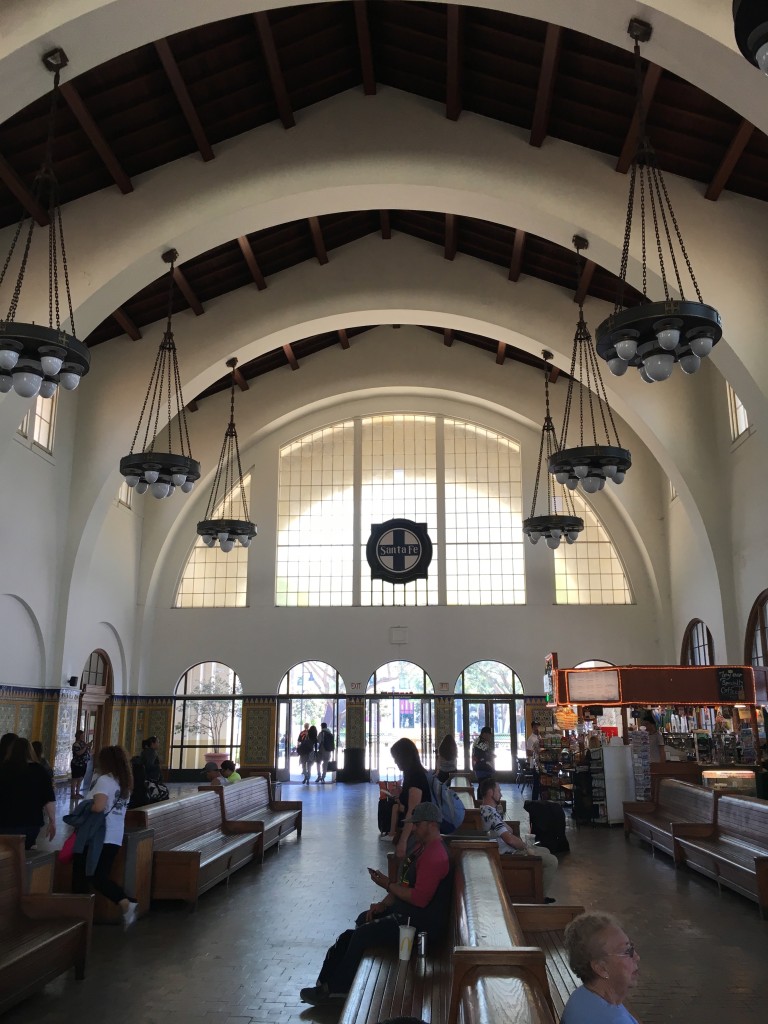 Since I had less than 24 hours before I flew back to Tampa, I caught an Uber; dropped my bags off at the hotel and took a walk through San Diego’s Gaslamp Quarter.

The Quarter is a 16-block party area bordered on the south by the Convention Center (seen in my photo above) and on the southeast by the MLB Padres’ Petco Park. The map below shows the hundreds of bars, restaurants and shops in the area. 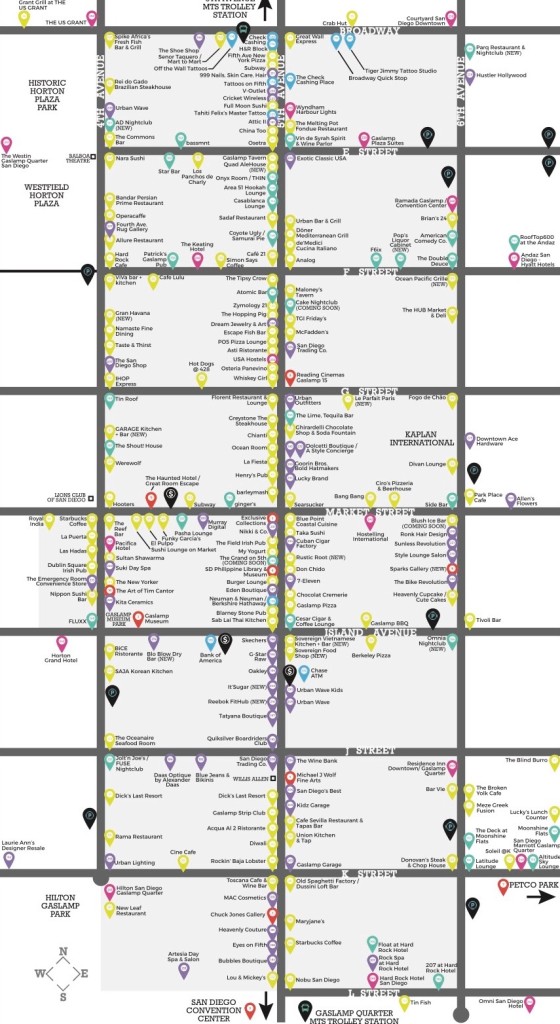 Lots of folks out on a sunny Saturday afternoon enjoying all that the Quarter had to offer. I found an empty barstool at Union Kitchen and Tap for a sip of a local brew and lunch. It was then time to walk back to the hotel; freshen up and get to the ballpark for a game between the Giants and Padres.

Petco Park, a stone’s throw from my hotel, opened in 2004. Andrew Joseph, writing for USA Today Sports in 2016 said, Petco Park is the “undisputed best ballpark in baseball. Really, it’s great. From the expansive views of the downtown San Diego skyline, to the vast local beer and food options, to the perfect weather, Petco Park is everything MLB teams should want for their ballparks. All that’s missing is a winning team, but we can’t blame the stadium. Petco Park rocks.” The Tampa Bay Rays, not unlike the Padre’s, are typically near the bottom of the standings in their division. If the financing can be found, a new Rays stadium will be built in a more central location. With the exception of not having a roof, Petco Park could serve as a great way to do it. Beautiful park!

I chose a seat near third base as the Tampa Bay Rays had lost their ace third baseman to the Giants over the winter break. Longoria didn’t disappoint – he hit a homer his second time up!

Having a few hours to kill the next morning, I walked down to the harbor. Here is docked the USS Midway, an aircraft carrier commissioned a week after the end of World War II in 1945. She served for 47 years, seeing action in the Vietnam War in the 1960s-70s and Operation Desert Storm in 1990-91. She was decommissioned in 1992 and is now a museum ship in San Diego.

Also, located along the harbor is a 25-foot bronze statue, officially known as “Unconditional Surrender”, recreating the embrace between a sailor and a nurse celebrating the end of World War II in Times Square. The statue’s placement was criticized by many as being too “tacky”. The San Diego Downtown News reported that “several commissioners sitting on the Port of San Diego’s Public Art Commission actually resigned over the Port’s decision to support funding”  for the statue. Nonetheless, public opinion prevailed and the permanent statue was installed in 2013. I, of course, had to snap a photo! 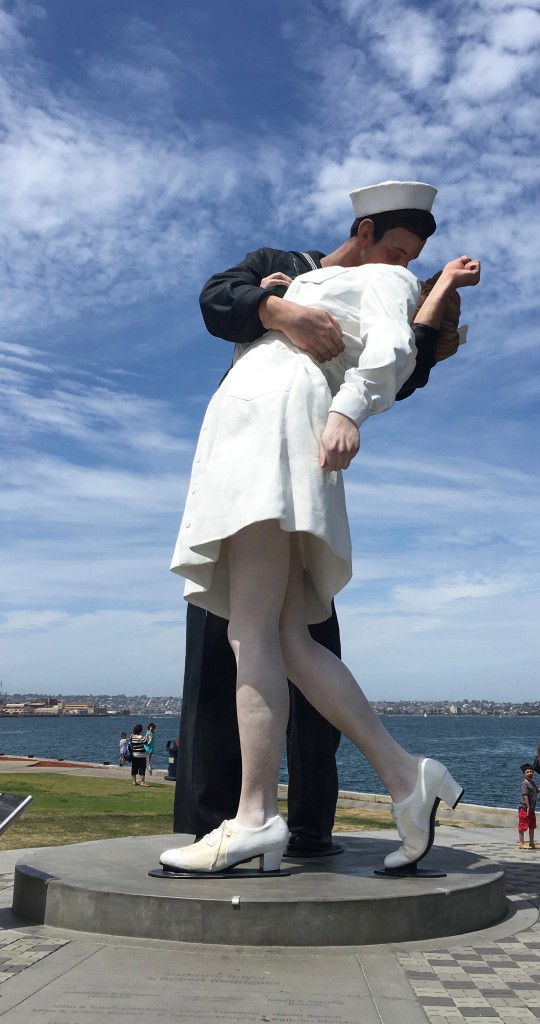 One last thing to talk about from my abbreviated visit to this fine city….Light Rail Transportation.

San Diego’s light rail system, known locally as “The Trolley”, has been in operation since 1981. Today its network of 53 stations and four lines consist of 53 miles of track. It is similar in design to the MAX light rail I found in Portland and the LINK light rail I rode in Seattle. However there’s no direct service from/to the airport – must use shuttle or bus from one of the trolley stations.

The Trolley and its provider MTS have come under some intense criticism over the years. A study by the American Public Transportation Association found that San Diego ranks 24th out of the country’s 25 largest cities for percentage of the population commuting to work on public transit – which ain’t good. However, it’s a heck of a lot better than Tampa, which didn’t even make the list! C’mon Tampa Bay, get your act together!

By the way, Portland ranked 11th and Seattle came in 8th on that survey.

I’m stepping off my soapbox.