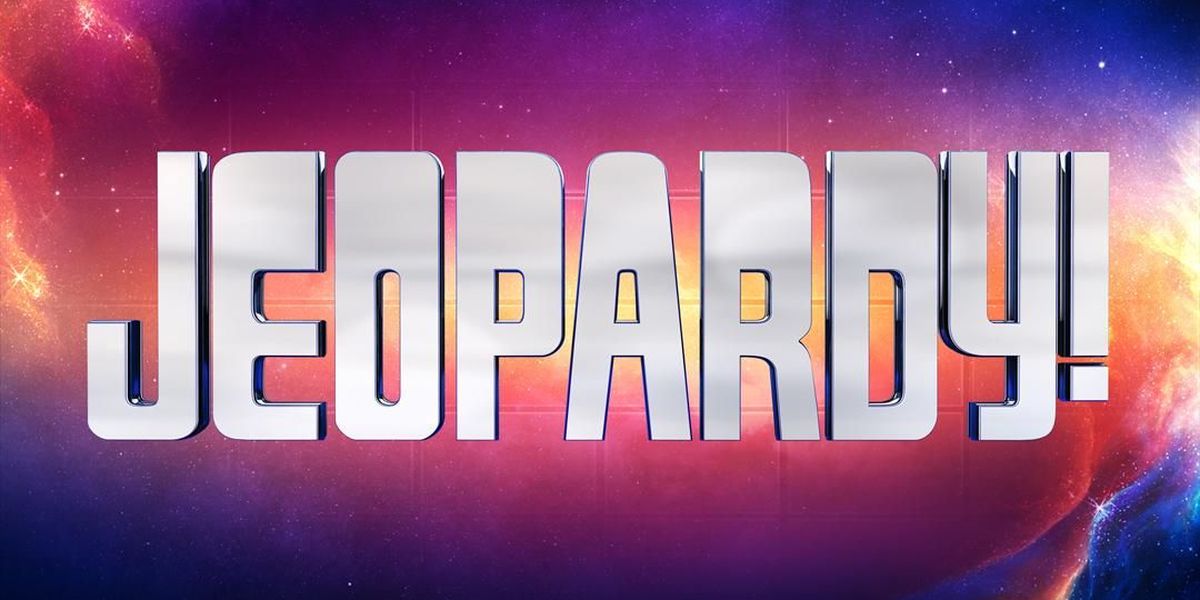 In the 1990’s, our son and his young family decided to relocate from northern California to North Carolina. Our daughter-in-law and very young granddaughter flew east. Rob & I drove the 2,700 miles in a U-Haul truck, pulling their car behind. We’ve always looked back (kinda) fondly on that adventure as “our road trip”.

Fast forward 25 years: Rob called and said, “Wanna take a road trip?” He had scored tickets for the taping of our favorite TV program: Jeopardy! Unknown to me, over the last several months he had been frequently checking their website for available seats – but had consistently come up empty, until one evening when he struck gold! He knows I like to plan my trips well in advance, but this opportunity was just three weeks away. The heck with the advance planning, “let’s do this!” We made plans for me to fly from Tampa to Dallas where he and I would meet and travel together to Los Angeles. Many people get tickets for TV shows when they’re going to be in the area for other reasons. For us, this was the sole reason for traveling across country and it would be a quick turnaround – travel Monday; watch taping on Tuesday; return home on Wednesday.

We got our first taste of Los Angeles traffic when we boarded the hotel shuttle for, what should have been, a short trip to the LAX Marriott, located a stone’s throw from the airport. Some 45 minutes later we were dropped off at the hotel! I have a friend who lives in Mission Viejo who says she avoids LAX and Los Angeles like the plague. For the 42 hours we were in town, we used Uber for all of our trips – a reasonably-priced, hassle-free means of getting around.

Jeopardy! is taped at Sony Picture Studios in Culver City, formerly the studios of MGM. Several shows originate from there, including a couple of my other favorites: Shark Tank and Ray Donovan. As we drove onto the lot (gates pictured below), our Uber driver became super excited when he understood where we were going and why, as he’s a big fan of the show. When a car passed us on the lot, I jokingly said to him, “There’s Alex!”  We almost had an accident as he craned his neck to see! 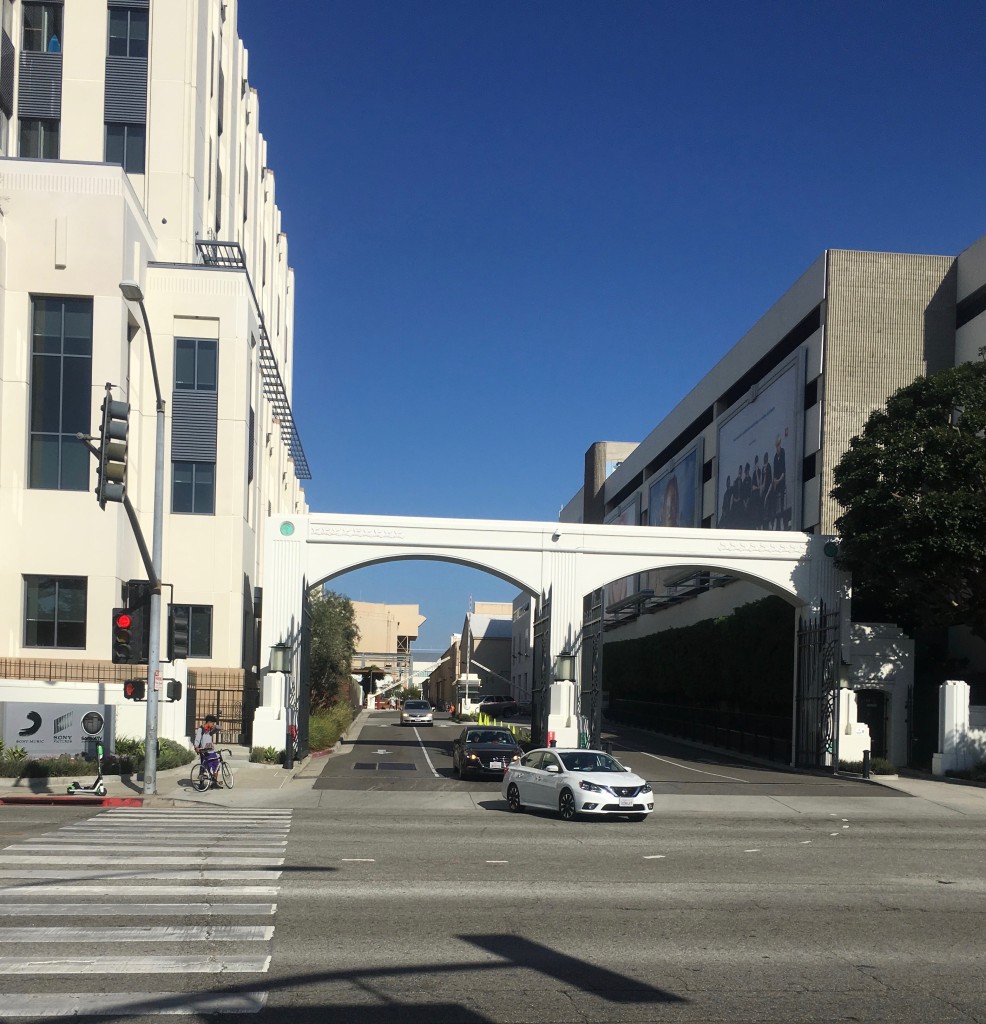 We surrendered the online tickets Rob had received; went through a security screening; were issued wristbands and were told to wait until we were called. We took this pic of what appears to be a ticket. It looks official, but in reality is just an ad for a mobile app. 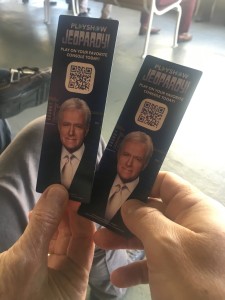 There were two kinds of attendees: people, like us – “general public” and those who were there to watch a friend/family member compete – “guests of contestants”. While waiting, we struck up a conversation with a guy sporting one of the “guests of” stickers. The man’s wife, a contestant, had arrived a few hours earlier and was in the “green room” awaiting her shot at fame. “What’s her name?” “Anne”, he said. “OK, we’ll be rooting for her!” Time to line up for the short walk to Stage 10.

I have yet to learn how to take a proper selfie, and don’t have much interest in learning that skill(?). At any rate, here we are waiting in line to start the walk. The truck behind us is jam-packed with wardrobe for some other show/movie. That drawer coming out of the side is filled with shoes.

Arriving at Stage 10, we waited outside while the “guests of contestants” were seated, then we filed in.

On our way to the soundstage, we passed through a display of Jeopardy! memorabilia (more on that later) and the “green room”, where Anne was awaiting her fate. 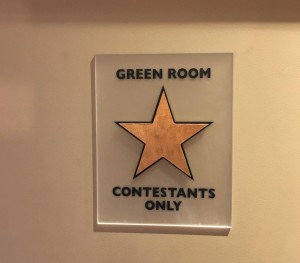 No photography was allowed on the set, so I’ll do my best to describe the experience…..

Walking alongside the back of seating area, it seemed like we were behind bleachers at a high school gymnasium. There was also a distinct musty smell. Lots of black cloth loosely hanging over the walls – probably to deaden sound and keep reflected light to a minimum. The seating area consisted of two sections, divided by a walkway – house right was where the “guests of..” sat; we peons, in the house-left seats. We climbed a set of stairs that led us up to the top of our seating area – I’m guessing there were probably 6-8 rows of seats in each side of the house, consisting of 10 seats each. Enough for about 160 of us. Just by chance, we were seated in the front row – right behind the panel of judges and other behind-the-scenes functionaries. How lucky were we!

In addition to Alex Trebek, the on-air talent includes the members of the Clue Crew: Sarah, Jimmy and Kelly who travel the world shooting clues that appear frequently during the game. Johnny Gilbert is the mostly unseen long-time announcer on the show.

As an added plus, all three Crew members were in the studio that day! On the downside, Johnny was absent. Interestingly, Sarah read Johnny’s lines for the taping; then in post-production, Johnny was scheduled to replace Sarah’s words with his. Ah, the magic of television!

Jimmy was tasked with “warming up” the audience. After giving us the ground-rules (no photography, phones off; no chatter; be enthusiastic, etc.), he regaled us with facts and figures about the show. He played a couple of games where he gave a few folks in the audience the chance to correctly answer some multiple-choice questions – big prize: a Jeopardy! seat cushion!

Jimmy also told us the three shows we were going to see that day (November 6) would be televised on December 17, 18 & 19. I’d often wondered how far in advance these things were recorded, so I had my answer: roughly six weeks. Two more shows were scheduled to be taped that afternoon. That’s a pretty good gig – tape a week’s worth of shows in one day and take the rest of week off!

It felt surreal to be in that studio as the contestants were introduced and Alex appeared. In a clip I recorded off the TV on December 17, there we were in our front row seats – Rob, nearest the camera, with me to his right. Those big grins remained on our faces throughout the tapings and we kept elbowing each other at our good fortune!

In the televised version, there are three commercial breaks: (1) at the midway point of the first board, from which they return to “chat with the players”; (2) just before the double-jeopardy round and (3) just before final-jeopardy, where they pause so the players can “make their wagers”. I’ve been curious about what happens in the studio during those “breaks”. Do they really take a long pause in the taping?

They do. The contestant “handlers” come out to talk with the players – we could not hear those conversations. At one of the breaks, Alex stands beside each of the challengers for a commemorative photo. If Alex has flubbed the wording of any of the clues during that previous segment, the stage manager has him re-read the question and it’s edited into the final version – and he did flub a few over the three tapings! Alex also comes to the front of the set and fields questions from the audience.

During the third break, after the contestants make their wagers on final-jeopardy, we saw one of the “handlers” give a slip of paper (which we assumed contained the wagers) to one the “judges” whom, we further assumed, made the calculations of contestants’ earnings (plus or minus) based whether they answered correctly or not. Because, if you watch the show, you know the final dollar winnings appear immediately after the responses are shown. Of course, this is all conjecture on my part – but that’s what we observed and deduced.

During the breaks between the three episodes, Alex and the winner leave to change clothes and we had a chance to duck out and explore the mini-museum we passed through on our way into the studio.

On display are some of the many Emmys the show has won. It holds the record for the Daytime Emmy Award for Outstanding Game/Audience Participation Show. 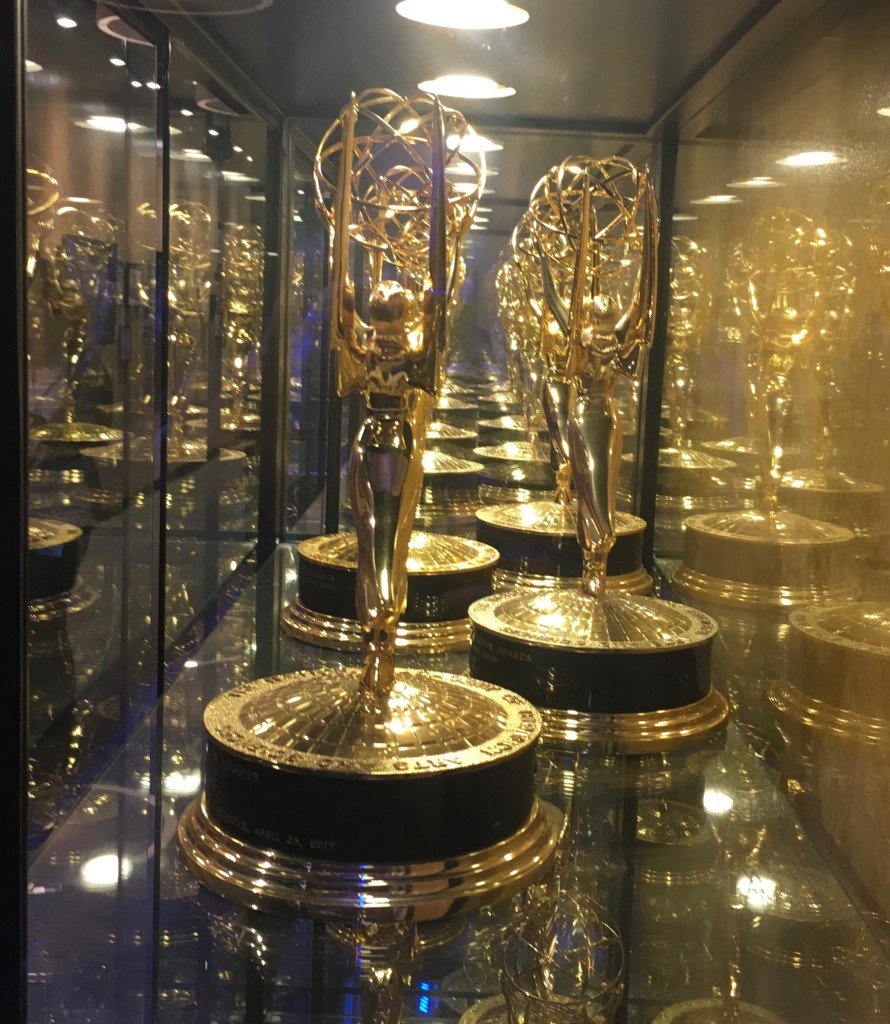 There’s a replica of Alex’s podium containing, among other things, the game script. To avoid reading a clue twice, he crosses each off the script with a crayon. Trivia: He initially used a felt tip pen, but found its squeaking was picked up by the microphones. 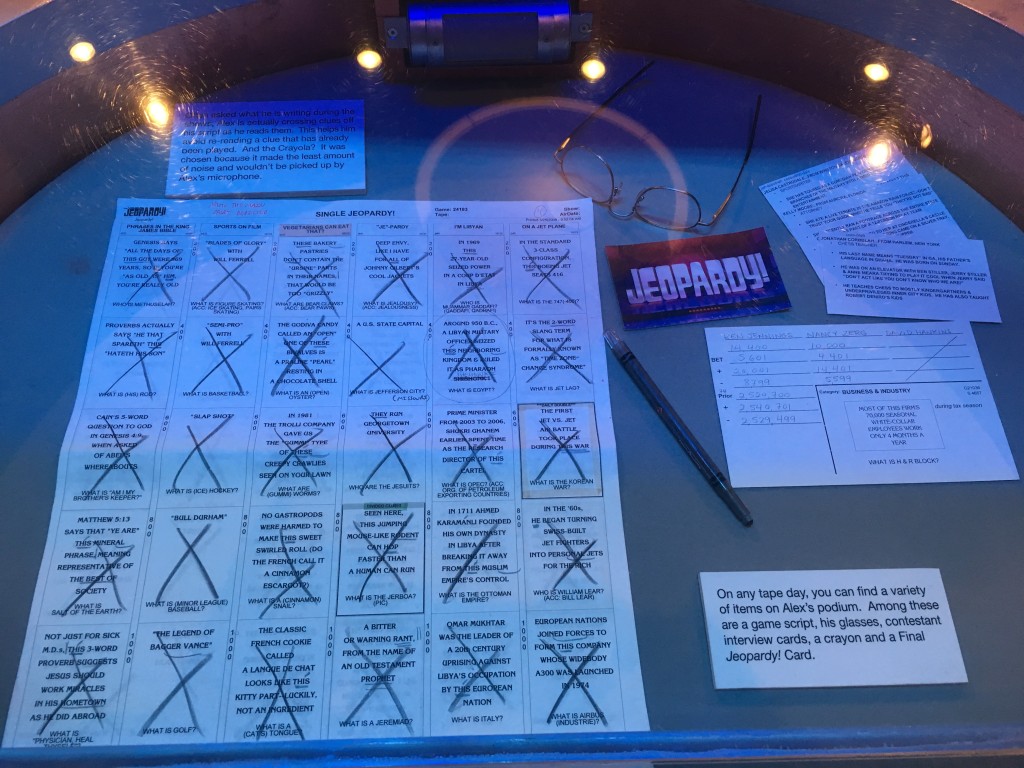 Q&As with Alex were interesting – he answered everything that was thrown at him. Over the years, I’ve come to view him as a bit stuffy and maybe even slightly condescending. And he seems to like to show off his mastery of the French language! My opinion has somewhat mellowed after seeing and listening to him in person. Very interesting guy who attempts to do his own home repairs, not always successfully. He works the LA Times crossword each day to keep the mind sharp, as do I. He abhors the pharmacological ads on TV, and says “I hate it when they say don’t take this medicine if you are allergic to any of its ingredients. How are we supposed to know what’s in it!?” Exactly what I’ve screamed at my TV a number of times!

The reigning champ coming into our first taping, was one-day winner Jackie Fuchs. Jackie won the first game. Anne, the wife of the fellow we met before we were led to the studio, was a contestant on the second show. She did well, but was out-played by Jackie. Jackie went on to win all three of the shows we saw that day, making her a 4-day winner. We left there wondering how she would do in the next show due to be taped that afternoon.

We learned during Alex’s chats and subsequent internet searches that Jackie is a fascinating character. She earned a bachelors degree in linguistics from UCLA and a law degree from Harvard, where one of her classmates was Barack Obama. She was introduced as an entertainment lawyer, but she was much more than that. In the 1970’s, at sixteen using the name Jackie Fox, she played bass guitar for the all-girl teen band The Runways. In the 1980’s she was a contestant on The Dating Game and in 2013 she appeared on Who Wants to be a Millionaire.

We had to wait for the the afternoon taping to air in December to see if she continued to dominate. She did not. She didn’t appear to be herself and it was revealed that during the lunch break, she had a medical issue which she attributed to not eating. All things must come to an end, but she was a hoot to watch as she dominated our three tapings.

Thanks to Rob’s perseverance, this was an absolutely wonderful experience. The best road trip ever!