The Department of Defense Warrior Games were established in 2010. The Games’ stated purpose is to “enhance the recovery and rehabilitation of wounded, ill and injured service members and expose them to adaptive sports. The Games encourage them to stay physically active when they return to their local communities, and inspire and promote opportunities for growth and achievement.”

Britain’s Prince Harry, who participated in the opening of the 2013 games, was so inspired by the games he created a similar event, the Invictus Games – launched in 2014.

In the fall of 2018, I was excited to learn the June 2019 Warrior Games were to be hosted by the U.S. Special Operations Command (SOCOM), based at MacDill AFB here in Tampa. Furthermore, many of the events would be held at venues throughout the Tampa Bay area for which they would be looking to staff with volunteer help. I immediately jumped on their website to sign up! I was told it was too early to volunteer and to “check back later”. I did that a few times over the next several weeks – same message. Long story, short version: by the time I checked in a few months before Games were scheduled to start, I was told all volunteer slots had been filled!

I wasn’t able to volunteer, but that didn’t stop me from witnessing many of the competitions; interacting with family members; cheering for both teams; and being truly inspired by these warriors.

The Games had a real international feel with the inclusion of teams from United Kingdom, Canada, Australia, Denmark and The Netherlands – in addition to those from the US Army, Navy, Air Force, Marine Corps and SOCOM (which included members from all branches on the US military).

With the exception of the photo at the top of the page (which I snapped at the opening ceremony), all others are official DOD photos of the events.

A few highlights from the week….

The opening ceremony, emceed by comedian Jon Stewart, was held in Tampa’s hockey arena – well-attended by locals and family members of the athletes. But the night belonged to the 300 participants. Similar to the Olympic games, the various groups entered the arena to rousing cheers. Many had visible wounds: rolling in wheelchairs or walking with the aid of canes, crutches and/or prosthetic limbs. Still others had suffered wounds that weren’t immediately visible: brain injuries, visual impairments, PTSD and other illnesses. Our National Anthem was sung by U.S. Army Captain Luis Avila (pictured below), who was severely wounded in Afghanistan in 2011. 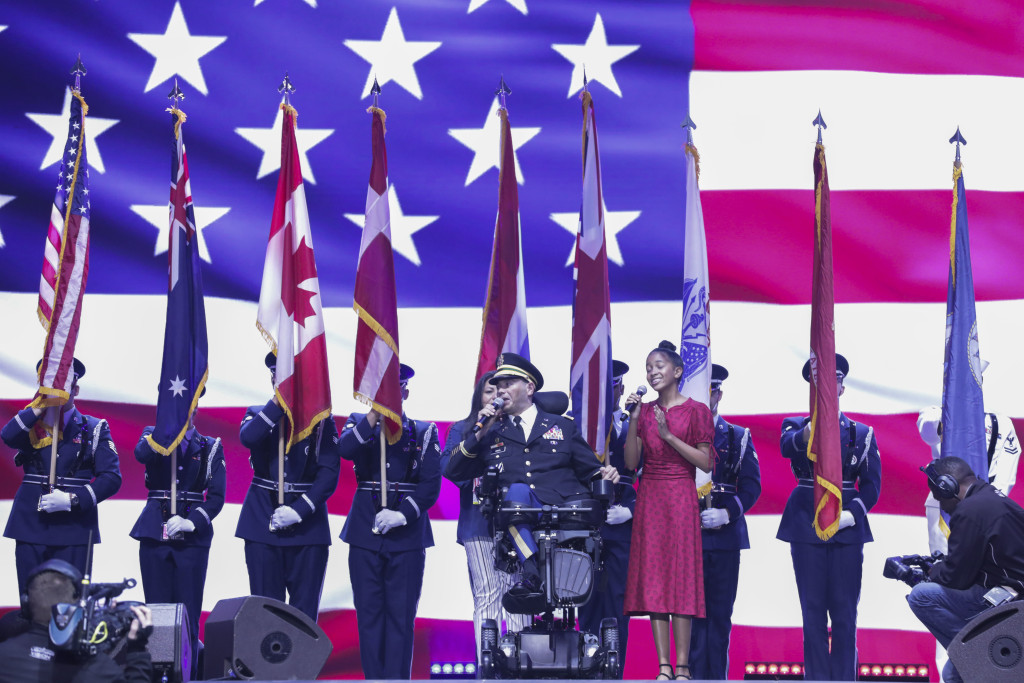 After speeches by some of the assembled dignitaries, the torch was passed; the flame was lit and the Games were officially underway! 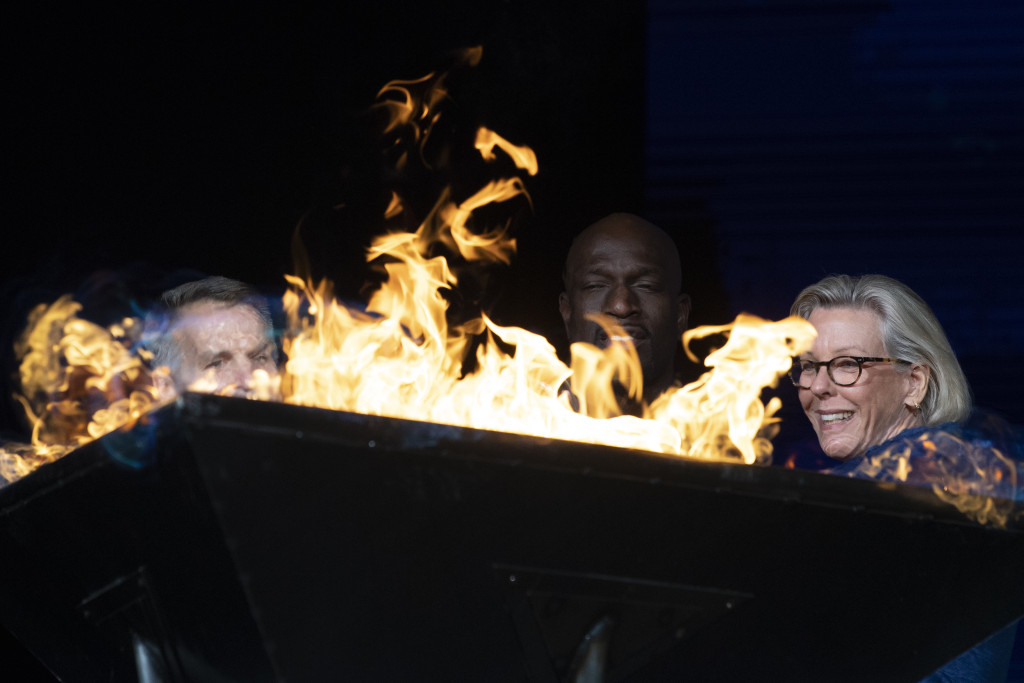 Bayshore Boulevard is a 4.5 mile scenic stretch, containing expensive real estate on one side of the roadway and great views of the Hillsborough Bay on the other. It features a linear park that’s dubbed the longest continuous sidewalk in the US – don’t know that there’s much truth to that claim. The boulevard is closed from time-to-time for foot races, charity walks and the annual Gasparilla Pirate Fest. On the morning after the opening ceremonies, the cycling time-trial portion of the games was held on the boulevard. I was there to cheer on some of the participants. 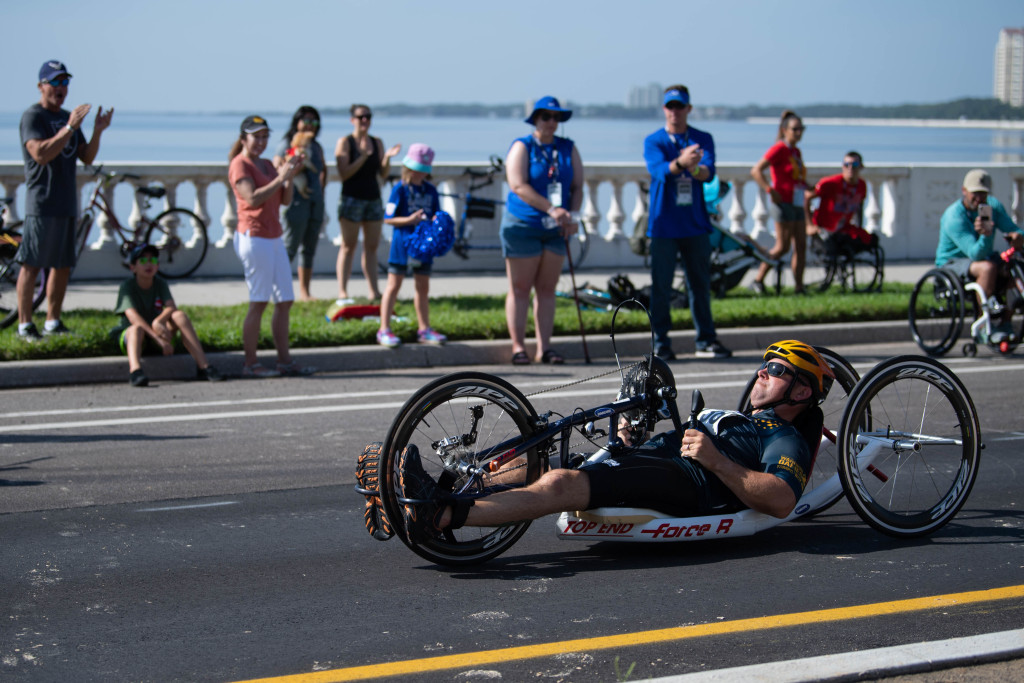 The family I encountered during the archery preliminaries provided me with a fascinating close-up view of one of the warriors.

An athlete from team Australia draws an arrow during the archery preliminaries at the Tampa Convention Center during the 2019 DoD Warrior Games in Tampa, Florida, June 24, 2019. The DoD Warrior Games were established in 2010 as a way to enhance the recovery and rehabilitation of wounded, ill or injured service members and veterans and to expose them to adaptive sports. (U.S. Marine Corps Photo by Sgt. Bryce Hodges)

As I approached the stands along the archery venue, I spied an open spot at the top tier. I liked to be up there because I could stand to get a better view without blocking anyone else’s sightline. I greeted the two women who were seated next to me and struck up a conversation. They were the mother and the fiancée of Rob, a participant representing the US Air Force in the competition. They explained that archery was not his strong suit, however he had entered this event along with rowing, field, swimming and (his specialty) powerlifting. Many of the athletes entered multiple events, without any hope of winning, to help fill out their teams. I now had an individual to root for!

As we watched the competition over the next hour or so, the mother and fiancée eagerly filled me in on Rob’s long journey.

Since birth, he had taken medications to control a defect which caused seizures. This situation did not stop him from securing an appointment to the US Air Force Academy, graduating in 2006 to become a civil engineering officer. Over nine years he served in that capacity at several locations, including a couple of deployments to the middle east. It was discovered his life-long medications had become ineffective in keeping the seizures at bay and had some other adverse side effects – brain surgery was the only option, which he had in 2013. He was medically retired from the Air Force in 2015.

Adaptive sports have played a big part in Rob’s recovery. He participated in Prince Harry’s Invictus Games in Australia in 2018 where he elected to complete in sailing – something with which he had very little experience . While out on the water, he saw the prince and entourage in another boat and called out to him that he could expect to receive a hug when he met him again. The prince decided no time like the present and welcomed Rob aboard. His mother showed me video of encounter, where Rob bear-hugged the prince and actually lifted him off his feet. I found the photo below from the Daily Mirror.

I watched some wheelchair basketball – a sport in which all athletes must compete in wheelchairs, even though their injuries may not require them to use one.

Powerlifting was a first-time event for the Warrior Games. A specially designed bench press was used to allow for equal competition among the athletes who may or may not have lower limbs. I watched a few of the early rounds. Rob, whom I talked about earlier, went on to win the gold medal in his weight class.

Wheelchair Rugby was one of my favorites. Players are classified based on their functional physical limitations. Four players (with a prescribed mix of classifications) from each team are on the court at one time.  It’s 32 minutes of fast-paced, no-holds-barred action! 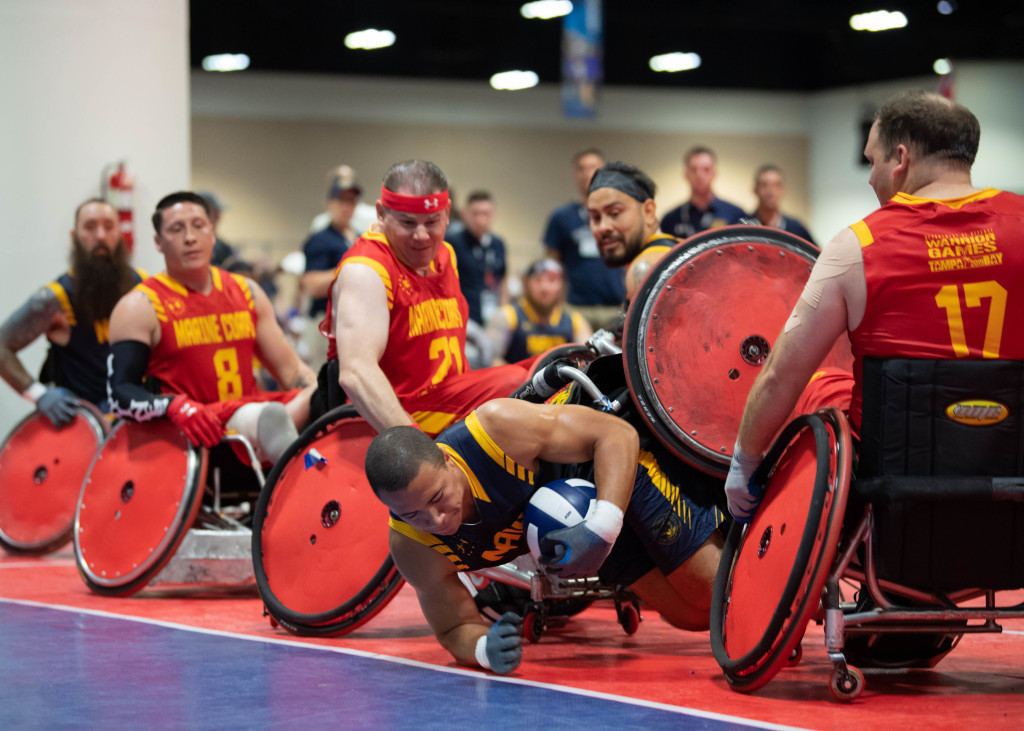 The encounter I had with Rob’s mother and fiancée reminded me of another I had in late 1980 or early 1990. During that time, I was making weekly trips between Winston-Salem and Atlanta. On one flight, my seatmate was Olympic gold medal gymnast Bart Conner. He had retired from competition and was doing some work for ABC Sports. I told him how much I enjoyed the “Up Close and Personal” segments that longtime ABC’s Jim McKay put together on the athletes. We talked about how it was so much more enjoyable to watch a sporting event once having seen a McKay segment.

Every one of the 300 Warriors who came to Tampa had a personal story to tell. I was fortunate to watch just a few of them compete and get to know one of them “up close and personal!”