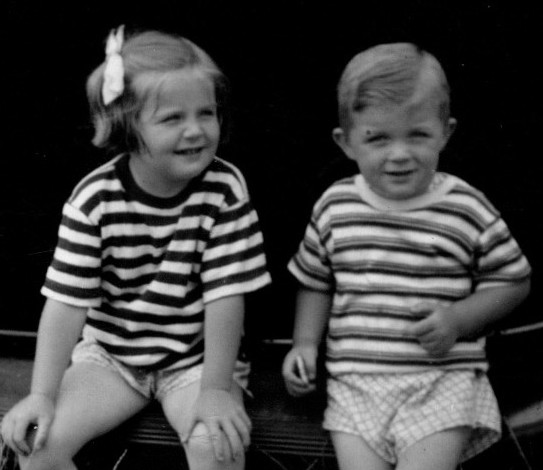 As with most folks, my family members share with the others whenever they see a TV series or movie they think the others might like – especially over the last several months as we’re all hunkered down during the Covid-19 pandemic. On the last day of 2020, my son shared a link to the movie Uncle Frank saying, “Made me think of Uncle Carl and some of the things he may have gone through.” This caused me to think about my brother and the rough time he had coming out to his family in the early 1960’s.

My sister Beverly was born in 1935 and Carl, Jr. was born 1936. That’s the two of them at the top of the page sitting on the running-board of my dad’s Ford. I came along in 1941 and my younger brother in 1942. That 5/6 years separation between the two sets of siblings was pretty wide in those days. Beverly was closer to Carl than I would ever become. We all looked up to Beverly as she became the leader of the pack – although she was married at 18 and out of the house before I was a teenager. But, I digress – this story is about my older brother.

Here’s another shot of the two of them with my dad’s brother Alfred in the backyard of my paternal Swedish grandmother. [more about my grandmother at A Walk Back In Time] 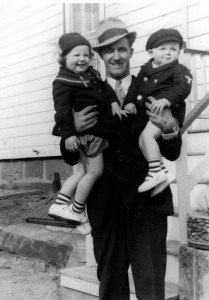 In those early years, I was pretty much involved with my circle of friends and activities and he and Beverly theirs. We had a cottage that my dad built by a lake in a small town about 20 miles south of our home. We’d spend the better part of summers there – less as we got older. My mother called it her “little cottage in the pines”! [more about my mother at Joy In The Ordinary]

Carl graduated high school in 1954 (yearbook picture below). He had a knack for mathematics and accounting. I believe he took courses at Bentley School of Accounting and Finance (now Bentley University) in Boston. And I’m pretty sure he worked at Boston Gas Co. During this time he was dating a girl named Janice. I know I’m kinda vague on these facts – probably because I was so young then and didn’t really pay attention and/or I’m so old now it’s hard to conjure up stuff that happened 65+ years ago. At any rate, those facts (except Janice) are really not important to the main thrust of this tale. 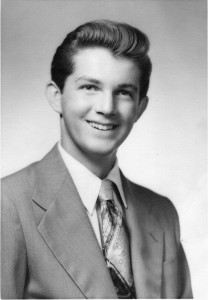 In 1957 Carl left Massachusetts and civilian life to join the US Air Force. Discounting his basic training, my recollection is that he spent his entire four-year career at the Amarillo, Texas Air Force Base. During his time in the AF, he and Janice were married. In January of 1960 they welcomed a baby daughter, Susan.

In the fall of 1959, I entered Northeastern University in Boston. Two years later I was getting restless; not applying myself and decided to drop out of school to follow my brother’s footsteps and join up. Needless to say my parents weren’t happy with my choice – they saw me as their last hope for one of their children to finish college. [As an aside, they were ecstatic thirteen years later to attend my commencement ceremony – better late than never!]. The girlfriend I’d been dating for four years, who was in Nursing School at the time, told me she “could never marry a man who didn’t have a college degree”. I thought that was rather elitist. We broke up.

In 1961, about the time Carl was finishing up his enlistment, I wrote to him to get his take on his time in the Air Force and any advice he’d like to throw my way. The reply I received was not what I expected.

After telling me he’d wish that I’d stay in college and finish up before joining, he dropped the bombshell…. He and Janice were divorcing; she and Susan would be moving back to Massachusetts; he had met someone else; he was gay.

My first reaction was how could he do this to Janice! If he knew he was gay, why press on with the relationship, marry and have a child? I lashed out, writing back telling him how disappointed and angry I was. And in my agitated state I indicated we probably wouldn’t be seeing each other again.

I’m sure he must have had internal struggles growing up in the 40’s/50’s – much like Uncle Frank in the movie. I learned he had come out to my parents earlier. I approached my mother after receiving his letter – she said she knew and wanted Carl to give me the news directly.

Although his being gay was OK with me; not so my parents. My mother told me Carl would always be welcome in their home, but she didn’t want to meet or have anything to do with his partner. I thought that sounded so cold and cruel. My dad would never speak of it to me. I’ve thought about their reactions to having a gay son many times over the years and have come to this conclusion: For my mother, who was in church every Sunday along with us kids, homosexuality was a sin. My dad, a second-generation American of Swedish heritage, felt it an affront to his manhood. It has taken decades for LGBT rights in the US to evolve to where they are today. The 50/60s were the dark ages.

I didn’t find my brother’s being gay to be repulsive or something to be ashamed of, as my parents did. My anger toward Carl was for what he had done to his wife. I came to regret having taken such a strong stand as it soured our relationship for many years.

My brother had a special relationship with our mother’s sister, Dorothy. Aunt Dot and Uncle Charley never had children and looked upon my siblings and me as more than a niece and nephews. For us, they were fun to be around. Even though his partner was not welcome in my parent’s home, Carl continued to visit on occasion. But, to my recollection, he never again slept in their house – he chose to stay with Aunt Dot.

In 1969 my brothers and sister planned a 40th wedding anniversary party for my folks. I was not able to get away from my USAF duties to attend, but they were all there with Carl as “master of ceremonies”. To me it just showed how much he tried to please our mom and dad, in spite of their condemnation of his lifestyle. Such a pity. Here’s a picture of the festivities. 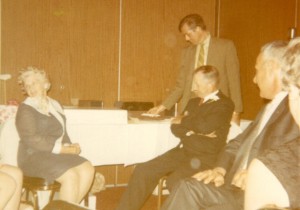 Our reconciliation came 20 years after the rift. Mother, who wasn’t in great health most of her life, was to have heart valve replacement surgery at Massachusetts General Hospital in Boston. We four kids stayed at the hospital until we were sure the surgery went well. Dad, who “didn’t like hospitals” stayed by the phone at home. My brother and I had some quality time together. Through my sister and Aunt Dot, he had been kept current with my life and was eager to see photos and know all about my children. I learned about Avent, who at that time had been his partner for 20 years. This was the man for whom he left Janice. I told him I’d like to meet Avent some day.

At some point, and I can’t remember exactly when or how, I learned that Carl, Jr. had legally changed his name to John. I think not having the support of our dad over the years weighed pretty heavily on my brother. I know it hurt my dad, but I understood John’s position.

In 1987, my sister called to say John was hospitalized in critical condition. I called Avent to see what the situation was. The doctors were working to diagnose the source of my brother’s respiratory ailment, but had nothing definitive yet. He was in isolation in the ICU at a Houston hospital. I asked what I could do to help. Avent, an executive with Sears Roebuck, reluctantly said he was required to be out of town the next week for business meetings and asked if I could I come out to be with John. A couple days later, I was on a plane to Houston.

The first few days before Avent went on his business trip were spent with learning the ropes – where things were around the house; the best routes to the hospital; introductions to a number of their wide circle of friends – and of course visiting with John. We were allowed short visits every hour or so. It was very difficult for John to speak, so he would write us notes. In his typical caring fashion, he made Avent and me promise that I wouldn’t spend any of my money while in Houston as “you have a large family and can’t afford it”! I stayed there several days, then my sister & niece followed.

On May 13, 1987 we had news John passed away at home. He died of Idiopathic Pulmonary Fibrosis (IPF), which is progressive lung disease “of unknown origin characterized by an irreversible decline in lung function.” From the research I’ve done over the years, I believe it was related to the rheumatoid arthritis (RA) from which he suffered most of his adult life. To combat the RA, he had numerous gold treatments. There is some research which links those gold treatments to IPF.

I traveled to Canyon, TX for John’s funeral. Upon my return home after the funeral, I sent letters (email wasn’t as ubiquitous as it is today) to my parents, sister, younger brother and Aunt Dot. Quotes from those letters follow….

“That part of Texas is very flat: you can see for miles and miles. The cemetery in Canyon sits on a slight elevation. It was a beautiful day with some big white puffy clouds and a nice breeze, with temperatures in the low 80s.“

“Avent warned me this would not be quite the traditional Presbyterian variety. John loved music and always tuned to an easy-listening station. His favorite performers were Johnnie Mathis, Jane Olivor and Barbara Streisand. They would play a song by each of those artists during the service“

To my parents: “I planted the daisy you gave me a year ago in a whiskey tub in our yard. It survived the drought of last summer and the snow we had this winter. I was out cutting the grass on Friday and had an inspiration. I carried a part of that daisy plant to Texas with me on Saturday. With the help of the caretaker at the cemetery, we planted it near John’s grave beside a fir tree. He promised to look after it for us. So, a little bit of Massachusetts (by way of Georgia) will be with him.“

More to my parents: “Avent has appreciated the conversations he’s had with you folks over the past several months. He’s indicated that within the next year or so he’d like to make a trip to meet you…“

I’m really not here to pass judgement, but as I read that letter 34 years later in 2021, I was really struck by that last part: “…has appreciated the conversations…” Finally!

Most of the players in this saga are gone now. My mother passed away two years after John in 1989; Beverly in 1991; my dad in 1995; Avent in 2000 and Janice in 2005. Susan, who was adopted by Janice’s second husband, lives with her husband and two children in New Hampshire.

Together once again, Avent and John lay side-by-side in Dreamlands Cemetery in Canyon, Texas.