Tattooing has been practiced across the globe since the stone age. According to Britannica, the oldest discovery of tattooed human skin to date may have been found on the body of Ötzi the Iceman, “an ancient mummified human body that was found by a German tourist, Helmut Simon, on the Similaun Glacier in the Tirolean Ötztal Alps, on the Italian-Austrian border, on September 19, 1991. His few remaining scalp hairs provide the earliest archaeological evidence of haircutting, and short blue lines on his skin (lower spine, left leg, and right ankle) have been variously interpreted as the earliest known tattoos or as scars remaining from a Neolithic therapeutic procedure.” It’s estimated he died 5,300 years ago!

Seen in this photo, the reconstruction of Ötzi based on forensic analysis of the mummy; in the South Tyrol Museum of Archaeology in Bolzano, Italy. 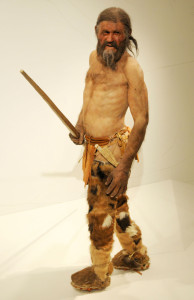 Growing up in the 50’s, I never really thought about getting tattooed. Fast forward to when I entered the USAF as a young 19-year old.

In the summer of 1961, I was finishing up my training at Keesler AFB in Biloxi, Mississippi. Having been raised in Massachusetts, this was the first time I was truly on my own and my first foray into the deep south.

Biloxi in those days was a relatively sleepy town, situated between Mobile and New Orleans along the gulf coast – an area dubbed the “Poor Man’s Riviera”. It was a prime alternative to Florida as a vacation spot for northerners. There were lots of bars and tattoo parlors to entice the young airmen – however we were advised to stay clear of them. It would be another 30 years before the giant gambling casinos would arrive, luring in even more tourists. After my time there, both Hurricane Camille (1969) and Hurricane Katrina (2005) devastated the area.

One sunny afternoon after class, a friend and I decided to disobey the advice we were given to stay away from those nasty tattoo parlors and get inked! Both being fans of the Roadrunner cartoon, we decided that would be the perfect tattoo. To make things even more enticing, the “artist” would give us a discount if we got the same one. I got mine on my forearm; my friend on his shoulder.

My only regret about the tattoo is I wish I’d done as my friend had – placed it on my shoulder. Although, having it “out in the open” has certainly been a conversation-starter over the years. I cannot count the times someone has said, “Oh, you must have been in the Navy” or “What’s that, an anchor?”. After explaining what it actually is, they’d get it.

It was when we lived in Arizona in the late 1960’s that I saw my first non-cartoon roadrunner! 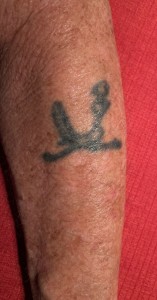 My only other tattoo became a reality 60 years later in January 2021.

There are many things that made Joanna one-of-a-kind, but nothing more distinctive than her handwriting. For some time, I’ve contemplated getting a tattoo to honor her memory. With 2020 marking 10 years since her passing, I decided it was the perfect time to act.

In November 2020, I contacted a friend’s husband who is a tattoo artist. David agreed to help me. I told him, “I’d like her first name, in her distinctive script, on the inside of my left wrist. I envision something small, maybe an inch or two long. I have a few samples of her signature I could email you.”

We did some back and forth until I came up with the sample that he agreed would work. However, Covid caused him to close down for the last several weeks of 2020. He contacted me in early January and we scheduled for the deed to be done.

It’s exactly how I’d envisioned it and I’ll have a memory of Joanna with me every day. 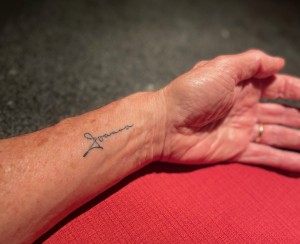