Our tour guide Mike, a retired Arlington high school football coach, told us we were standing in the largest air conditioned room in the world. It’s maintained at a comfortable 74 degrees, even when the outside Texas temperature exceeds 100! I’m not a fan of the Cowboys, but was most interested in seeing inside their stadium. My son Rob arranged a VIP tour of AT&T stadium for us when I was out to visit this summer.

A pair of tall arches spans the length of the stadium dome, anchored to the ground at each end. There are LCD displays everywhere you look, offering fans viewing options that extend beyond the action on the field. The famed center-hung video display board was the largest HD television screen in the world at the time of its installation. In addition to a retractable roof, 180-foot-wide by 120-foot-high glass doors, located at each end of the stadium, open. Mike told us the glass doors at each end are controlled to open simultaneously — if opened separately the rapid change in air pressure could cause a dangerous situation! 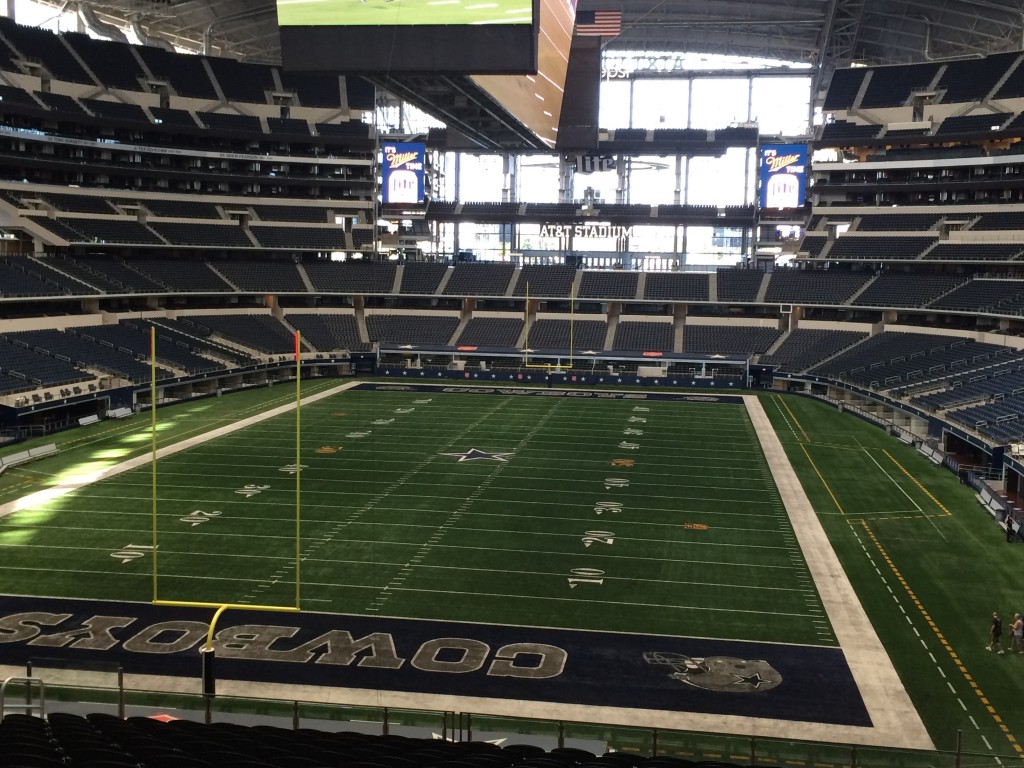 View from the end zone

The base of the one of the arches; the “party plaza” and, in the distance, the Texas Rangers baseball stadium can be seen through one of the giant end zone glass doors. 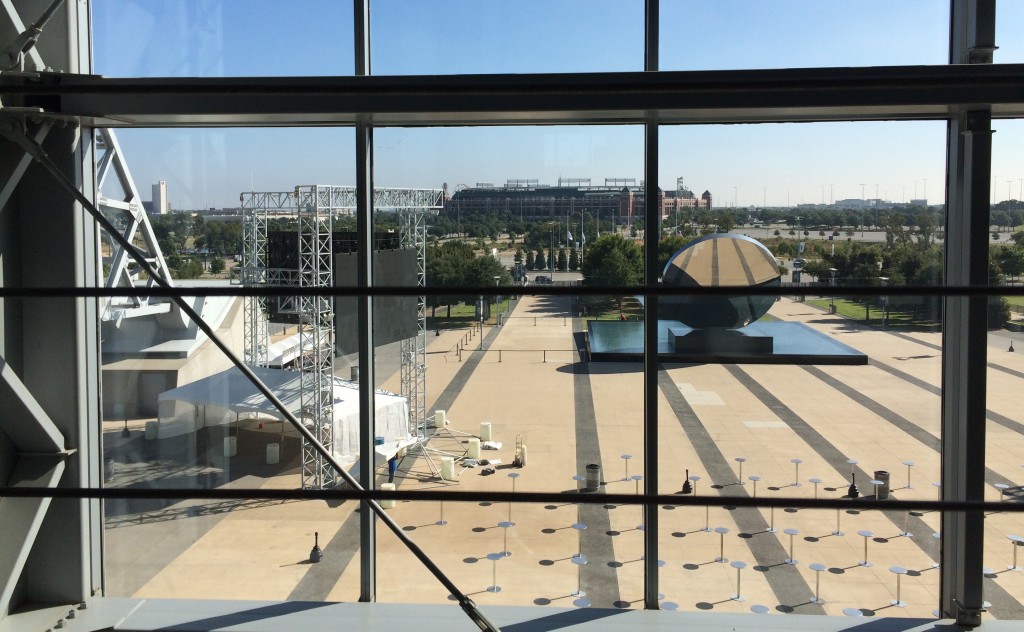 Cowboys owner Jerry Jones’ “office” during home games is located on the 50-yard line. When we visited, it was empty of the furniture, communications gear and video screens that are there during games. From here Jones and his sons “work the game”. There’s a private elevator that carries him to his luxury box one level below. It also goes down to the field and to the ground level garage where his car is parked. Rough life! 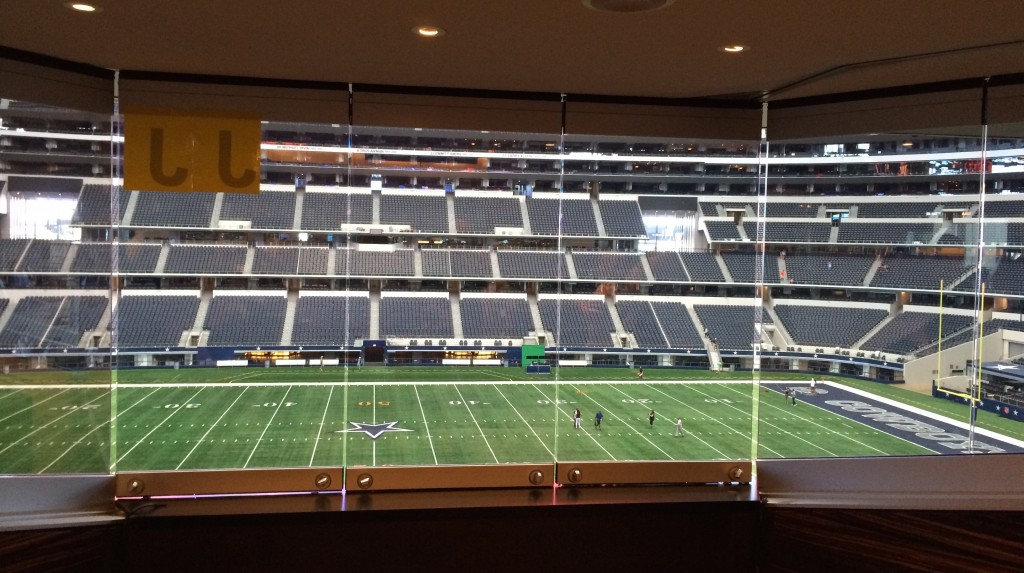 Speaking of luxury boxes, there are 300+ of those babies ringing the stadium. Mike wasn’t allowed to talk prices on the tour, other than tell us about the 29-dollar standing-room-only tickets allocated to each game. We did get to sit in one of the double-size boxes with a great view of the enormous scoreboard. Mike explained you can tell the sideline across the field is Dallas’ because the star midfield points its way. 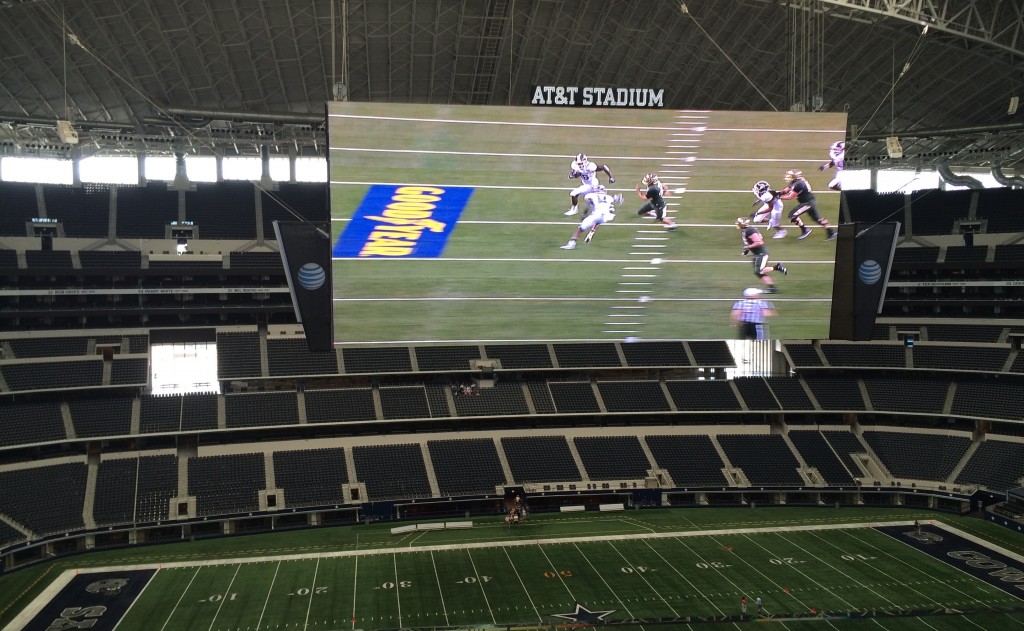 Giant scoreboard as seen from a luxury suite 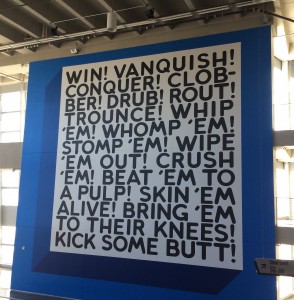 Works of art can be found at every turn throughout the stadium, from the very small sculpture to huge murals.

One piece of art was particularly intriguing. Exploded View (Cowboys), consists of 3D arrangements of flickering LED bulbs that transform 2D images of footage of great plays from Dallas Cowboys games into ghostly images – although it’s kinda hard to see anything but white dots in this photo! Depending upon where you stand, you see different things. Fascinating! 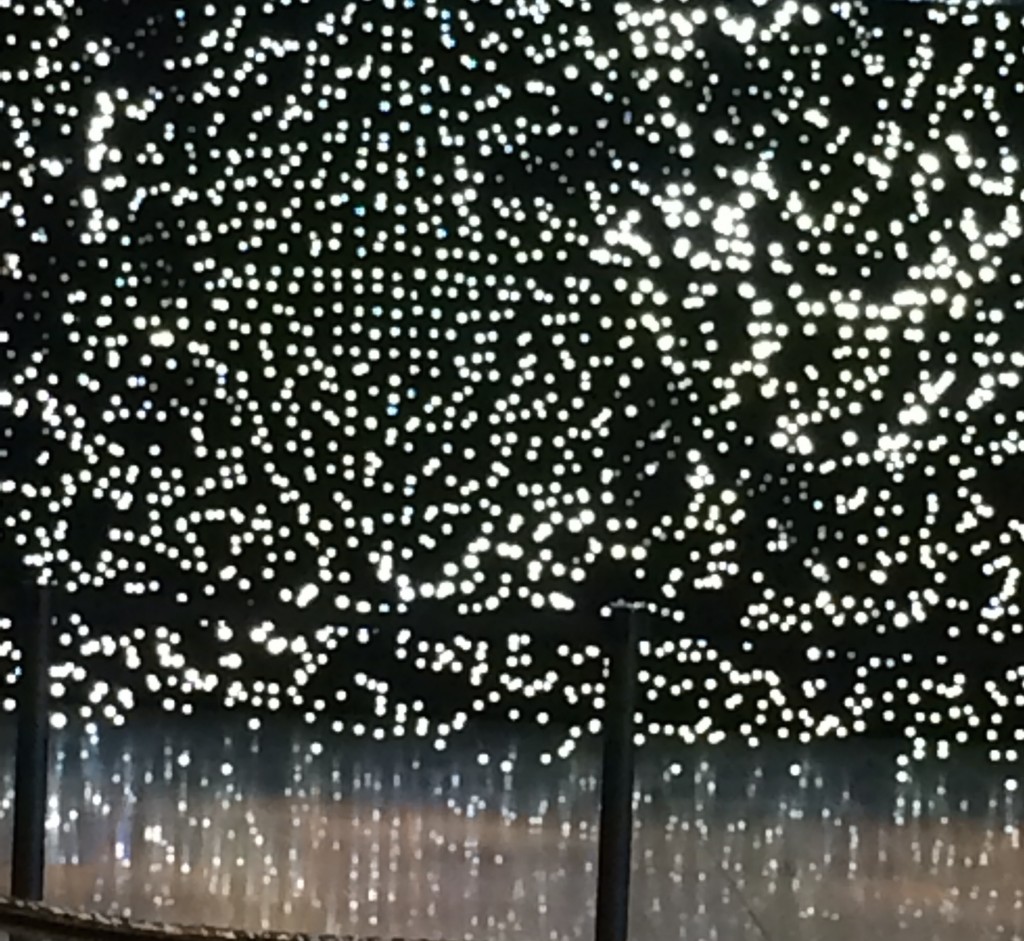 We visited both the Cowboys and the Cheerleaders locker rooms. Each, fairly nondescript. To ring every dollar they can out of the facility, these rooms, along with most all other locations in the stadium are available to rent for most any occasion – meetings, weddings, receptions or whatever people can think of!

At the end of our 2-hour guided tour we were led through the Miller Club, where high-rollers greet the team on their way on/off the field. Once on the field, we got the chance to toss a semi-deflated football – was it there as a jab at the Patriots deflate-gate? Some of our fellow tour goers were having their picture taken mid-field.  I admonished Rob when he grabbed at some of turf to check out the velcro. Yet, I was the one who was warned by an official-acting grump when I picked up a pylon to check its heft! Time to leave!

In spite of the grump, the tour was great! I was really impressed with the cleanliness of the place – realizing it’s a fairly new facility and we were taken thru some of the more upscale spots in the facility. The photo below was taken by a pro ($15 a pop) at the same spot as mine (View from the end zone, above), but the background looks like it was green-screened. I can assure you we were there! 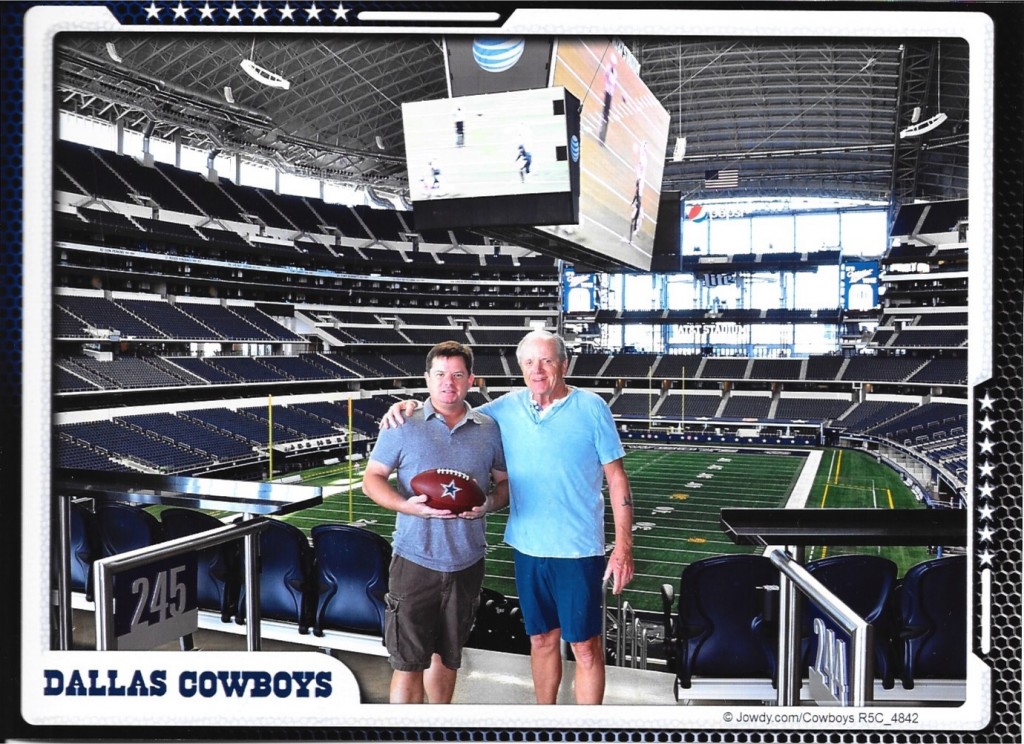 This is not green-screened – although it looks like it is!

← Monterey-to-Santa Barbara and Beyond
Why I Volunteer →
Home Page