In the post Out of Hibernation, I mentioned a planned visit to three National Parks in California (Pinnacles, Kings Canyon and Sequoia). The trip had to be postponed in 2020 due to the pandemic, but was back on for the fall of 2021. However, it looked like the wildfires racing through the Sierra Nevada might force another postponement. On Saturday September 11, three days before my scheduled departure from Tampa, the Mercury News of San Jose reported the following:

“Two of three fires in Sequoia and Kings Canyon National Parks, which were sparked by a major lightning storm that passed through the area Thursday night, are growing and have prompted officials to close the entrance to Sequoia National Park.“

After discussing with my three traveling companions, we decided to press on with the knowledge that Sequoia was most certainly off the schedule and we’d take it cautiously with regards to Kings Canyon. In the end, Sequoia remained off-limits. We were able to spend two (of the planned three) days exploring Kings Canyon, before it closed down. The upside is that we were able to spend an extra day at Pinnacles that I’ll describe here. I’ll write about Kings Canyon another time. 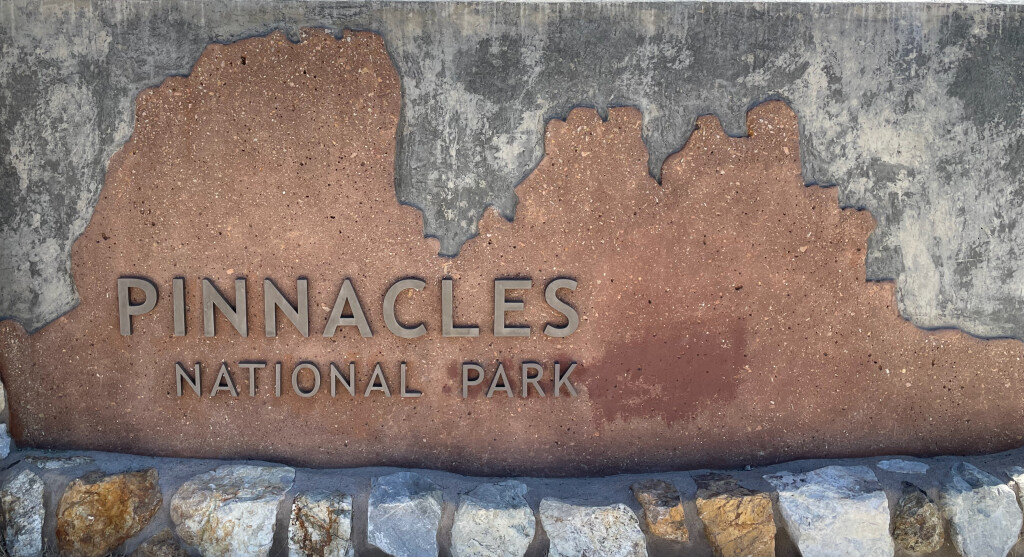 Pinnacles was proclaimed a national monument in 1908 and designated a national park in 2013. Encompassing about 26,000 acres (approximately 42 square miles) puts it near the bottom of all 63 parks in terms of size – however, not in beauty! The park lies 150 miles south of the San Francisco Bay area and 50 miles inland from the Pacific Ocean. There are two entrances (west and east), with no road going through the park to connect those two. One must allow a couple hours’ drive around the park to go from one entrance to the other. The little yellow star marks the park on the map below. 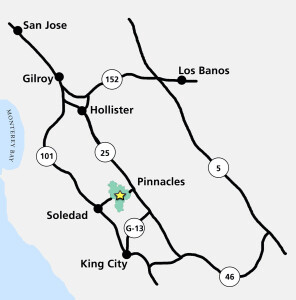 The park’s namesake stunning rock formations, best seen from the west side, are the eroded remnants of an ancient volcano, and today they offer an oasis for hikers, campers, and rock climbers. These photos are from along the easy Prewett Point trail. 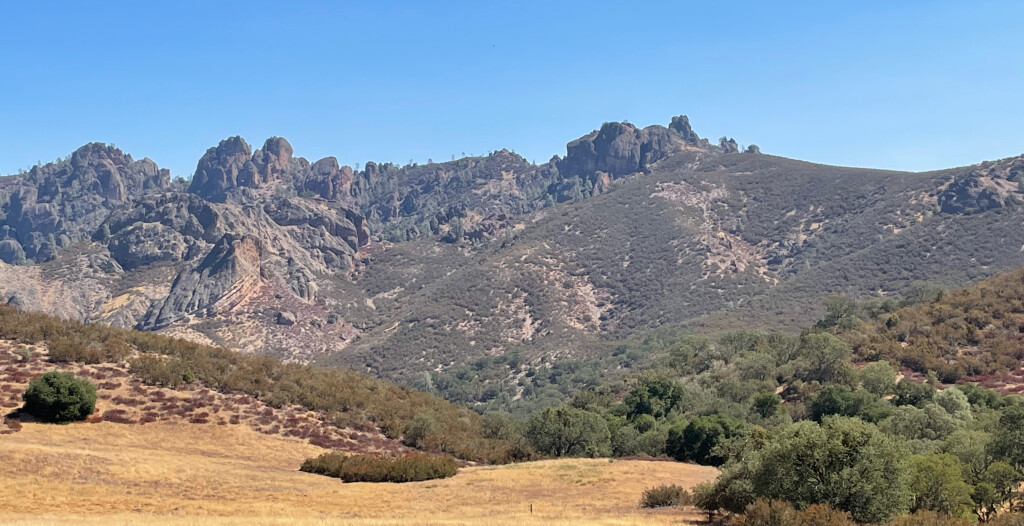 On the east side of the park, one of the places that stood out was the talus caves of Bear Gulch. Britannica describes talus caves as “openings formed between boulders piled up on mountain slopes. Most of them are very small both in length and in cross section. Some boulder piles, however, do have explorable interconnected ‘passages’ of considerable length.” – and that’s what we found along the Moses Spring-Rim Trail: rock formations, talus caves and the Bear Gulch Reservoir.

As we approached the entrance to the first of the caves, we encountered a sign warning us of what we were about to experience. In places there were steps carved out of the rocks; some areas we had to get on our backs to pass through; we found some damp spots and mini bridges passing over rivulets. There were areas of complete darkness and in others, “skylights” were formed by the way the boulders had settled. We exited the caves via a long staircase carved in the side of the wall that took us to the reservoir.

From the reservoir, we traced our steps back through the caves and then followed a family, at a polite distance, as we all headed back down the trail. There’s a trickle of water coming from above providing moisture for the vegetation at the base of the wall, seen at the left in this photo.

Conor Knighton, in his excellent book Leave Only Footprints, writes, “There are around three hundred California condors flying in the wild today, and I’d managed to find one accidentally on a hike I was just doing for fun. Pinnacles is famous for being a condor-spotting location, but a sighting is far from guaranteed. I got out my camera and starting snapping away.” We weren’t as lucky as Knighton. No condors and no sightings of any of the fourteen species of bats found in Pinnacles. But, as we were resting along a trail, a pair of mule deer passed by. In the caves, I looked down and saw (what I learned later to be) a harmless gopher snake – unaware it was non-poisonous I froze in my tracks! One of our little group saw a tarantula by the side of the trail.

Below is the cover of a booklet I made in February 2020 after our planning session for this road trip. It detailed each of the original twelve days we’d mapped out. Notice the sentence at the bottom: “.…A Simple Guide, Subject To Change As We Make Our Way Down The Road“. Little did we know how that tagline would come into play as Covid forced us to abandon Plan A (no travel in 2020); the fires of 2021 caused us to alter Plan B (unable to visit Sequoia NP). Through give-and-take discussions among the four us, we successfully implemented Plan C and simply enjoyed the companionship of being back out on the trails together again. 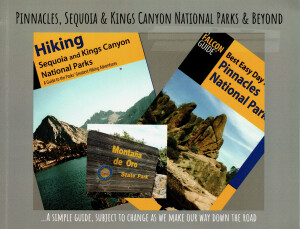