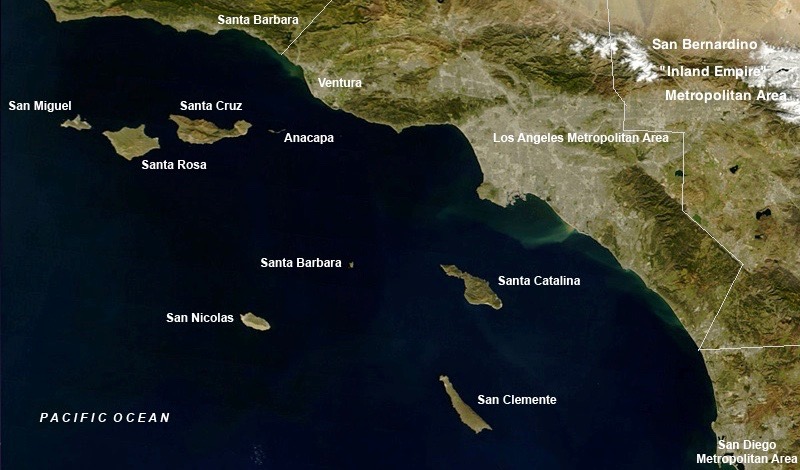 You’ve probably heard of the Channel Islands in the English Channel off the Normandy coast of France – a chain of eight inhabited islands including the major islands of Jersey and Guernsey. Perhaps not so familiar, are the Channel Islands off the coast of southern California. Also a chain of eight islands, five of which (San Miguel, Santa Rosa, Anacapa, Santa Barbara and Santa Cruz) and their surrounding waters constitute Channel Islands National Park. In April 2018, I spent a day with four friends exploring the island of Santa Cruz, the largest of the five.

The park, reached by ferry from either Oxnard or Ventura, is dubbed the “Galapagos of North America” as it’s home to some 145 plant and animal species found nowhere else in the world. There are no autos, no hotels, no stores, no restaurants, no cell service – just a place of magnificent beauty and solitude that offers a wonderful opportunity to (almost) completely unplug.

By 9:30 a.m. we were leaving Ventura harbor aboard an Island Packer ferry. 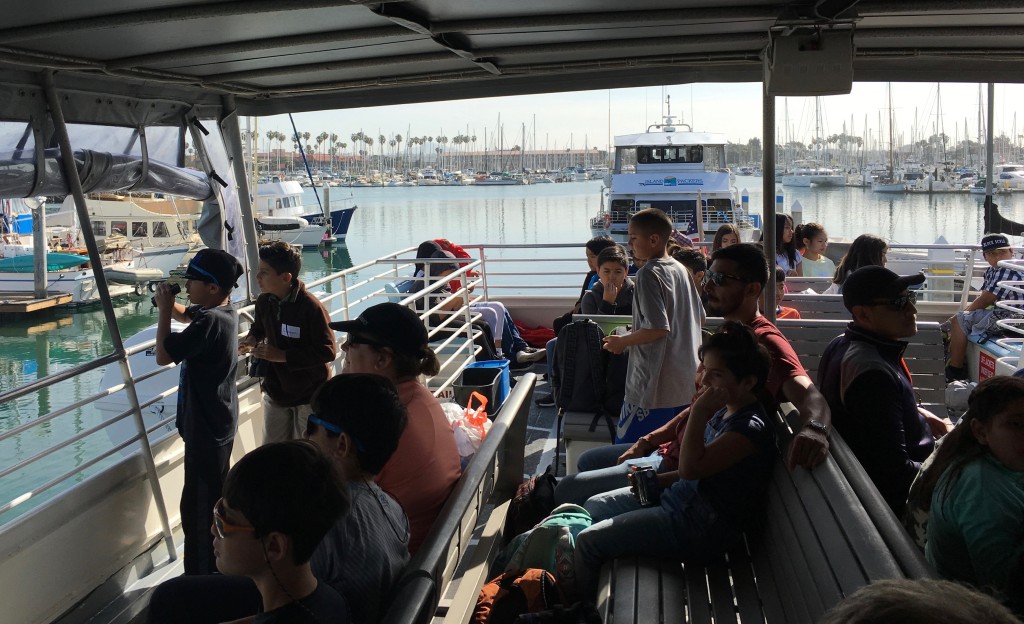 We shared the boat with a large group of area elementary grade students. Their schools were taking advantage of the Every Kid in a Park initiative of the National Park Foundation. Its aim is to “get all 4th graders and their families to experience the places that are home to our country’s natural treasures, rich history, and vibrant culture.” It was great to be among all these enthusiastic young folks!

An hour and a half later, we cruise into Scorpion Anchorage for docking at Santa Cruz. 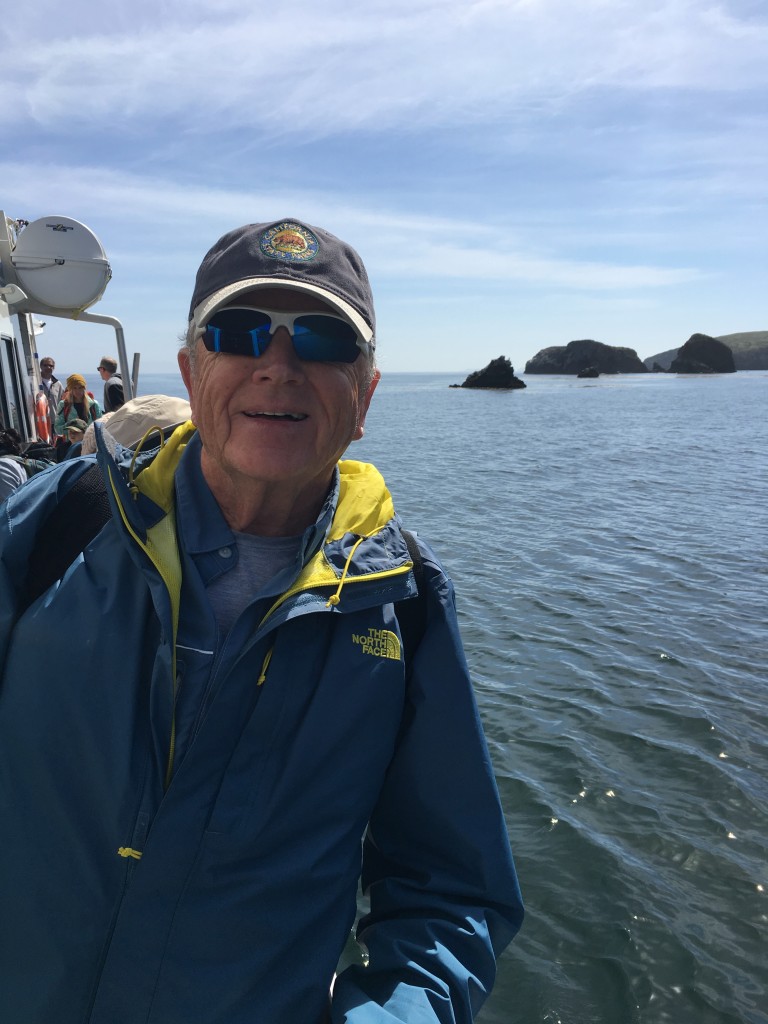 As described on the NP website: “Channel Islands Naturalist Corps (CINC) volunteers represent the park on board local whale watch vessels and educational cruises. Additional training opportunities are available to become certified to lead island hikes in the national park.” Our friend Carolyn, pictured 2nd from left, is one such volunteer. She deferred to the volunteer-on-duty to lead us with the larger group on our initial hike, so she could give the four of us individual attention. It was beginning to get warm, so it wouldn’t be long before we started to peel off layers! 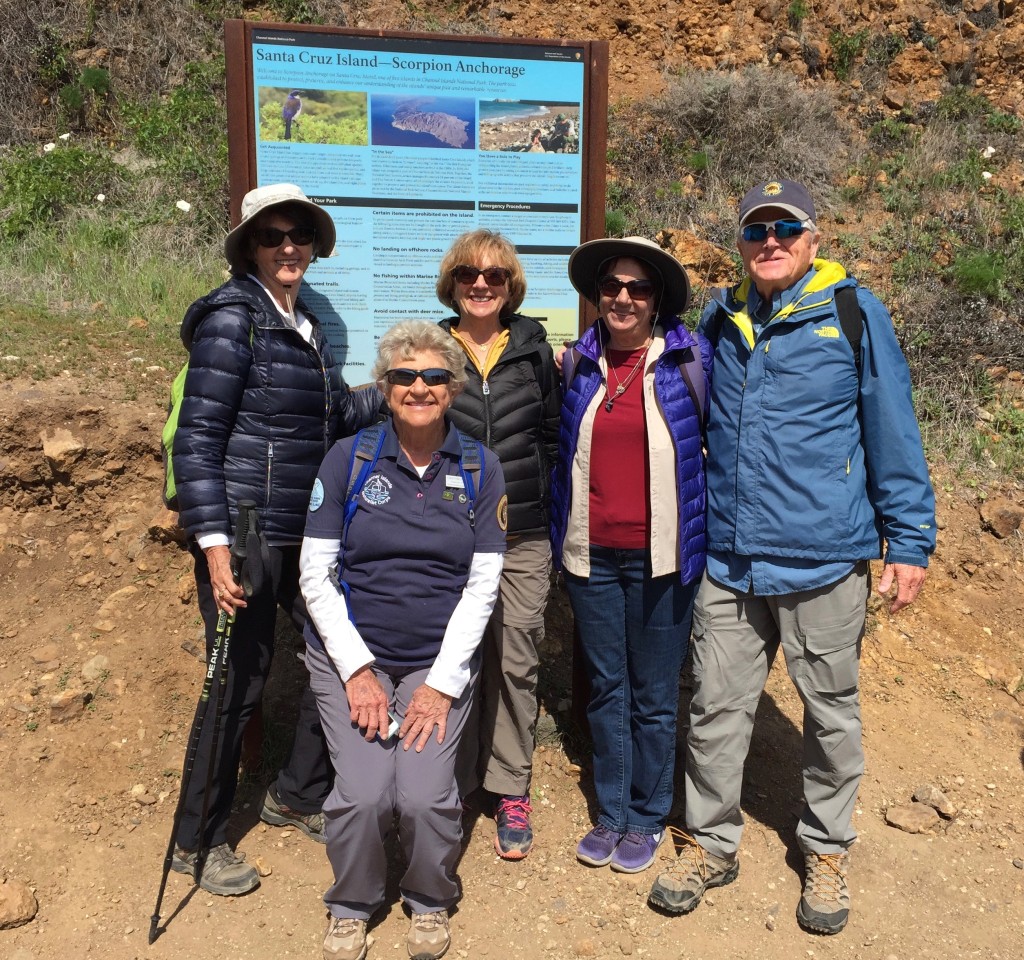 At over 96 square miles, there was no way for us to see everything that Santa Cruz had to offer – especially by foot in 4.5 hours! The park handout described the two mile “moderate” hike on the Cavern Point Loop trail as “Not to be missed. Magnificent coastal vistas and seasonal whale viewing.” Off we went!

Before we began the ascent up to Cavern Point, we passed a campsite. Camping is quite popular in the park and the only way to see so much more of it than day hikers can.

I mug for the camera in this photo, but include it here to show (1) The steady elevation change – a total of 300 ft. from start-to-top; (2) How the trail was underfoot – dirt/rocks/stones, but a fairly easy climb and (3) The white patch of ground over my left shoulder. 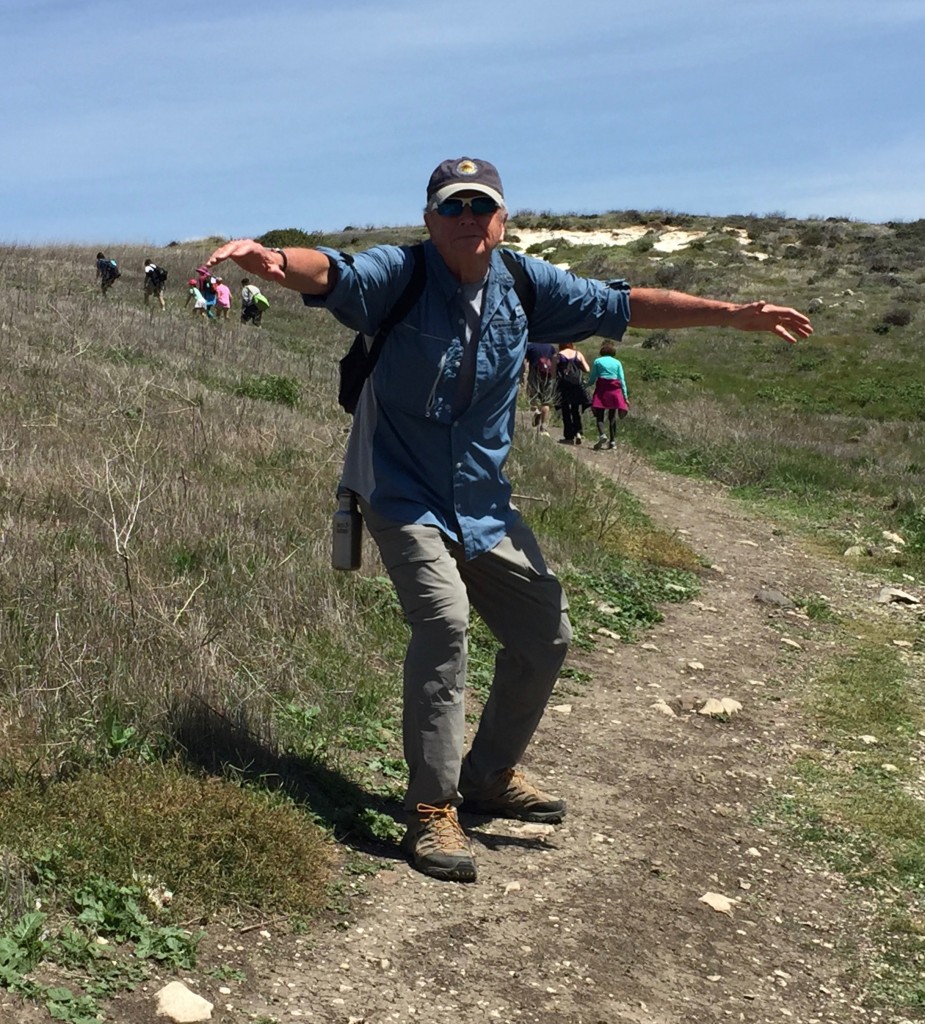 That white patch is diatomaceous earth. Our guide described it as fossilized remains of tiny, aquatic organisms whose skeletons are made of silica. Over a long period of time, these are accumulated in the sediment of rivers, streams, lakes, and oceans. It’s mined and used in many products. Carolyn later confirmed for me the “diatomaceous earth powder” I added to our swimming pool after backwashing, was the same stuff. Amazing what you learn when you least expect it!

An hour and half after arriving on the island, we reach Cavern Point. It was only a mile hike, but we stopped along the way to hear interesting stories about the history of the islands and just to take in the beauty. We found others who preceded us to the top, sitting at the cliffs’ edge.

We saw no whales; however, the handouts’ description of the place was spot on: truly magnificent! 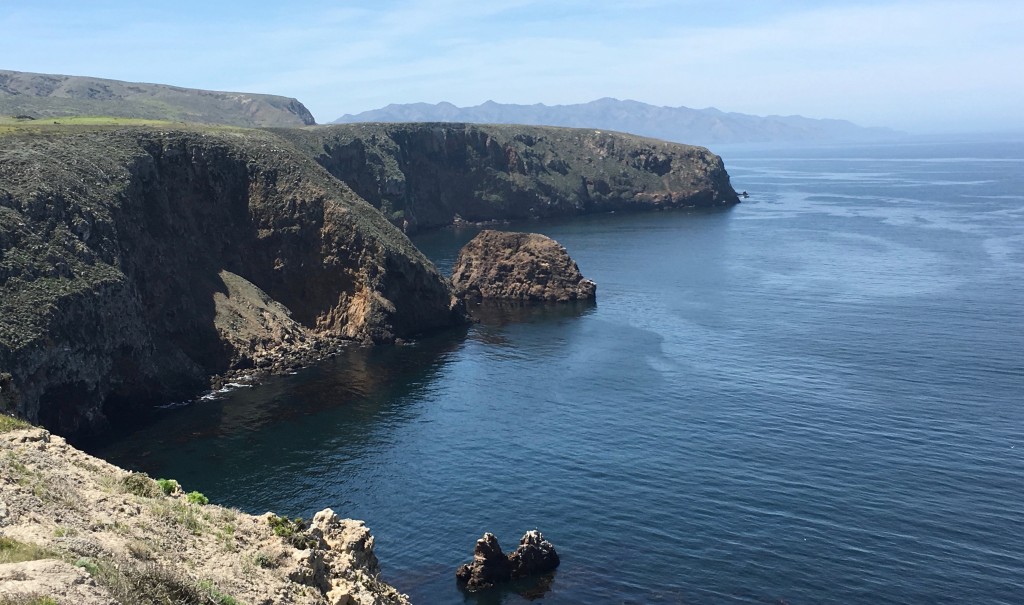 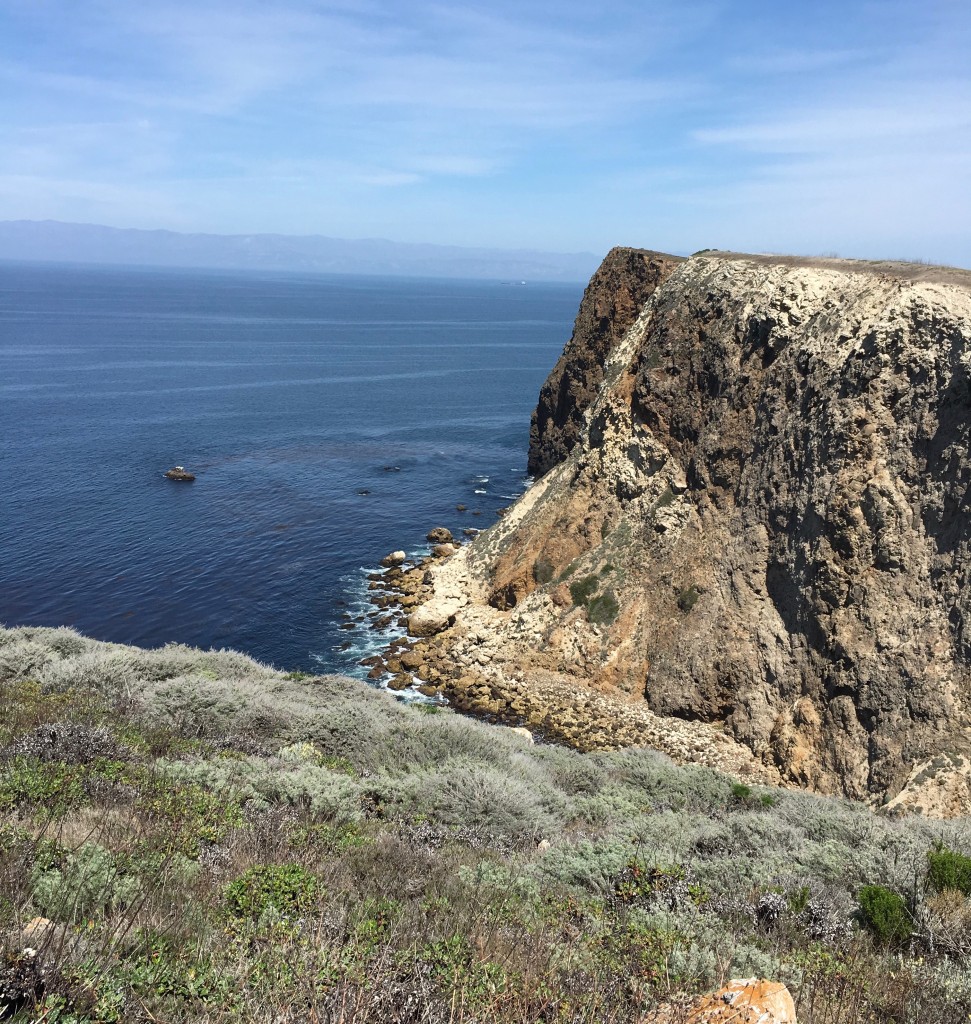 We found a grassy spot and enjoyed the lunches we had packed. New friend Debbie shared fresh dates she’d recently bought from a stand in Palm Springs – best dates ever! Brought back memories of my mother’s homemade date nut bread!

Lunches finished, we hiked a bit on the North Bluff trail toward Potato Harbor.

I felt fortunate to be there while the hills were still green and some plants still in bloom, as I was assured most of it would be gone in a few short weeks as the continuing drought takes its toll. 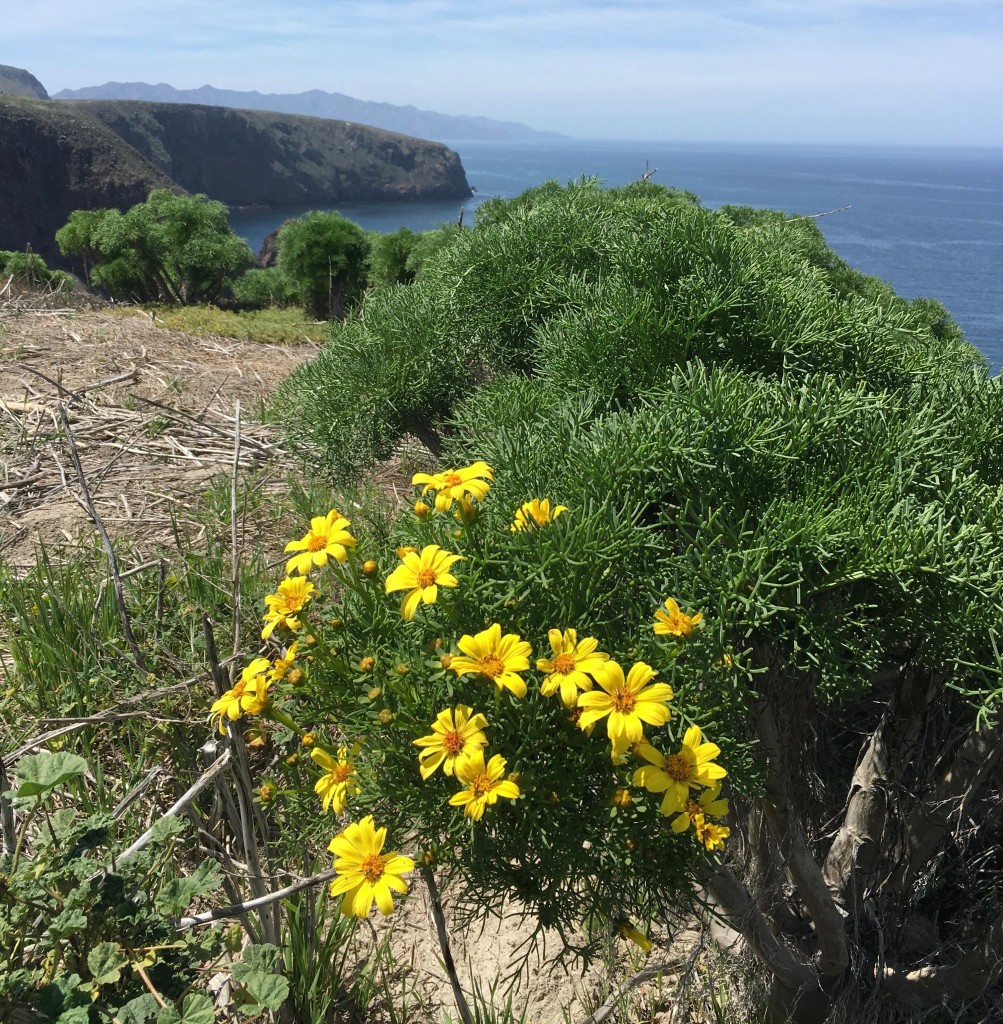 We make our way down the trail. 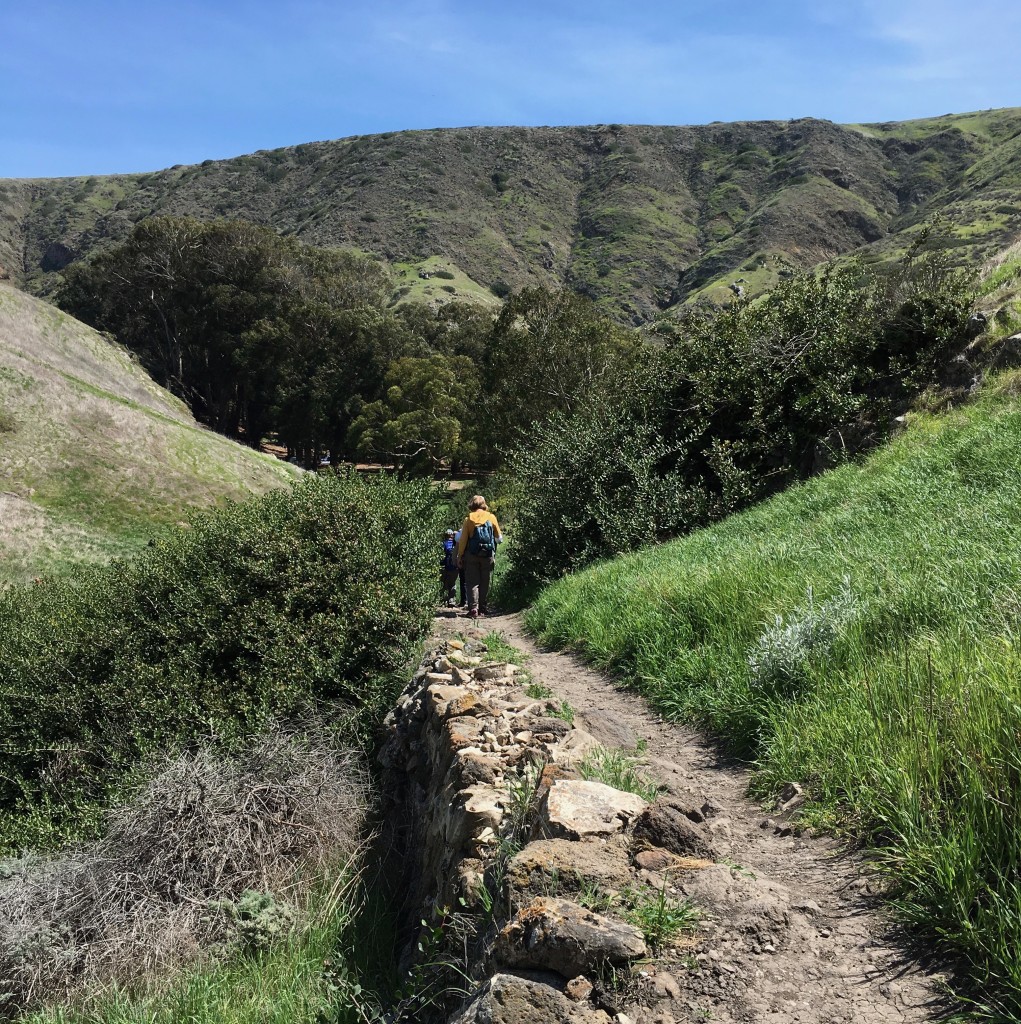 Eucalyptus was introduced to the park islands in the late 1800s. They compete with native plants for limited water and soil nutrients and are generally not liked by environmentalists. But, as I sat on a log enjoying the shade this Eucalyptus provided, along with a strong and pleasant aroma, I was happy it was here! 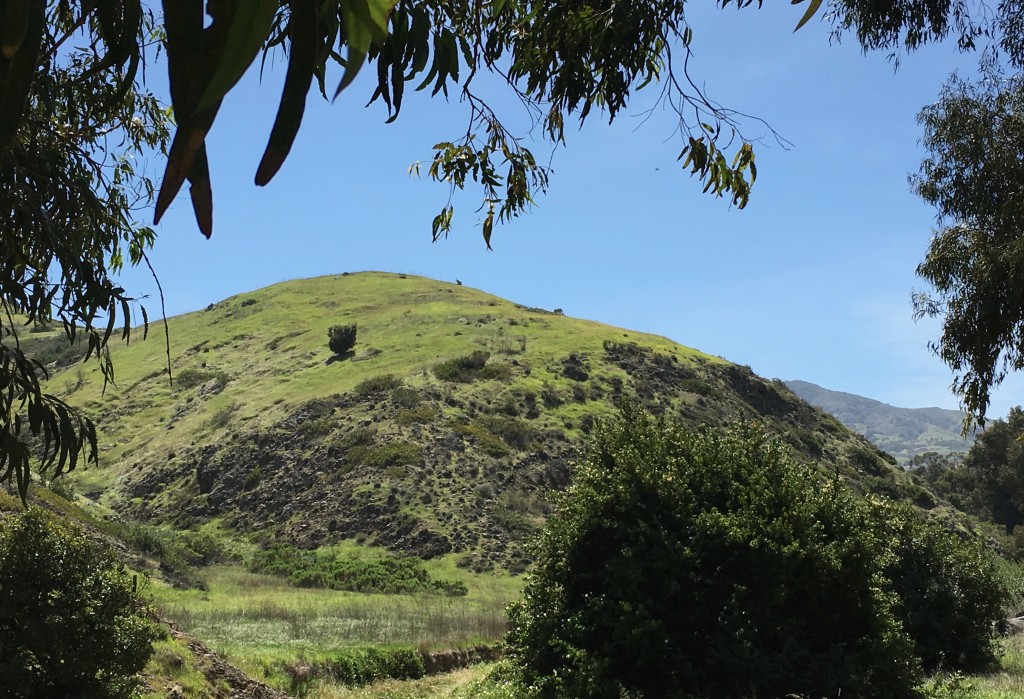 At the outset, I mentioned the Channel Islands are home to many unique species. Of all the birds that breed in North America, only one, the island scrub-jay, is found on a single island – this one: Santa Cruz. Carolyn tried to spot the elusive scrub-jay for us, but was unsuccessful. The island fox only lives on six of the eight islands – they are found nowhere else on Earth. After facing near extinction in the 1990’s, today they thrive. 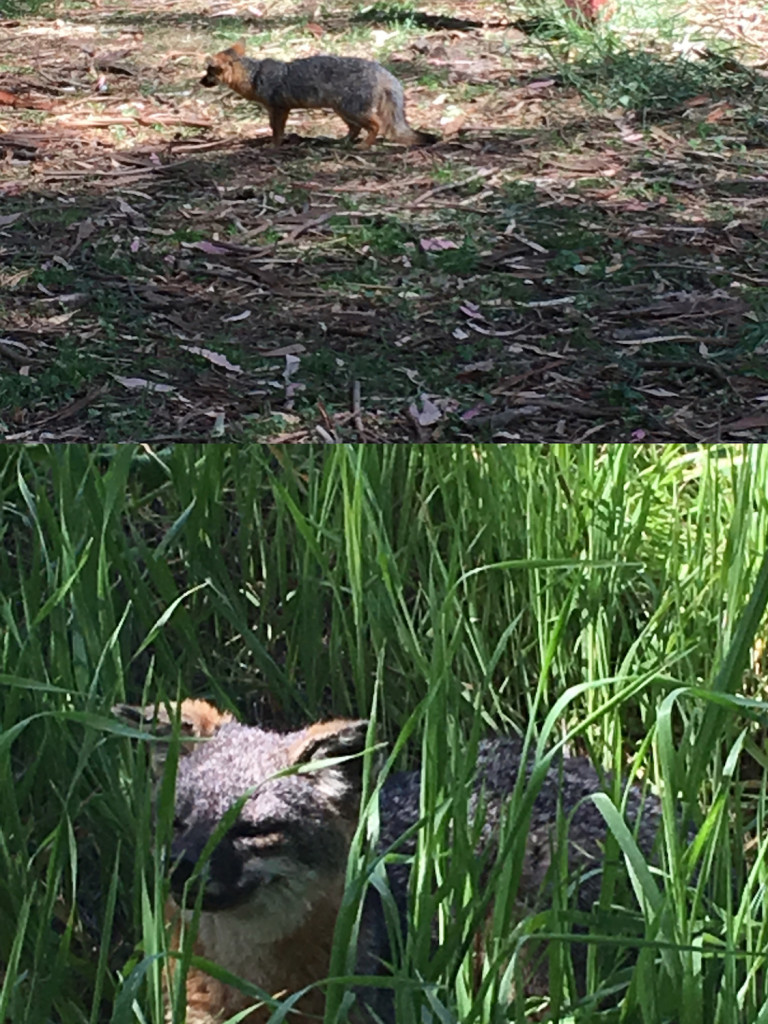 As we await our ride back to the mainland, a group of kayakers finish up their day on the island.

A great day visiting another of our national treasures!